Vancouver, British Columbia, Canada Content from the guide to life, the universe and everything 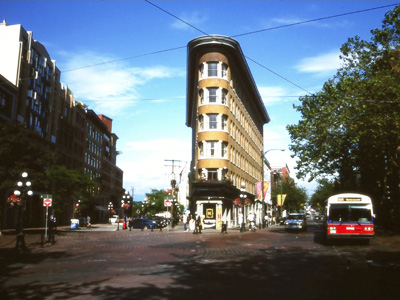 Locally known as the Lower Mainland, Vancouver is situated in a temperate rain forest east of the Cascade Mountain Range. Vancouver is a city of the south-western Canadian province of British Columbia (BC), about 1000km southwest of Calgary and 225km north of Seattle, Washington, USA. The rest of the Lower Mainland includes the cities of:

British Columbia originally joined the confederation because of the promise of the 'national dream'; a rail link that would connect every city, regardless of terrain. That dream was born in the Canadian capital of Ottawa and it worked for a while. However, because of the Rocky Mountain range (which forms a physical boundary between BC and the rest of Canada), Vancouverites tend to look westward, to the sea, and ignore the rest of Canada most of the time. Not inconsequently, Vancouver regards itself as the jewel in the crown of Canada (and is just waiting for the rest of the country to catch up with the sentiment), as well as a 'world-class city'1.

Vancouver is notoriously wet, and the rainy season usually starts in October and stretches to June, after which there is a good 2 - 3 month stretch of clear skies. Thanks to the moderating temperatures of the Pacific Ocean, Vancouver sees snow2 only rarely, and even then only for a few days at a time.

Vancouver has become development mad; older homes with character etched into their façades are being torn down to make way for boxier, less appealing houses that are subsequently sold for exorbitant sums. This spiral is fed by the large numbers of people moving here for work, climate and social activity.

The West End of Vancouver is insanely popular among the young and well-off, although few can really afford the rents there and many are choosing the less-affluent East side where prices are lower.

Vancouver grew up from the waters of Vancouver Harbour, and was a fishing, mining and lumber community. All of these industries have more or less died out. The only remnants of old Vancouver are the downtown buildings which are steadily being renovated by new companies and turned upscale.

The many neighbourhoods that litter the city date back to those early days of the 20th Century. Each one grew up on its own and was later incorporated into the city; Kerrisdale, Shaunessy, Marpole, Kitsilano, Point Grey and Oakridge to name but a few.

The bizarre address-system used by the city is a result of starting at the water's edge; the downtown/West End area sits on land that is at almost 45° to the left of the rest of the city. Consequently, 1st Avenue is a couple of kilometres from the actual start of the house-numbering, and does not match the avenue numbers that cross the city.

'First Nations' is the name that the aboriginal peoples have given themselves in their dealings with the Canadian government, and there are many nations scattered across the vastness of the country. In the Vancouver area there are four major nations or nationalities: the Coast Salish, the Squamish, the Musqueum, and the Sechelts. Around the country, their cultures are in grave danger of being wiped out completely, as some already have been, by the influence of existing in a predominantly white world.

Canada has two founding cultures- the English and the French - and therefore two official languages in which every government document and product label must be printed. However, English usage far outstrips the French in British Columbia.

Technically, Canadian English (which is almost identical to British English) is the root of all English taught in schools nationwide, although the influence of American media has left many with American pronunciations and slang variations of spoken and written language. Purists see this as a corruption of the Queen's English and in many ways it is. However, this is the way languages evolve. Accents vary across the country, and most Canadians can tell a Vancouverite from a Torontonian by their accent.

Victoria, on nearby Vancouver Island, is the provincial capital. The Parliament there provides some of the best material for comedians of all stripes.

The feeling of Western alienation that afflicts all provinces west of Ontario springs largely from the fact that the two most populous provinces (Ontario and Quebec) usually have sufficient votes in the national Parliament that they can elect a government by themselves while the rest of the country is consulted and ignored.

A vibrant arts community thrives in Vancouver. Granville Island Public Market is home to at least four different theatre venues, with more scattered across the city. Live music and artisan fairs are also common, especially outdoors during the summer.

The major cinema chains, Famous Players and Cineplex Odeon, carry mostly American fare. However, there are some independent and international contributions turning up and many independent cinemas run films from international sources.

Vancouver is home to two independent television stations: BCTV (actually in Burnaby) and CKVU, which is part of the CanWest/Global network. The region's main Canadian Broadcasting Corporation facility is located in downtown Vancouver. Partially because of the way the Canadian Radio-Television and Telecommunications Commission has arranged broadcast financing in this country, there's more money to be made by carrying American programming than there is in domestic fare.

According to the new head of Rogers Cablesystems, Vancouver is one of the most wired cities in the world. Almost every house has cable access and most residents assume that everyone receives cable-delivered programming. Depending on the service-provider, most households are able to receive a full-spectrum of channels from both America and Canada. The local PBS affiliate, KCTS 9, in Washington State provides the majority of non-commercial programming for Vancouver.

Vancouver is also host to a number of software production/service companies that produce everything from computer games to communications programmes. In the past year, a large number of new media schools have appeared, all churning out students that are skilled in the latest hardware and software technologies.

Vancouver has drawn a huge amount of American television and film production because of the number of accessible filming locations within a reasonable distance of the city, a weak Canadian dollar, and the availability of sound stages and capable crews. Vancouver receives so much American television programming that it seems only fair some of it be filmed here. In recent years, the Canadian skill in animation (both computer and classical cell) has also drawn the attention of Disney and other cartoon companies.

1A 'world-class city' means a good place to host a venue, act as a headquarters, develop some groundbreaking technology, or otherwise invest large sums of money. This supposedly mollifies the legendary national self-esteem problem Canadians are notorious for, which is symptomatic of living next to a very loud, powerful and proud nation.2Motoring in Canada, especially Vancouver, during or after a snowfall is nerve-wracking; most motorists have trouble driving in the rain (strangely enough), but when snow lands, they're paralysed. Few people know how to handle their vehicles properly, which infuriates those that do. People from almost anywhere else in the country marvel at the madness that results from a 'nothing' snowfall, when they're routinely used to a metre or more.