Calgary, Alberta, Canada Content from the guide to life, the universe and everything 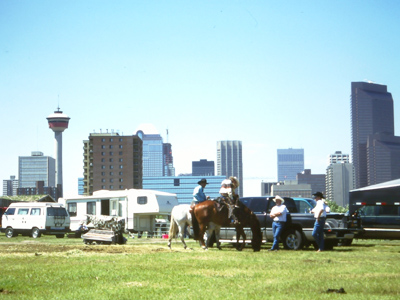 Calgary is a major city in the province of Alberta and is situated in western Canada at the crossing of the Bow and Elbow rivers. Affectionately known as Cowtown1, Calgary currently has a population of 800,000 and is one of the fastest growing cities in Canada.

The growth of Calgary is mostly due to the oil business. Local companies began extracting this formidable natural resource just outside the city limits, and have expanded their oil operations to countries worldwide. Calgary had the distinction of holding the 2000 World Petroleum Congress, which just goes to prove their importance in worldwide oil production.

The temperature in Calgary fluctuates quite considerably. In winter, the temperature can drop as far as minus 40°C, although this is rare. In summer, the temperature may rise as high as 35 °C. Note that if you complain about a very low temperature to a native Calgarian, you will invariably get the same response: '...yeah, but it's a dry cold!'. This dry climate means that sweat will evaporate quicker when it's hot, cooling you down in summer, and cold winds will not have their usual 'bite' to them. However, be prepared to drink more water and have a dry feeling in your throat for a while when visiting the city

Navigating Calgary for the first time can be very confusing. There are a few reasons for this. One is that major highways are referred to as 'trails'. When a non-Calgarian hears the words 'MacLeod Trail', they may picture a nice dirt path through a forest, with a few wild deer nibbling at grass. Don't ever try to walk down a trail within Calgary city limits. In truth, MacLeod Trail is a major traffic artery at the heart of the city, albeit with a few too many stoplights and turn-offs.

Another source of confusion is the quadrant system. It is simple to explain, but very difficult to master. In Calgary, streets generally run from north to south and avenues from east to west. In addition to this, building numbers on avenues refer to the streets they intersect with, and vice-versa. So, if you want to go to 500 6th Avenue then you know that it will be on the corner of 6th Avenue and 5th Street. The problem is that there are four such locations. There is 5th Street East and 6th Avenue North, or 5th Street West and 6th Avenue South, and so on. The only way to solve this problem is to know which quadrant you are in; NE, NW, SE, or SW. This system has confused many a visitor to the city2. On second thoughts, you can always take the bus.

Calgary has an efficient system of public transportation. A major part of this is its C-Train LRT3. The C-Train has three legs, the south Calgary leg, the north-west leg that goes to the University of Calgary, and the north-east leg that heads towards the airport. All of these trains pass through downtown Calgary, which is a free-ride zone anytime of day. Buses can usually access those areas not accessible by the train. Maps and bus times are posted online at the Calgary Transit web site

It is also notable that Calgary is extremely tolerant to pedestrians. Unlike some cities, where crossing a road is akin to acting upon a death wish, Calgary drivers almost always stop to let you cross. For this reason, Calgarians often wander straight onto a road, barely checking to see if anything considerably bigger and heavier than them is heading in their direction. The effect is rather disconcerting for anyone who is not native to the city.

The city of Calgary seemingly suffers from a mild image crisis. While trying to expand itself as a hotbed of forward-thinking technology, it also advertises its western heritage to tourists. The results create confusing oddities such as 'western wear Fridays' for businessmen and 'The International Year of the Cowboy' in 1998. Yet despite the commercialisation of the western image, expect to see a few genuine cowpokes walking the street.

Cowboy commercialism hits record highs in the summer during the Calgary Stampede. This combination of rodeo and festival, usually held the second week of July, is a prime magnet for tourist dollars. Some of the most popular events at the Stampede are the chuckwagon races. In these events, light metal chuckwagons are pulled around an oval dirt track by teams of horses. This is considered one of the most dangerous events at the Stampede, for racers and horses alike.

Yet another cow fad in Calgary is provided by Udderly Art. This bizarre project comprises dispersing painted fibreglass cows throughout the city to benefit local artists and non-profit organisations. What basically happens is a local artist receives a full-size plastic cow, paints it in garish colours, and then rents it to major companies to display in or around their buildings. The upshot of all this is that the downtown core is now littered with the things. Whether this is a good thing or not is a matter of personal taste (or lack of it).

When in downtown Calgary, a good place to be is Stephen Avenue. This section of cobblestone street is closed to traffic most of the day. It is a pleasant place to eat lunch, meet with friends, do some shopping, or do a little busking4.

Another interesting part of town is Kensington. This area, just north-west of downtown, easily accessible by the C-Train, is filled with quaint independent shops, and an insanely huge multitude of used book stores.

If, by chance, you visit downtown on one of those frigid winter days, make use of the Plus 15 network. The Plus 15 is a series of pathways that connect the second floors of nearly all the office buildings in the city. Entry to the Plus 15 walkways are usually denoted by a small pictogram of a cowboy walking up a staircase.

If you're looking to go for a drink, there are quite a few places to visit in Calgary. Consistent with Calgary's cowboy image, one of the most popular bars in town is 'Cowboys'. On the inside, it resembles a mix of an old-west saloon and a nightclub. The DJs play an odd mix of popular dance and country, while the dance floor switches from high-energy dance to two-stepping and line-dancing. Thursday nights are usually 25-cent draft night, which means very cheap, though not very good, beer is for sale.

Another recommended bar is Shanks'. Shanks' has two locations; one in the north, the other in the south. Being billed as a sports bar, Shanks' features as a dozen or so television and rear-projection screens showing sports channels, 'virtual golf' stations, horse-race betting, and mini-golf. There are also at least six pool tables at each location.

Other bars and clubs in town can be found along 1st Street South or 17th Avenue SW. One place to avoid is the Bermuda Triangle.

One of the most popular museums in town is the Glenbow Museum. This museum hosts numerous art and historical exhibits. It is located at 130 9th Avenue SE.

1This is due to its western heritage, and not the appearance of its inhabitants.2Canadian comedian Lorne Elliot has a whole comedy routine based on his maddening experiences with driving in Calgary.3LRT stands for Light Rail Transit, although it is sometimes called Little Ralphie's Train, named after Ralph Klein who began its construction when he was mayor and is now Alberta's Premier.4Busking is only possible if you have paid the necessary fees for a busking permit.