West End of Vancouver, British Columbia, Canada Content from the guide to life, the universe and everything 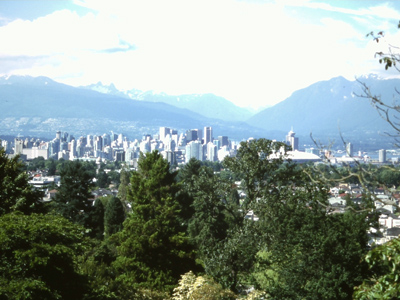 English Bay Inn, is a bed and breakfast establishment owned and operated by Bob Chapin. Bob will make you welcome with glasses of sherry and a short talk about where to go and what to do in the West End of Vancouver, British Columbia, adjacent to Stanley Park. According to Bob the West End is perfectly safe to walk around in, even at two o'clock in the morning. Vancouver does have a problem with increased heroin addiction which translates to an increase in property crime usually confined to the smashing of car windows and the stealing of anything in the car that might provide funds for the addict's next fix.

Visitors are advised not to leave anything visible in the car that might attract attention, even an empty shopping bag. The best thing to do is to park the car in one of the spaces available in the alley behind the inn and go everywhere on foot or by public transport.

The Pleasing Absence of Sirens

Vancouver has a pleasing absence of sirens, and a general air of peace and quiet; the West End is residential and boasts the densest population of high-rise living, greater than that found in New York. Accommodations at English Bay Inn are very comfortable consisting of snug rooms and larger suites, a few of which look onto a small walled garden at the rear of the house, overlooked by the surrounding high-rise apartments.

Each morning Bob Chapin provides an ample breakfast at a table set for ten, where you can listen to opera, chat with the other guests. Bob has lived in the house for 20 years and been an innkeeper for nine, before which he was a teacher of English Literature. The Fish House restaurant in Stanley Park is five minutes walk down the street. Despite a name that evokes a picture of a dockside gutting shed, the Fish House is a good restaurant with reasonable prices. A preprandial1 stroll along the seafront of English Bay helps work up an appetite.

Canadians in British Columbia are by nature reticent, polite and somewhat indecisive, yet the waiters at the Fish House are solicitous and will write down the names of several places where they feel it's worth eating. Immediate impressions of Vancouver being a town of young people may be coloured by the demographics of the West End. Bob Chapin explained that the population is made up of mainly young single people and couples, and older folk. As soon as children are born families want to move from their apartments to a house with grounds in which the children can play. Vancouver is cosmopolitan in composition and tolerant. Tolerance and the inherent feeling of safety makes Vancouver attractive to gay people wishing to live in less bigoted and narrow-minded surroundings.

Footpaths are divided to accommodate both pedestrians and those going on in-line skates and bicycles; pedestrians should avoid encroaching on bicycle paths as the bikers do get a bit shirty, and vice versa. Public transportation is good by trolley bus and there is a useful mix of commercial and residential property that puts everything within walking, cycling, or skating distance. Many people use in-line skates as a means of transport.

High-tech industries abound and a lot of computer work is done from home. Vancouver supports a motion picture and television industry. Until recently the popular X-files television series was produced there, it being a cheaper location than Los Angeles. It is not unusual to see film crews at work on Jerico Beach, across the water from the beach at English Bay. On the seafront at English Bay there is a tall building with a large pine tree growing on the roof, above a structure that looks like the discus-shaped hull of the Starship Enterprise; you may be led to believe that Leonard Nimoy lives there. In fact, a powerful telescope mounted on the roof of a nearby building revealed a bearded chappie hacking at a computer in a room on that floor.

Walk Widdershins by the Sea Wall

Walk by way of the sea wall, widdershins2, around Stanley Park, a matter of six or seven miles along paved footpaths. Leave from the Inn by nine o'clock and be in time for lunch at the Tea House Restaurant in Stanley Park overlooking the bay and its shipping. On the way keep an eye open for sea lions basking on the rocks offshore.

Then visit Granville Market, a defunct industrial district renovated as a pedestrian precinct with covered markets containing a cornucopia of produce and products. In the open air buskers, auditioned and licensed and paid for by the city, go through their evolutions. Drive out to the Endowment Lands where development is prohibited in perpetuity and take a look at the University of BC (UBC) that is home to the museum of anthropology, reputed to be the best in the world.

Walk out onto the pier at Jerico Beach, and see the city across the water spread out from the sea back into the foothills of Mount Seymour. Then walk up to the Sylvia Hotel and into the lobby where you can see some panoramic photographs of the area taken in 1919, when the Sylvia was the only tall building, but which is now dwarfed by the newer construction; the Sylvia exhibits a faded glory. Apartments can be had reasonably priced, starting at about a Canadian dollar per square foot, going up in price to hundreds of dollars. Most apartments have balconies on which to sit and enjoy the air.

The Silence of the Woods

Drive out through North Vancouver to Lynn Canyon and Twin Falls and walk in the silence of the woods of cedar, hemlock and spruce. North Vancouver is wetter due to the rising ground and moist onshore air, it too appears to be a good place to live with verdant neighbourhoods and newer, attractive, high-rise apartments with spacious balconies and 'floor to ceiling' glass panels that command excellent views in all directions, especially since the buildings are located on high ground above the city proper.

Take lunch in North Vancouver at the Tomahawk Restaurant, an eatery patronised by local people, and then drive to the top of Mount Seymour for a broader view of the surrounding land. Mount Seymour is a matter of 15 or 20 minutes drive from town and the transition from urban to rural is very quick. Descending the Mount drive through downtown Vancouver, Gas Town, and the Robson Centre, get directions to the Casa de Gelato or International Ice Cream Factory and taste Pernod and basil flavoured ice cream - one of several score weird and wonderful flavours.

Vancouver is cosmopolitan, - an older-world Britain with modern American conveniences, all mixed with Canadian charm.