'Biggles' - by Captain WE Johns Content from the guide to life, the universe and everything 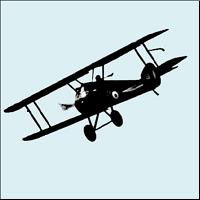 Biggles, the series of 98 books by Captain WE Johns, has had a bit of a bad press in recent years, the writer in particular being denounced for racism in his hatred of all things Teutonic. This shouldn't be surprising as, at the time when most of the books were written, a natural suspicion of all things German and, indeed, anything outside the UK, was not so much encouraged as compulsory in Britain.

The books, if read in chronological order from Biggles' perspective, start with the arrival of the young James Bigglesworth of the Royal Flying Corps in France, where he soon learns that his training has been woefully inadequate. He is taken under the wing of Mahoney, and rapidly becomes a pilot of great skill. Through the succeeding books he meets up with the cast of characters which forms the core of the series: Raymond (eventually Air Commodore Raymond), Lord Bertie Lissie, Algy Lacey and Flight Sergeant Ginger Hebblethwaite. These stories were often taken form Johns' own experience, and many of them are re-tellings of actual events. After the war Biggles and his compatriots set out on a series of adventures and special missions of varying believability. Although his writing was marred by an irritating tendency towards the 'with one bound he was free' school of crisis resolution, Johns generally provided fast-paced and technically acceptable (in terms of aircraft details) stories.

In reality the books were written in an order dotted about Biggles' career with some abandon. Johns would write one or two stories set in the war, then return to the post-war period, and back to war and so on.

Are they any Good?

The books set in the First World War and shortly afterward are straightforward tales of derring-do1, very much along the Boys' Own Adventure lines. The good guys were clearly distinguishable from the bad, and the bad guys always had their come-uppance. All good clean fun and harmless reading for any aircraft-mad adolescent.

With the start of the Second World War, the Biggles books gained a fresh momentum as Biggles was recalled to the RAF. Sadly the expectations of the readership appeared to have gone beyond simple flying adventures, and some of the plots were less than believable. It is not really possible that a group of English airmen could pass as natives in quite so many countries without immediate detection. Especially since one of them is a monocled Lord. However, place your credulity on the nightstand when you take up the book, and the narrative remains as strong as ever.

After the Second World War, Johns had the idea of recruiting Biggles and his compatriots into a special airborne police unit, commanded (surprise, surprise) by Raymond. These stories are arguably some of the best, offering a slightly less two-dimensional cast of characters.

Although never attaining the status of high art, the Biggles books are reliable and undemanding reading, and have a strong and devoted following.

If you feel like dipping your toe in Biggles' water, here is a recommended reading list which covers representative books from each phase of Biggles' career:

The best place to pick up a Biggles book is at a jumble sale or second-hand bookshop.

Although Johns died in 1968, whilst writing the story in which Biggles was to retire (Biggles Does some Homework), all the books are very much rooted in the 1930s and '40s; an age when things were much simpler. Johns knew his audience well, and consistently gave them what they wanted. It is interesting to speculate on what Biggles would have made of some of the recent deployments of the RAF.

There is an International Biggles Society, although it is entirely possible that some of their members might think Biggles was real.

There was also a rather regrettable film, which, despite the best efforts of the late Peter Cushing singularly failed to capture the spirit of the books.

1Derring-do is an action that shows courage.