'She'll be Coming Round the Mountain' Content from the guide to life, the universe and everything 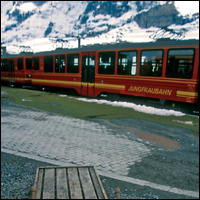 Based on a negro spiritual, this US folk song is known and sung by children all over the world. There are many versions, some of which are not suitable for consideration on a family site. Many versions are personalised to a given situation, or invented during a session. Bawdy versions tend to have a chorus based around:

Singing I will if you will so will I

Family versions may have a chorus of:

The earliest recognised version of the song using the same melody is called 'When the Chariot Comes'. It seems to have developed among negro slave workers in the American South. The song is categorised as a call-and-response song where one person sings the opening line and others either repeat it or offer the response. These songs or chants enabled workers to stay in time when working on organised tasks or moving when constrained by leg chains, as it was essential that everyone on the chain moved at the same time.

The army also uses chants for this purpose, to keep recruits in time, or to keep up the pace of a march.

The most commonly used original lyric is easily recognised as the base of the children's song:

The song goes on to provide the answer:

King Jesus, He'll be the driver when she comes.

The first written record of 'She'll be coming round the mountain' appears in Carl Sandburg's seminal work The American Songbag in 1927. Sandburg was a poet and historian, but he was also a folk singer, and collected these songs as he travelled around the USA.

This collection of 280 songs and tunes represents the grounding of US musicology, if you think that when it was published Pete Seeger was a child, Burl Ives was still at school and Woody Guthrie was just 15 years old. It is not surprising it's still in print.

Sandberg excluded nothing, and you'll find German immigrant songs with African American songs. There are songs about labour, gold mining, sailing, lumbering and railroading. It's in this last category that you'll find 'She'll be Coming Round the Mountain'.

The Baltimore & Ohio Railway was formed in 1830 and 14 miles of track opened that year. Before long they were joined by The Mohawk & Hudson, The Saratoga, The Columbia, and others. In 1846, the Transcontinental Railroad was mooted. But it wasn't until the Railroad Act of 1862 that the government added its support, and on 10 May, 1869 the Union Pacific Railroad met with the Central Pacific at Promontory, Utah, and it became reality.

Films and contemporary pictures gave the impression that the rail-bed was built with Irish, German and black labour. In reality, the largest part of the workforce was Chinese. Images of negro labourers driving the piles across the states still persist, and the songs that have been passed down echo this belief:

The most common verses of the song have the various lines:

There are many other versions, ranging from the specific to the bawdy, to comedic. It has been adapted for football chants, and even twisted for political purposes. There are foreign language versions, too. In Germany they sing Tante aus Marokko (Our Auntie from Morocco), but the tune is the same. And of course there are children's versions which include noises and actions:

But all of them leave one burning question:

Mary Harris was born in County Cork, Ireland, and went to the USA with her parents as a child. She trained to be a teacher, and in 1861 married George Jones, an iron moulder and union organiser from Tennessee. They had four children, but George and all of the children died in the yellow fever epidemic of 1867. She then moved to Chicago, where she worked as a dressmaker until she lost her shop in the 'Chicago Fire' of 1871.

Over the next few years Jones became more and more involved in the union movement. She was involved in the rail strike of 1877 in Pittsburgh. In 1899, she was organising the coal fields in Pennsylvania. In 1911, she was in Mexico; she was arrested at Homestead in 1919; and was working with dressmakers in Chicago in 1924.

Her reporting of the issues was in a language ordinary people could understand. This is from an article originally published in The International Socialist Review in March 1901:

I visited the factory in Tuscaloosa, Ala., at 10 o'clock at night. The superintendent, not knowing my mission, gave me the entire freedom of the factory, and I made good use of it. Standing by a siding that contained 155 spindles were two little girls. I asked a man standing near if the children were his, and he replied that they were. 'How old are they?' I asked. 'This one is 9, the other 10,' he replied. 'How many hours do they work?' 'Twelve,' was the answer. 'How much do they get a night?' 'We all three together get 60 cents. They get 10 cents each and I 40.' I watched them as they left their slave-pen in the morning and saw them gather their rags around their frail forms to hide them from the wintry blast. Half-fed, half-clothed, half-housed, they toil on, while the poodle dogs of their masters are petted and coddled and sleep on pillows of down, and the capitalistic judges jail the agitators that would dare to help these helpless ones to better their condition.

She was described as 'the most dangerous woman in America' by Reese Blizzard, the West Virginia district attorney. Sandberg suggested this was the figure the workers sang about: the 'she' who was 'coming round the mountain'.

The identity of 'she', however, doesn't worry the countless adults and children who have happily sang along on journeys and round campfires.