Brentwood, Essex, UK Content from the guide to life, the universe and everything 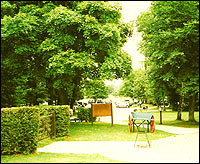 With famous sons such as Douglas Adams, Cliff Richard, Noel Edmonds and Griff Rhys Jones, many might think that Brentwood is a fabulous and exciting place to live. However, none of these celebrities actually lived in the town. They all commuted in to attend Brentwood School.

Brentwood began as a small clearing in the middle of a forest, created by fire, with the name of 'Burntwood'. A few people began to settle there and, because it was on the crossroads of the old Roman road from Colchester to London and the route the pilgrims took over the Thames to Canterbury1, it grew into a small town. In 1227 a market charter was granted, and this helped the town to continue growing.

As the Roman road grew busier, Brentwood became a major coaching stage, with plenty of inns for overnight accommodation as the horses were rested. This hasn't changed; there is an above average number of pubs in the area - possibly due to the army being stationed at Warley Barracks in the town (closed down in the 1960s). Some of the pubs date back to the 15th and 16th Centuries.

As the railways arrived in 1840, the short journey to London Liverpool Street station made it easy for workers to live in Brentwood and commute into work. Many new houses were built around the station at around this time - nearly half of all Brentwood residents still commute outside the area to work.

The Warley area of Brentwood is not far south from the railway station, and the military has associations with the area going back over 200 years. It also had strategic importance during the time of the Spanish Armada - it was used as a meeting place for contingents from eight eastern and midland counties (900 horsemen assembled here) to then travel on to Tilbury.

The local common was used as a military camp in 1742, with thousands of troops camped there during the summer months. It was an ideal base, as it was less than a day's march to Tilbury, where the troops would leave for foreign service. Dr Johnson visited in 1778, staying for five days. The camps were made permanent in 1804, with space for 2,000 cavalry. 116 acres of land were bought and used for two troops of horse artillery - 222 horses, with 306 soldiers of varying ranks and ten officers - a hospital and half a battalion of the Rifle Brigade.

In 1842 the East India Company's barracks at Chatham became inadequate, and they purchased the land to move their troops in. Accommodation was created for 785 recruits and 20 sergeants with new buildings for the officers. Married family housing was also provided, and a chapel. In 1856 further building work was carried out, and a total of 1,120 men were housed there every year. After training they were shipped out to India.

The area and men were absorbed into the British Army after the Indian Mutiny in 1857, and in 1861 the barracks was bought by the War Office. By 1881 the many different regiments had evolved into the Essex Regiment, which saw active service in the Boer War and both World Wars. The barracks served as a training centre and depot for the Essex Regiment for a number of years after the war, with many National Servicemen serving their first weeks here, but with the ending of conscription in 1960 the barracks closed.

My Granddad joined the army underage because there was no work. He'd been turned down as too young at one recruiting office, so at the next one, he lied. He served the Essex Regiment, and was closely associated with it all his life. When he died the service was held in the barracks chapel, and his ashes are now (secretly) buried under a tree in the chapel grounds.
- Author

During the war, over 1,000 bombs were dropped on Brentwood, with 19 flying bombs (doodlebugs), 32 long range rockets (V2s) and many incendiary bombs and parachute mines. 5,038 houses were destroyed, 389 people were injured and 43 died. It should be born in mind that Brentwood had been considered safe enough to evacuate London children here - 6,000 children arrived in September 1939 alone.

In the 1930s and 1940s there were three cinemas in the town. The local 'fleapit' was close to the station, and so the closest to the barracks. These days, the town has no cinema at all. The last remaining cinema closed down permanently after asbestos in the roof made the costs of refurbishment prohibitive. Luckily some facilities in the town remain:

Brentwood Centre - providing entertainment, sports and leisure, the Brentwood Centre is a hub of activity for the town. Hosting music, antiques fairs, large sports events and other exhibitions there is always something going on here. There is a huge firework display here every November, and it is the home to the well-known Essex Dog Display Team and Training Centre.

Brentwood Theatre - built in the car park of the local youth facilities (The Hermit), this community theatre has been open since 1993. It gives access both to professional and non-professional performers and has a regular line-up of plays, activities, classes and workshops.

Most of the shops in the town are converted from private houses. The main High Street is on the Roman road, long and straight. At the beginning of the 1900s the shop-owners lived above the shops and were all independent. Today, the shops are mostly chain stores.

A 16-acre site where a private mansion once stood is now a designated 'special scientific interest' site and is leased to the Essex Naturalists Trust as a nature reserve.

A 400-acre Country Park, this area is also designated as a site of 'special scientific interest'. Originally designed by Capability Brown in the 17th Century, it includes ancient woodland, deer pastures, hay meadows and wildlife ponds. It also includes a golf course. The original Thorndon Hall was damaged by fire in 1878 and left derelict for a century. It is now a block of luxury flats.

A more recent acquisition, it has been owned by the local and county council only since the 1950s. The founder of Brentwood School had lived in Weald Hall, which was demolished after a fire during World War II. The park covers nearly 500 acres and is the biggest country park in Essex. Among other habitats it holds a lake, woodland and the remains of an Iron Age encampment. There was an ornamental deer park until 1945, when troops gathered there in preparation for D-Day. Vehicles breached the fences and the deer escaped. Fallow deer are now wild in the area, and a deer enclosure has recently been brought back to the park.

Although the possibility of getting anything other than basic general practitioner care in the town itself for the ordinary member of the public is extremely low at the time of writing, the town used to have thriving healthcare premises.

There was a cottage hospital with roots going back to the 19th Century in the town until 1930. After that it became a maternity hospital (where the author was born), and is now a family housing scheme. The District Hospital was moved less than a mile away, to land that was donated by a local philanthropist, with money raised by the local community. It had male and female wards, a children's ward, an operating theatre, and outpatient facilities. It operated on an outpatients-only basis for the last few years of its life and in 2005 the doors were closed permanently as the building was too old to be worth maintaining. There are plans to knock it down and rebuild a new medical centre on the grounds.

A large Victorian Gothic building, the hospital was opened in 1853 as the Essex County Lunatic Asylum and served the whole county - by 1858 it had 450 patients. In 1920 it became known as Brentwood Mental Hospital, and was renamed again in 1953, Warley Hospital. It was used as a long-stay psychiatric hospital, but in its later years most patients seemed to be ordinary people who had suffered breakdowns. It was closed in 2001, with the patients and staff moving to other areas.

Much of the area has now been redeveloped as a residential area with 300 homes, although some of the wonderful architecture of the original asylum still stands. It was built using red and black bricks, had stone mullion windows, and octagonal towers. In true Victorian Gothic style, it has a very medieval appearance.

Opened in 1921 as a tuberculosis sanatorium for young women, the Marillac was, and still is, run by the Daughters of Charity of St Vincent de Paul. By the 1950s modern drugs had virtually eradicated the disease, so the Daughters were asked by the NHS to take in chronically sick patients. It now specialises in patients with physical disabilities.

There are also two private hospitals in the town, the Essex Nuffield, and Bupa Hartswood.

Close to the M25, the A12 and the A127, there aren't many places that are difficult to get to by road from Brentwood. It is also served by the Liverpool Street to Norwich railway line.

As a Place to Live

Not a very exciting town, unless you really like going to the pub, Brentwood suffers from being a commuter town. During its entire existence it has been a place either to pass through or travel from. Not many people want to come to Brentwood itself.

..full of good inns, and chiefly maintained by the excessive multitude of carriers and passengers, which are constantly passing this way to London, with droves of cattle, provisions and manufactures.
- Daniel Defoe

The town is increasingly suburban, but it does have a very rural feel, with trees, fields and open spaces all around the town.

My husband at the time was one of the first workers to staff the new CCTV system. In full, glorious colour, you could zoom in on anything you wanted for a perfect view. The system produced photographs (there are more than a few of me and my son in photo albums, taken as we wandered around the High Street), an extremely good video that enabled criminals to be identified very easily, and the police station can be granted 'use' of any camera so that they can track people they believe to be involved in criminal activity themselves. The cameras have been used to trace lost children, mentally-ill patients, and in one classic faux pas, footage of a man wandering around with a knife was sold to a TV show as a 'criminal', when really he was suicidal.
- Author

1The Ongar to Tilbury road.2It had been decommissioned in 1994 and the land returned to the owners, but the news took a short while to 'leak out'.