Colchester, Essex, England, UK Content from the guide to life, the universe and everything 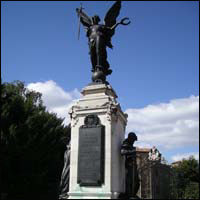 Colchester is a town of approximately 130,000 people in the county of Essex, approximately 60 miles east of London and 17 miles from the east coast. The town sits on the River Colne, is the second home of the British Army and is the seat of Essex University. It is also officially Great Britain's oldest recorded town; there has been a settlement on the site for at least 2000 years.

Colchester, or Camulodunum as it was back then, was the first Roman capital of Britain. Although Julius Caesar had taken the channel ferry over to southern Kent a few years previously, the first proper attempt at Roman settlement was under the Emperor Claudius in around 44AD. Having got rather lost on their trip over from Gaul, and having conveniently ignored the large and inviting Thames estuary, the Roman fleet sailed up the River Colne at Brightlingsea and decided to come ashore a few miles inland.

The first few years passed by rather uneventfully. Colchester was initially a trading settlement; a place where the local Celtic tribes could come to sell meat, skins and slaves, and buy such luxuries as weaponry, French wine and glassware. Within 15 or so years, the settlement had become a small town of around 30,000 people and in honour of this, the Emperor decided to have a temple to himself erected on top of the main hill in the area. The remains of this temple are still visible in the vaults under Colchester Castle. The town gained other amenities such as a city wall (much of which still exists) a bathhouse and an arena. In 60AD, the flourishing settlement was completely destroyed by the marauding Iceni, a Celtic tribe under Queen Boudicca whom the Romans had annoyed by stripping naked, whipping and raping her two daughters. This prompted the movement of the capital city to London where it remains today.

Colchester then slowly recovered over the next thousand or so years. Although there is very little archaeological evidence to support this, it is believed the Vikings did settle the area. This is reflected in certain place and street names which have their roots in the ancient Norse language.

In 1076 William the Conqueror ordered the construction of a stone castle on the site of the Temple of Claudius. This was the first stone castle built in the United Kingdom. Most of the building material for the castle came from the Roman ruins and, even today, original Roman bricks can still be seen within the castle's walls. By 1125, the castle was four storeys high and was the largest Norman castle ever built. The castle was besieged and eventually captured by King John in 1215 following his altercations with the rebellious nobles over the Magna Carta.

By 1350, Colchester's military importance had declined and the castle was mainly used as a prison. The infamous Witchfinder General, Matthew Hopkins, interrogated (tortured) hundreds of women within the prison in his relentless search for the agents of Satan. By 1600, the castle was falling down. It was sold by the crown, partly demolished, refurbished and eventually gifted to the town in 1920. Today, an excellent museum exists within the castle walls.

The town's importance grew in the late Tudor times with the growing trade in wool and weaving. Colchester also gained a reputation for producing oysters, though they were actually from the village of Brightlingsea a few miles down the river. This tradition continues today in the form of the annual Colchester Oyster Festival.

Today, the town is still an important garrison town and has a standing contingent of around 10,000 troops at any one time - the second largest in any one place after Aldershot. Recently, the Gurkhas1 left Colchester after having been stationed there for over 15 years. The Gurkhas, unusually for squaddies, were well-liked and well-respected due in no small part to their restraint and discipline preventing them from going out, getting drunk and starting fights.

As befits Britain's oldest recorded town there are many items of historical note to be seen within Colchester. Colchester Castle, set within the Castle Park at the bottom of the High Street, houses an excellent museum of Roman and medieval history. There are also tours into the vaults of the Castle, which date back to Roman times. The Castle Park also contains a large well-preserved section of the original Roman city wall.

The Balkerne Gate, found at the top of Balkerne Hill, is the only complete Roman archway left in Britain. It was originally one of the four main gates into the town and is now (obviously) the only one left. The Roman wall extends along most of the length of Balkerne Hill. A few yards from Balkerne Gate is the excellent Mercury Theatre and 'Jumbo', a very tall Victorian water-tower which, bizarrely, is now a church.

St Botolph's Priory, located just off the bottom of Queen Street, is the ruins of a 900-year-old monastery, destroyed by Henry VIII during the reformation.

The Dutch quarter, found behind the town hall off the High Street, is a maze of tiny streets containing many original Tudor houses. The area is named after the influx of Flemish weavers who came to the town in the 16th Century, most of whom congregated there. Local folklore has it that the words to 'Twinkle twinkle little star' were written by a lady who lived within that section.

To the north of Colchester is the very picturesque 'Constable Country', an area named after the artist John Constable. The villages of Dedham and Flatford offer a range of 'olde worlde' craft and antique shops and numerous places to eat cream teas. Constable's most famous painting, The Haywain, is actually of Flatford Mill, which has now been turned into a craft shop.

The town has a large number of pubs and clubs, most of which change name regularly to confuse visitors. The Playhouse on St Johns is an old converted cinema and offers cheap drinks, cheap food and a generally cheap atmosphere. The Marquis of Granby at the foot of North Hill generally attracts a young crowd, and the Robin Hood is renowned for clashes between army regiments. If you stick around in the Robin Hood long enough, ask about the former landlord and his talent with a shotgun.

The Bull's Head is a particular favourite, where a decent pint was always available, as is the Goat and Boot at the bottom of East Hill - good beer, good food, a pool table without resident sharks and a pet parrot who doesn't bite. The Peldon Rose, about ten miles out of Colchester on the Mersea Road serves excellent food in very peaceful and picturesque surroundings. Just watch your head on the door on the way in.

Colchester has a football team, Colchester United FC. After a period languishing in the Vauxhall Conference, they now are enjoying the relative dizzy heights of Division 2. That said, attendance at the Layer Road ground (an appalling heap barely worthy of the name 'stadium') doesn't creep much over 4000 on an average weekend.

A quarter-mile or so from Balkerne Gate is the Art Centre; formerly the Church of St Mary and now a venue for live bands, comedians and a place for teenagers to get drunk in.

The most notable club in the town is the Hippodrome, just down from the town hall on the High Street. On a typical weekend night, the average age of the clientele is rather young and the music is a typical mix of whatever dross has crawled into that week's top 40. A large selection of Essex girls and boys can be found here, if that's what tickles your fancy. If you prefer Indie music, the Charles Dickens on Barrack Street regularly hosts up-and-coming bands, most of whom can play their own instruments. Colchester bands are, for the most part, devoid of talent. The local music scene 'peaked' with the Stanway High School band Blur. Yes, that one. Even Damon Albarn has nothing nice to say about his former educational establishment or the town it's in.

If you prefer to spend your weekend evenings sober, then another regular pastime is taking part in an 'evening cruise'. To the uninitiated, this involves haring round and round the town centre in a clapped-out bestickered Ford Escort or Vauxhall Nova, the girlfriend in the passenger seat and three mates in the back. Music should be of the boom-boom-tizz variety and should be set at a volume sufficient to cause deafness within a few hours and to render conversation impossible. Occasionally, you should break off your circuits of the town and drive into St Botolph Station car park, where you must perform inexpert handbrake turns and then sit in your car with the windows down shouting at other the like-minded people congregated there.

There are also the usual staple recreational facilities - a swimming pool with wave pool, flumes, a couple of bowling alleys and for more sedate children, a boating pond in the Castle Park.

Colchester is in the London commuter belt and is served by the A12 dual carriageway that leads to London in one direction and Ipswich and the ports of Felixstowe and Harwich in the other. The A12 is renowned for hosting a never-ending series of roadworks restricting the only major traffic artery to the east coast down to one lane, slapping a 30mph limit on the road in places. The local constabulary always like to join the party and install numerous speed cameras to enforce the ridiculously low speed limit.

Also serving the town is the main east coast railway line. Trains run from Liverpool Street station in London at very regular intervals and almost every train stops in Colchester. Colchester's North Station, up until very recently, possessed the longest railway platform in the world - a result of having to load enormous troop trains during the First and Second World Wars.

1The Gurkhas are members of a regiment in the British army specifically for Nepalese recruits.