The North Staffordshire Oatcake Content from the guide to life, the universe and everything 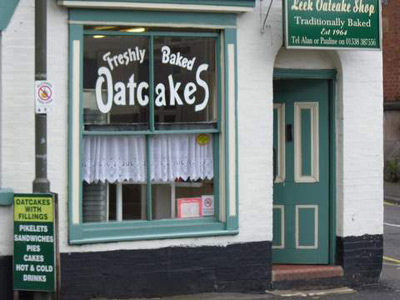 This Entry was updated in September 2011.

The Staffordshire (or more strictly North Staffordshire) oatcake is virtually unknown outside a small area of the North Midlands of England.

Some say it is in the city of Stoke-on-Trent alone that you can find the genuine article, although they are regularly found in Newcastle-under-Lyme, and have been recorded as far north as Crewe, and as far southeast as Uttoxeter. Outside of these areas, it is rare indeed to find a proper example, although due to the proselytising zeal of Potters1, they are widely known about. (And non-Potters are generally suspicious of them.)

To those in the know, it is the food of the gods. There are no better breakfast portable eats, and they are equally at home as a late night treat, although it is thought they originally evolved as a finger food that would go in your pocket for snappin2 on the way to work in the mines, steelworks or potbanks3.

So strongly associated are they with Stoke-on-Trent that they must surely have originated there, though their origins may be lost in time. They were certainly widely available in the area in the 1930s, and possibly before, as literary and historical records exist4.

One theory is that they are the result of ex-soldiers from the North Staffordshire regiment trying to replicate the flat breads they had encountered whilst on service in the tropics. (Hence the nicknames of 'Potteries Poppadom' and 'Tunstall Tortilla'5 - although no local would say such daft things.) However they most probably evolved, as most good food does, from poor people trying to make good with what little they had. 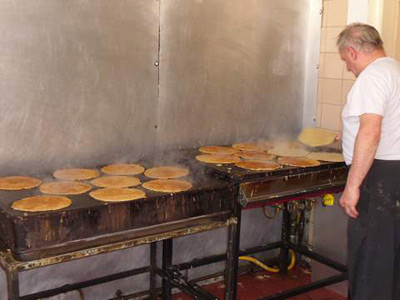 The Staffordshire oatcake is not related in any way to the Scottish oatcake, a dry, biscuit-like affair.

Staffordshire oatcakes are about nine inches (25cm) in diameter and a little thicker than a pancake. They are cooked discs of a batter made from oat flour6 in a similar way that a crepe or a pancake is from wheat flour.

These are cooked, in dozens at a time, on a large flat sheet of metal heated by burning jets of gas. This sight is common all over the region, and at one time each town or village would have its favoured shop or stand, just as it would its pub and chippy. These shops, often no more than a grease-stained, one-room establishment, are still frequently to be found all over the area. In mid-morning, you will find queues of Potters, Staffordshire Moorlanders, and other devotees outside these shops waiting for their fix.

An oatcake can be eaten plain – and in the past, a dab of dripping was considered enough – but can be filled with anything savoury (or sweet if you really must) for a nourishing and filling snack or small meal. They are traditionally rolled or folded into quarters around the filling.

They are actually quite healthy in and of themselves, being mainly made of finely-milled oat flour, but the preferred fillings can normally clog your arteries at a glance.

Oatcake shops will sell you a filled oatcake for around £1 and a plain oatcake for you to refill and heat at home7 for about 30 pence. Considering the prices commanded by some other regional delicacies (foie gras, anyone?), they are one of the culinary world's most underrated and excellent delicacies.

If you really want to cause an argument amongst Potters, ask about their preferred oatcake fillings. Be prepared to be there some time, particularly with ex-pats in foreign parts8, among whom the craving has grown. Probably the most common filling is bacon and cheese, followed by other breakfast foods, such as beans, tomatoes, etc. (Jam if you must. But if you really want something sweet try a North Staffordshire pikelet9.)

At a recent concert at Wembley, Stoke-on-Trent's most famous son, Robbie Williams, stopped the gig on seeing some fellow Potters in the audience to ask them if they had any oatcakes. The rest of Take That's reaction is not recorded.

How to Make Oatcakes at Home

This is best left to the experts, but if you are outside the 'Oatcake Triangle', try this recipe which makes around 12 oatcakes:

Add the salt to the flour and oatmeal.

Dissolve the yeast with a little of the warm liquid and add the sugar. Add the rest of the liquid and allow the mixture to become frothy.

Mix the dry ingredients with the yeast liquid to make a batter.

Cover the batter with a clean cloth and leave it in a warm place for an hour.

Bake the oatcake on a well-greased flat griddle or heavy frying pan, over a medium to high heat. Put enough batter onto the griddle to produce an oatcake about 8-9 inches (20-25cm) in diameter. The surface will be covered in holes as it cooks. Turn the oatcake after 2 - 3 minutes when the upper side appears dry and the underneath is golden brown, and cook for another 2 - 3 minutes.

At this stage, you can add the filling on top of the cooking oatcake and allow to melt or warm through. Or alternatively remove your oatcake; allow it to cool, and reheat later with the filling of your choice.

1Due to the traditional local industry, the area around Stoke-on-Trent is known as The Potteries, and its residents as Potters.2Snappin is Potteries dialect for food commonly taken to work.3The local term for a pottery factory, where the pottery is fired in 'bottle ovens' (distinctively shaped kilns).4In the works of Arnold Bennett and in the archives of the Potteries Museum.5The town of Tunstall is part of the city of Stoke-on-Trent.6To a once 'secret' recipe, now widely available, but which never seems to work at home.7You may heat them in a frying pan, with bacon and eggs. You may (controversially) simply place them in a microwave with a filling of cheese, taking care not to over-cook. Grilling is also an easy way to reheat them and gives a nice, slightly crispy edge.8Like London.9Pikelets are smaller than oatcakes, and made solely of wheat flour, risen with batter and cooked on the griddle in the same way as oatcakes. They often have sultanas or raisins added to sweeten them.