Lisburn, County Antrim Content from the guide to life, the universe and everything 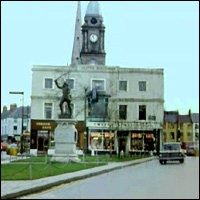 Lisburn is one of the UK's newest cities, having been created in 20021 to celebrate the Golden Jubilee of Queen Elizabeth II. As a town, it dates back to 16th Century, but it really expanded in the 17th Century, aided by the linen industry that the French Huguenots helped to establish - Lisburn's linen was world famous.

The city's motto is 'Ex Igne Resurgam' - 'I will arise out of the fire' - referring to an accidental blaze that destroyed most of the city in 1707. The Irish name is Lios na gCearbhach, meaning 'The fort of the gamesters'. It is thought to refer to local spots where gamblers met secretly for card games. The anglicised version is Lisnagarvey, which is still used by local groups such as schools, sporting clubs and the operatic society.

Lisburn lies approximately ten miles south-west of Belfast. This makes it a very popular place to live2 among the working populace of the greater Belfast area. It is well-connected, with road links via the M13 motorway, rail links (Lisburn station opened in 1839 and is on the main Belfast-Dublin train line) and bus routes.

In bygone days a canal was constructed to connect Lough Neagh with the sea at Belfast Lough, and this canal travelled through Lisburn. In 1763, the first barges carrying coal and timber travelled along the canal, but it ceased commercial operation in 1958. Today, the canal towpath is part of a cycle path, and it is possible to cycle the 15 miles4 from Lisburn to Belfast city centre. The River Lagan flows through the city and divides it into its main part in County Antrim and a smaller bit in County Down.

Lisburn was the birth place of John Ballance, who was once prime minister of New Zealand (1891 - 1893). Among his many notable achievements was giving women the vote, in 1893 - making New Zealand the first country to do so.

Sir Richard Wallace gave the world the famous Wallace art collection, and donated two fountains to the city. In 1870, when he was living in Paris, the city was under siege and water was both hard to come by and expensive. Wallace donated 50 fountains to the city, providing free water to the poor to prevent them from turning to alcohol. Many of these fountains are still in existence, and are known to locals as 'Les Wallaces'. Other Wallace fountains can be found in Rotterdam, Canada, Brazil and Mozambique. One of the grammar schools in Lisburn is also named after him, as is the main park in the city.

Harry Ferguson, of tractor fame, is from Lisburn. More contemporary famous sons include Jonny Stevenson, runner-up in the 2008 Masterchef competition.

Lagan Valley is Ireland's only regional park, and it contains a 10-mile stretch of the towpath (now the cycle path) by the River Lagan. It also contains the Giants Ring - an ancient Stone Age earthworks, 200m in diameter with five entrances, dating back to 6,000 BC.

The village of Lambeg is really a suburb of Lisburn, and gave its name to the large drums much associated with Orange marching bands. These drums are almost certainly derived from the large side drums carried by the Dutch troops of King William III. They are played vertically, allowing both heads to be struck with thin, flexible canes (Malacca canes). Such drums are normally made from wood, with goatskin for the heads. They are the loudest folk instrument on the planet.

It is said that King William stopped in Lambeg to ask for directions from a blacksmith. The blacksmith, Rene Bulmer, heard the king's French accent and replied in fluent French, as he was one of those fleeing Huguenots.

Another suburb, the village of Hilden, houses the oldest independent brewery in Ireland. It is possible to visit the brewery, taste the produce and dine in the Tap Room restaurant.

The pretty village of Hillsborough three miles away holds a fine patch of ancient woodland stretching to almost 500 acres and incorporating a lake, which is a wildlife sanctuary, in its forest park. Hillsborough is also gastropub heaven: The Marquis of Downshire, the Tidy Doffer, the Plough, and The Pheasant are all good places to eat and drink. In the first week of September, Hillsborough hosts an oyster festival.

The castle at Hillsborough is the official residence of the secretary of state for Northern Ireland, as well as being home to visiting members of the Royal Family. It has seen many distinguished visitors, including US presidents, and been the site of many historic meetings marking the steps along Northern Ireland's fragile political process.

On the western edge of Lisburn is the Maze prison5, site of dirty protests and hunger strikes during 'The Troubles'. The infamous H-blocks here were so called because of their shape as seen from above. During these hunger strikes, Republican prisoners sought political status, and went to extremes to try to achieve this. One of the hunger strikers, Bobby Sands, was elected as an MP for Fermanagh-South Tyrone in 1981. He became the first of the hunger strikers to die, later that year.

The prison saw a number of audacious escapes and attempted escapes. In 1983 the largest ever breakout from a British prison occurred when 38 prisoners escaped in a hijacked meal truck. A tunnel was discovered in 19976, foiling another escape attempt. But one prisoner did manage to escape during a Christmas party that year, by dressing as a woman.

The future of the site of the now razed prison is still being debated. It is likely to be turned into a sports stadium, although controversy surrounds any perceived glorification of its past.

The Maze is also home to Down Royal racecourse.

The French Huguenots who came to Lisburn fleeing religious persecution brought the art of linen making with them. The Barbour family established a bleach green7 and threadworks in 1812. At one stage it was the largest thread works in the world, and the name Barbour is still associated with sewing and thread. The local derogatory term for young working class girls in and around Belfast is 'Millie', from the days when many of these young women would have worked at the linen mills.

The history of the local linen industry is recorded in the modern Linen Centre and museum at the heart of the town. The impact of the industry can be seen in the surviving street names, such as Mercer8 Street.

The Island Arts Centre is a modern building situated on the river beside Union Bridge. It regularly hosts arts and drama courses and performances, as well as housing the local council offices. The Omniplex and Leisure Centre is a ten-screen cinema and sports facility, containing a swimming pool, gym, water park, and a wide variety of other sporting activities, set within a complex containing many eating places. The recently refurbished Castle Gardens are a set of tiered and walled Victorian gardens with some splendid views of the surrounding countryside.

Lisburn is a popular shopping town. The large out-of-town centre at Sprucefield is easy to get to, as it is situated at a big junction of the M19 which marks the turn-off for Dublin. The radio mast at Sprucefield is a well known landmark for motorists.

Lisburn city itself has a disappointing lack of good pubs10 and restaurants, and is often derided as being the only city without a hotel.

1Along with Newry - as with most things in Northern Ireland, you have to have a Protestant one and a Catholic one. Lisburn is the Protestant one.2The population was 71,000 in the most recent census, and average house prices are among the highest in Northern Ireland.3Northern Ireland has its own very small network of motorways, not to be confused with similarly-named motorways in the rest of the UK or Republic of Ireland. 4The journey beside the river is longer than by road, as the section which follows the river has many twists and turns. 5Formerly known as Long Kesh.6Prior to the discovery of the tunnel, many Republican prisoners complained of a bad back and were given wooden boards for their beds. These boards were used as props inside the tunnel. Nobody thought to investigate the strange rise in the number of inmates with bad backs.7Linen is made from flax, and is a pale beige colour when it is woven. Before the days of chemical bleaching agents, the cloth was laid out in the sun to be bleached. The large area used for this was called a bleach green.8A mercer was a fabric dealer.9Junction 7.10Although many of the pubs are good if you fancy watching or taking part in a fight on a Friday night.