The Hawthorn Content from the guide to life, the universe and everything 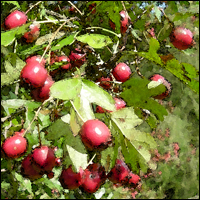 And every shepherd tells his tale
Under the hawthorn in the dale.
- from 'L'Allegro', by John Milton.

Even when divested of its leaves and fruit, the hawthorn is one of Britain's most easily-identifiable trees. The clue is in the name; the short shoots of last year's growth are stiff and sharp, and anything up to an inch in length. At this time of year, it is less easy to tell the two British natives apart; the common hawthorn Crataegus monogyna1 and the less-common woodland or Midland variety Crataegus laevigata can be told apart by leaf and fruit alone. Hybridisation is common, and pure woodland hawthorns are a rare sight, so we will largely treat them as one and the same here.

Start to look around the countryside, and you'll see that the hawthorn is astonishingly ubiquitous. It has long been a staple of hedgerows, and in abundance forms a powerful barrier to livestock. It was not until the invention of barbed wire that a better field barrier could be imagined, and in some parts of the country it is still known as 'hedgethorn'. The trunk was cut two-thirds of the way through at the base and lashed close to the ground to fill gaps, a procedure known as 'plashing', and the resulting spiky jumble proved impenetrable. And not just to animals; it was the favoured barrier of landlords back in the days when if you enclosed a piece of land, it was yours. Not only that, but in the winter hawthorn was one of the most sought-after firewoods. It burns slow and hot and, as the old rhyme says:

Hawthorn bakes the sweetest bread
So it is in Ireland said.

In fact, hawthorn is everywhere. If a tree is mentioned in a placename, there is an 18% chance it will be a hawthorn. Not only that, but if a feature is named after a tree, there is almost a 40% chance it will be a hawthorn. West Bromwich Albion's football ground is even known as 'The Hawthorns'2. This is perhaps not surprising, given the tree's fairly obvious appearance, but the common hawthorn's preference for growing on open country also plays a part. Moreover, it grows very quickly, and another old name for it is 'quickthorn'. Its windblown appearance on lonely moors is a surprisingly welcome winter sight.

The hawthorn has a surprise for us in winter, too. The Glastonbury thorn Crataegus monogyna 'Biflora', supposedly brought to Britain by none other than Joseph of Arimathea, still flowers every Christmas as well as in May. It is interesting to note that when Britain adopted the Gregorian calendar in 1752, and thereby shifted the date 11 days forward, crowds gathered to see if the trees would obey the change of dates. Indeed, it was noted by J Pickburn in an 1858 book of Buckinghamshire's archaeological records that:

On Christmas Eve, 1753, at Juainton [now Quainton], in Buckinghamshire, above two thousand people went with lanterns and candles, to view a blackthorn3 in that neighbourhood, which was remembered to be a slip from the famous Glastonbury thorn, and reported always to have budded on the 24th to have been full blown the next day, and to have gone off at night. The people finding no appearance of a bud, it was agreed by all, that December 25 (new style) could not be the right Christmas-day, and accordingly refused going to Church...

The risen cream of all the milkiness of May-time.
- HE Bates.

Ah, hawthorn blossom. It is undeniable that it is one of the great sights of a British spring. The off-white flowers, often with a hint of pink, shroud the trees, and where hedgethorn dominates, the sight is often spectacular. Traditionally, the hawthorn flowers on May Day, but there is considerable local variation, and at altitudes of just a few hundred metres they may not bloom until July. Whenever you see them, you may think that the pretty little flowers of the 'May-tree' would be nice to pick and take home. Think again.

In many parts of Britain, taking hawthorn flowers into the home is thought bad luck, or may even bring death on a member of your family - probably your mum, in fact. In Welsh, the tree is known as Blodau marw mam  ('Flowers-death-mother'). It may be wise to avoid scolding your children until the blooms have fallen. The reason for this is generally held to be the blossom's odd odour. In short, it smells of sweet, sexy death.

It is not an unattractive smell, in fact - a little bit of honey and a dash of almond. However, it also contains triethylamine, a chemical produced in the early stages of decomposition of plants and animals, as well as in vaginal infections. This rather fishy element could conceivably have given rise to the superstitions surrounding the blossom, although no-one is entirely sure. It is also probable that it was the reason for the tree being at the centre of spring fertility rites.

Of course, the smell of putrefying corpses has its benefits. Little in nature happens by chance. Hawthorn flowers are 'perfect' - having both male and female sexual organs - and the smell attracts flies, which pollinate the tree. It is presumably a small price to pay for not being welcomed into human homes.

The hawthorn-brush, with seats beneath the shade
For talking age and whispering lovers made!
- Oliver Goldsmith, The Deserted Village

In leaf, the hawthorn is at its most anonymous. It becomes just another part of a green hedgerow, and alone in the landscape loses much of its starkness. Away from aesthetics, however, it becomes very important indeed.

It provides food and shelter for over 150 different species of insects, and a few, such as the hawthorn shield bug, are dependent upon it. These provide an easy food source for many birds, which are all too happy to nest among the thorns and spikes, safe from predators. The growth of intensive farming removed many of these sanctuaries, and it is only recently that the importance of traditional boundary hedges has been realised. It seems obvious now that to take the hawthorn also removes the wildlife, but the needs of a hungry post-war population necessarily came first. The welfare of Britain's wildlife is closely linked with our prosperity.

It is now that we are able to begin to see the difference between the common and the woodland hawthorns. There were differences in the spring as well, of course, but you'd have to peer very closely to see. The common hawthorn has just one stamen; the woodland two. Now we can look at the leaves. Both have leaves a couple of inches or so in length and are roughly oval. The difference is in the lobes. The leaf of the hawthorn is divided into lobes by clefts, rather like your fingers are separated from each other but still form part of the whole hand. The common hawthorn's leaves are cleaved about two-thirds of the way to the midrib, whereas the woodland has much shallower clefts.

As the summer wears on, the trees become venerated by us, too. During the English Civil War, Charles II hid inside an oak tree to escape his would-be captors at Boscobel, and shortly afterwards declared that the day of the escape, 29 May, should be celebrated as a public holiday. Oak Apple Day caught the public's imagination, and similar rituals began to be associated with the hawthorn on Old Midsummer's Day, 5 July. Trees would be decorated with flags and ribbons and danced around, with supposed descendants of the Glastonbury thorn the centre of attention. 'Bawming the Thorn' still takes place every year at Appleton in Cheshire.

The hawthorn-trees blow in the dew of the morning.
- Robert Burns.

Now, at last, the hawthorn is at its best. Those curious-smelling flowers have at last been replaced by huge bunches of blood-red berries. We have waited all year for this magnificent sight. We do not look at the landscape and see it swathed in red, but if we look for individuals and clumps of hawthorns we may well be astonished at the bounty. Many birds are grateful for it, too, most notably the thrush family; watch carefully and you may catch sight of a fieldfare, hawfinch or redwing coming to feed. They are also a favoured food of the declining yellowhammer, which has always been closely linked to human agricultural activities. As autumn draws on, dwindling food resources become even more important, and fortunately the haws hang around well into the first frosts.

It is not just wildlife that appreciates the food provided by the hawthorn. Haws have never been a staple of our diet, but look through very old recipe books and you may find references to cooking with both leaf and berry. They were sometimes made into jelly or used in wine making. In fact, the haws are fairly palatable (if rather less than a culinary delight) with a rich, over-ripe flavour, and the leaves taste rather like stale bread. The two were occasionally eaten together by children, who called them, rather fancifully, 'bread and cheese'.

Autumn is almost over. The leaves are dispensed with; the berries devoured. The hawthorn retreats into inactivity, but its purpose is not yet served. Slow-worms and mice seek out cosy hollows in old hawthorns to hibernate inside. Peacock and brimstone butterflies may already have begun their winter's sleep. Even when the life cycles of the country are taking their annual pause, the hawthorn is still serving its purpose.

1The word Cretaegus comes from the Greek word meaning 'strength', as in the strength of the wood. The smooth grain of the very hard wood makes it very suitable for engraving work.2The local stands of hawthorns were noted for their thrushes, and the bird was adapted into the club's crest.3It is presumed that the author was not a botanist - blackthorns do not bloom at Christmas.