How To Make Juice Wines Content from the guide to life, the universe and everything 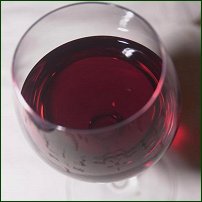 God made only water, but man made wine.
- Victor Hugo.

Making wine at home can, to the beginner, seem bewildering and complicated. First, there's so much odd equipment to buy it can feel like you're putting together a research lab; then you need somewhere to put it all where the fermenting wine won't stink the whole house out. You then need patience during the months of waiting for it to mature. Winemaking has become the hobby of the dedicated enthusiast who is prepared to put time and effort into endlessly squeezing mush through muslin and adding odd substances to the pot.

The enthusiasts won't tell you that making decent wine is very easy, requires little outlay or equipment and can produce very satisfying results in a matter of weeks. Armed with nothing more than a couple of demijohns (glass containers that usually hold a gallon, or about five litres, of liquid) and a length of tubing, anyone can brew decent wine. Forget the stinking, fermenting must and months spent maturing; this is quick and easy wine on the cheap.

Most homebrewers get a large, glorified bucket and squash grapes and other ingredients such as fruits, flowers or grain in the bottom to make a big, squelchy mess called a must. They add yeast, sugar and water and, when fermentation is underway, they filter out the solids and transfer the liquid into demijohns to bubble away. They may also add citric acid and tannin to the mix to boost the flavour, but this means the wine will take much more time before it's ready to drink. After several months, sometimes even a year or two, the wine is transferred to bottles to mature further before it is ready to drink. This is how to make wine properly.

The advent of fruit juice in cartons made some people wonder if there wasn't a much easier way. Why bother with the whole process of making and filtering the must when it's already there, sitting on the supermarket shelf? Of course, this idea was frowned upon by the purists, and it doesn't appear in many homebrewing books - and if it does, it is almost sneeringly referred to as a 'cheat' wine. It is difficult to understand why, as juice wines can be remarkably good. Perhaps the fact that any Average Joe can make it is what really offends the enthusiasts.

Forget the heating timers and muslin. All you're going to need is:

How To Cheat At Wine

Soak one of your demijohns in weak bleach overnight before you start, and make sure you rinse it well. Bacteria can cause the wine to turn to vinegar, so you'll want to make sure you've got rid of them, but the bleach will also kill the yeast! Pour in two litres of your fruit juice, which should be at room temperature, add the yeast packet and plug the top with the airlock - remembering to half-fill it with water first. Go and have a nice cup of tea, then give it a swirl and leave it to start to ferment.

Within a few hours, you'll start to see bubbles rising through the juice. The yeast is feeding off the sugar in the juice, giving out two waste products: carbon dioxide, which is bubbling out; and alcohol, which is what we want. Within a day or two, you'll see thick bubbles forming on the surface of the juice, rising up the inside of the demijohn. This is why we have only half-filled the container; if we had filled it, the liquid would escape through the airlock and all over the floor. You'll also see a layer of sediment starting to form on the bottom of the demijohn, and hear bubbles of gas escaping through the airlock.

After a few days, the thick bubbles will subside, so you can add another litre of juice to the mix. You'll get thick bubbles forming again, but in lesser quantities; when these subside, add the final carton. When this lot of bubbles have subsided add a litre of water to top the demijohn up, then leave it somewhere it won't be disturbed on a work surface, table or shelf a few feet off the ground.

After a few weeks, the bubbling will slow and stop, and your wine will be fully fermented. Most of the sediment will have fallen to the bottom, but your wine will still be a little cloudy, so to help it clear more quickly we're going to transfer it to the other demijohn. Having sanitised this one in the same way, put it on the floor below your fermented wine. Take the tube and sediment trap, place the trap into the wine about halfway down the demijohn, and suck on the other end of the tube; just before the wine gets to your mouth, put your thumb over the end, move it into the neck of the second demijohn and remove your thumb. The magic of gravity will siphon the wine; now simply move the sediment trap deeper into the wine until you've sucked out the layer just above the spent yeast. If you've done this first time without making a mess - congratulations!

You can now fix the airlock on the second demijohn and, again, leave it off the ground somewhere it won't be disturbed.

After another week or two the wine will be crystal clear, the sediment having settled on the bottom, so it's time to bottle it. You do this by siphoning it in exactly the same way that you did before, but filling your wine bottles instead of the demijohn. Screw the caps on and - tada! - you've made wine!

It's best to leave it in the bottle for a week or so before drinking it to let the last particles of sediment settle. If you have a significant amount it might be worth decanting the wine into a glass jug before serving so that it doesn't end up in the wine glass. Juice wine won't last an awfully long time and is usually best drunk within six months.

You can use just about any juice that comes in a carton to make wine. However, it's important to use at least 50% grape or apple juice, as these fruits will give your wine a nice full flavour. Purists would argue that it isn't wine without grapes, but the British have often substituted apples for grapes in winemaking - and the purists will still be maturing their wines long after we've polished ours off. Be careful not to use cartons marked 'drink' as opposed to 'juice', as these are mostly water and won't contain much sugar or flavour. Juices made from concentrate are absolutely fine, and often much cheaper than 'squeezed' juice.

Some of the best combinations include:

In general, the better the juice you use, the better the wine will be. Cloudy or pulpy juices make great wine, though they create more sediment as the bits of fruit drop to the bottom. If you're on a budget, it's well worth prowling supermarkets before closing time to buy juices that are just about to go past their sell-by date.

Juice wines are a wonderfully simple way to brew wines at home with little fuss, and make great presents too. You don't need time, money or space to make them - just don't go entering them in any wine club competitions...