George Best - The Footballer Content from the guide to life, the universe and everything 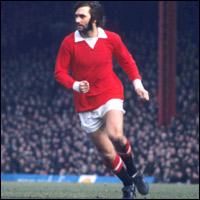 George Best was one of the most famous football players the UK has ever seen. His glory years were spent with Manchester United, where he played between May 1963 and January 1974. He played 465 games, and scored 180 goals for the team in this time. He made 361 league appearances and scored 136 league goals for the team. He played for Northern Ireland, and after leaving Man U, he played for several other smaller clubs. Best was hailed as a footballing genius and was one of the first sporting icons.

Pelé called me the greatest footballer in the world. That is the ultimate salute to my life.
- George Best

In the IFFHS1 'European Player of the Century' election in 1999, Best was voted 11th place, just behind Marco van Basten. The 'World Player of the Century' election saw Best voted into 16th place, behind Lothar Matthäus. In his 2004 FIFA 100 list, Pelé ranked Best as among the top 125 footballers, and has also said that Best was the best player he saw play. Many would rank Best as the 'best' player in the UK, rivalled only by Pelé and Maradona in a global context. He is reported to be Maradona's favourite player of all time. The UEFA Golden Jubilee Poll named Best in 19th position, just behind Gerd Müller.

Best was known for his accurate passing and dribbling skills. He usually played as a winger, and had an unusual ability to single-handedly (or footedly) evade the opposition's entire defences to score a goal. His talent and ability are rarely seen in the game.

When I'm gone people will forget all the rubbish and all that will be remembered will be the football. That'll do for me.
- George Best

Best was discovered by Man United's Belfast scout, Bob Bishop, in 1961, when he was just 15. Bishop sent a telegram to Man U manager Matt Busby that simply read, 'I've found you a genius.' Busby took him to Manchester, where Best then worked as an office boy for the Manchester Ship Canal Company near Old Trafford, as they were not able to sign him until he turned 17.

Once Best turned 17, he was signed by Joe Armstrong, the head scout, and played his first match for Man U against West Bromwich Albion. After the match, Welsh opponent Graham Williams shook Best's hand and said:

Stand still son so I can have a look at your face. I've been looking at your backside all day disappearing up the touchline.

Best quickly became homesick after arriving in Manchester. Only the day after he arrived, he and another young Northern Irish player, Eric McMordie, returned to Belfast. Busby spoke with Best's father on the telephone which resulted in Best returning to Manchester within a fortnight. However, this was not the end of his homesickness.

Best returned to Belfast to spend Christmas 1963 with his family. Man U contacted him during the holiday to ask him to play in their up-coming Saturday home game against Burnley. Burnley had beaten Man U on Boxing Day. Despite being the new guy and only having played one professional match, Best agreed to play, only if the club flew him back to Belfast straight after the match. He proved himself in the match, and scored his first goal, helping Man U to win.

Best played in the squad that won the Football League Championship in 1965, defeating Leeds United, and won again in 1967. In 1966, he hit the internationals playing against Benfica in Portugal. He scored two goals in the first ten minutes. The final score was 5-1 in favour of Man U.

Best played his finest football with Man U. Following the retirement of Matt Busby, he became increasingly wayward, and Busby's successors were unable to keep him in line. Man U were soon loosing to teams they had once easily defeated, and Best began to lose his passion for the game. His drinking increased, appearances at training declined, and matches suffered.

However, there were still bright moments. In 1970, he returned from a period of suspension to play against Northampton Town. He scored six goals against the opposition. The final score was 8-2.

In 1971, he missed the train to a match at Chelsea. He was suspended for a fortnight as a result. In 1972, he failed to make training sessions and was dropped from the team. He was also required to leave his house in Cheshire and stay in lodgings near the grounds. Best was dropped by the team in 1974 as a result of his heavy drinking and his failing to make training sessions and matches. He was then 27.

Best's debut for Northern Ireland took place in 1963, when he was 16 and playing for their under-18s team. His first full international game took place only a few days before his seventeenth birthday, when he played against England. Norman Kerrigan was the manager at this time. After seeing Best's thin frame and long hair, he said, "He's like something I'd clean my mouthpiece with."

Best played 37 games for the NI team in 13 years, scoring nine goals in this time. He won a massive 37 international caps for Northern Ireland between 1964 and 1977. He won the first of these caps when he was 18 and was hailed as the next Stanley Matthews.

Best had incredible crowd appeal. In 1967, he defeated opponents Scotland almost single-handedly at Windsor Park, Belfast. Malcolm Brodie, an award-winning sports journalist who attended the match, wrote afterwards that Best had given "the finest individual performance by any player to grace Windsor Park." The day is remembered as 'The George Best International'.

After leaving Man U, Best played for 11 other smaller clubs, including Dunstable Town in 1974, Stockport County, Los Angeles Aztecs and Cork Celtic in 1975; Fulham in 1976, Fort Lauderdale Strikers in 1978, Hibernian in 1979, San Jose Earthquakes in 1980, and Bournemouth in 1983. He retired from professional football in 1983, aged 37, though continued to play in various charity and friendly matches.

When he played his debut match for Hibernian in 1979, over 20,000 fans came to watch. The club usually had barely 8,000 fans in attendance. During one match against the Rangers, he was getting some abuse from visiting fans. Best appeared to drink from a beer can that had been thrown onto the pitch. This was enough to not only stop the abuse, but to reduce both sets of fans to laughter.

His last match for Hibernian was against Falkirk, with Hibernian winning two goals to nil. After leaving Hibernian, he returned to the USA to play for the San Jose Earthquakes.

Best desired to get back into football after he retired, and in November 2004, he agreed to be a youth coach for FA Premier League club Portsmouth FC. He died on 25 November, 2005.