Wandering Noon Content from the guide to life, the universe and everything 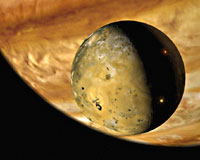 If you always thought that noon came at the middle of the day, think again. In fact, the timing of sunrise and sunset can vary independently, causing noon to wander about the day by as much as 16 minutes. An explanation of why this happens requires knowledge of a good deal of space and elemental astronomy.

The apparent motion of the sun across the sky is composed of three simple elements, which, when combined, make things a bit complex. A basic understanding of all these motions is important to have an understanding of the more complicated astronomical phenomena.

It is best to start at the beginning. The apparent 'rise and set' of the sun are due to the Earth's constant rotation1, which causes the sun to appear to rotate constantly around one's location. Although you might think the Earth rotates once every 24 hours, in fact it rotates only once every 23 hours and 56 minutes.

The other four minutes are due to the fact that the Earth is in a slightly different position in its orbit around the sun each day. This results in it being at a slightly different angle to the sun and requires an average of four minutes2 to correct. This four-minute figure is only an average however, because the Earth's orbit is not circular but is in the shape of an ellipse with the sun at one of the foci. In other words, at some points in its orbit the Earth is closer to the sun (winter in the northern hemisphere) and at some points it is farther away. The Earth goes faster around the sun when it is closer to it, so the sun appears to go faster in the sky when the Earth is closest to the end of the ellipse. This happens in late December.

In addition to not being circular, the Earth's orbit is not at right angles to the Earth's axis. The Earth's axis is tilted with respect to its orbit around the sun3. The effect is that the angle of the sun toward the Earth varies over the course of the year, causing the sun to appear more in the sky in summer than winter. This affects the hours of daylight in a day, the apparent height of the sun at noon and the apparent course of the sun from rise to set. It is this variation that causes the seasons as the sun shines more on either the northern or southern hemisphere4. The day on which the sun is exactly over the equator is called the equinox (vernal or autumnal) and when is it at its farthest tilt it is called the solstice (summer or winter).

Because of the combination of the ecliptic and the Earth's elliptical orbit, the sun's midday position appears to move about the sky. If you took a picture of the sun at 12.00pm each week for a year, as indeed has been done here, you would be left with a figure 8 type image. This phenomenon is called the analemma. The slant of the Earth's axis is responsible for the figure 8; the elliptical orbit is responsible for the figure 8 having one bigger and one smaller half.

Such basics having been established, it is now necessary to clarify what exactly is meant by the term 'wandering noon'. As already mentioned, the day when the Earth's orbit tilts the north pole farthest from the sun is called the winter solstice and is the shortest day of the year in the northern hemisphere5. This occurs on 21 December in a leap year and the following year, but on 22 December in the next two years. Some may have noticed, however, that sunset starts getting later, beginning some days before the solstice6. Thus evenings get longer even as mornings continue to get shorter until the 21 December. Clock noon diverges from astronomical noon by as much as 16 minutes. Note that clock noon is the time at which clocks show 12.00pm and is repeated exactly every 24 hours, while astronomical noon is the point directly between sunrise and sunset when the sun is over the meridian, ie due south in the northern hemisphere or due north in the southern hemisphere. It is around the solstice, when the length of the day changes very slowly, that this effect is most noticeable.

What Causes Noon to Wander?

The explanation comes from the analemma. Recall that the analemma is the pattern by which the noon location of the sun varies. What it means is that the sun is not always directly at the meridian when clocks read noon. We measure an occurrence - noon, the daily apogee of the sun (which fluctuates subtly throughout the year) by dividing up its average period into 24 hours consisting of 60 minutes, which then in turn consist of 60 equal seconds. No wonder noon appears to wander.

To learn more about the analemma, or to see helpful animations, visit this website.

1A speed of 1,037.5 mph at the equator but slightly slower as you move to a higher or lower latitude.2Four minutes being 1⁄365th of 24 hours, although really the orbit is completed every 365.25 days.3At an angle of 23.5°.4Which is why seasons are opposite in the northern and southern hemispheres.5Although the same day is the summer solstice and the longest day in the southern hemisphere.6In 2003, the earliest sunset was 14 December in Britain.