Michael Parkinson - Journalist and Broadcaster Content from the guide to life, the universe and everything 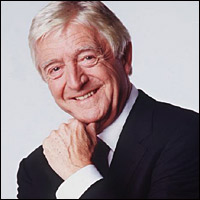 Unlike them, he was a journalist, from the print, from Yorkshire. He was therefore inquisitive. His mid-big to big-big-name guests, though often windily anecdotal, would sometimes be entranced by his rough charm into entering a zone of trust. Where they would spill.
- Times Online

Sir Michael Parkinson, aka 'Parky', has written for a variety of newspapers including the sports column of The Daily Telegraph. He is also the co-founder of Pavilion Books, but he is best known for his chat show Parkinson. A friend once said:

He is just a delight to work with in so many different ways. In terms of professionalism, he is unstuffy and never star-like. He is always assiduous in preparation and is simply never casual in his approach to anything to with work – and that is the same for his chat show too. To his great credit he has never become intoxicated with his own television myth, even though he is, quite simply, a legend.

Born 28 March, 1935, in Cudworth, near Barnsley, South Yorkshire, Michael Parkinson attended Barnsley Grammar School, leaving at the age of 16 with two 'O'-levels to become a journalist on the Barnsley Chronicle. He then undertook National Service, becoming the Army’s youngest captain in Suez, and took part in trials for Yorkshire Cricket Club, alongside Dickie Bird1. Another passion of his was watching films, as he recalls:

I used to go to the cinema four times a week. I knew how a New York taxi driver spoke long before I knew how anyone in Manchester talked. In the end, I got to interview the people I'd only ever seen before 30 feet high on a screen.

Eventually, he gained work with the Manchester Guardian, then began writing the sports column for The Sunday Times in 1965, which led him to write several books: Football Daft (1968), Cricket Mad (1969), Sporting Fever (1974) and Bats in the Pavilion (1977).

During his twenties, Parkinson met Mary Heneghan at a bus stop in Doncaster and fell in love. He remembers thinking:

I was covering the meeting and she was doing a keep-fit class there; she was a teacher. She was wearing a red duffle coat and the thought idly came to my mind that she had a face I would never tire of looking at.

Parkinson was so shy that he made his friend arrange a date for him and Mary. They married in 1959.

Our wedding was a strange day. Mary's parents were both dead, but the rest of her family didn't come because I wasn't a Roman Catholic. She made her own wedding dress and I borrowed money to buy a suit. We had the reception in a pub and went on honeymoon to Babbacombe, Devon, in an old Ford Anglia.

At the time of writing, the couple are still together and have three sons and eight grandchildren. They also share a passion for sport, often watching cricket or playing golf together.

In 1963, Parkinson accepted work with Granada Television on Scene at 6:30. He furthered his career in the media by working on World in Action and What the Papers Say, before becoming a reporter for BBC's Twenty-Four Hours. In 1969, he presented Granada's Cinema series and two years later landed the role of presenter for Teabreak2 as well as his very own TV programme, Parkinson. The show was originally due just a summer run; however, it proved so popular that it lasted until 1982.

After leaving the show, Parkinson became one of a group of five presenters who created ITV's TV-am breakfast news programme. Unfortunately, the programme was a flop, and Parkinson was soon looking for work elsewhere. He presented Thames Television's Give Us a Clue, LWT's All Star Secrets, Yorkshire Television's Parkinson One-To-One and Going for a Song and also found work with BBC Radio Two. In 1990, he started writing the sports column for The Daily Telegraph and four years later was approached by Radio Five Live and asked to present Parkinson On Sport, which was aired weekly for two years. His written work on sport has won him numerous awards, including being named 'Sports Feature Writer of the Year' at the British Sport Journalism Awards in 1995 and Cover magazine's 'Best Sports Writer' in 1999. In 1998, the show Parkinson was revived and lasted until 2004, when the BBC decided to bring back Match of the Day. In an interview with the BBC, Parkinson said 'When they bought the Premiership, they sold my playing field' and added 'ITV made the offer and what they did was give me what I wanted'. The show switched sides, lasting until 2007. In all, a total of 361 Parkinson shows were aired - it has even been shown in Australia, on ABC and Channel 10.

Parkinson once claimed that he was inspired by John Freeman who didn't intend to become a celebrity but became famous through the celebrities that he would interview.

He was the most famous face in Britain, yet you never saw his face. The camera was always on the person he was talking to, yet he became hugely famous, and I thought 'there's a lesson there, that's exactly what you must do'.

One of the first celebrities to be interviewed by Parkinson was Orson Welles, who was rumoured to have been kidnapped and flown over to Britain to appear on the show. Once Welles had appeared, other celebrities were keen to be interviewed, including Dolly Parton, Elton John, Sting, Rod Stewart, Nelson Mandela and Barry Humphries. One celebrity would inform another about their experience on the show, and so a steady stream of guests came forward, to descend the famous stairs to the sounds of the house orchestra, and then to sit on Parkinson's left-hand side to be interviewed.

Parkinson was drawn to the footballer George Best and witnessed at close hand the effect that alcohol had on him. Best 'lost a lot of goodwill when he kept drinking after his liver transplant and that's very sad. The only tragedy George Best had to confront, is that he will never know how good he could have been'. In 1975, Parkinson wrote George Best: An Intimate Biography.

Another celebrity with a love of alcohol was Billy Connolly. Parkinson first heard of him from a taxi driver, who gave him a copy of Connolly's sketch 'The Crucifixion' to listen to. After hearing it, Parkinson went to his producer and they invited Connolly on the show in 1975. His appearance paved the way for a two-month, sell-out solo UK tour, The Big Wee Tour, and numerous further appearances on Parkinson.

Not All Plain Sailing

Not every celebrity is wooed by Parkinson's charm, as the show revealed. Rod Hull's Emu wrestled him to the floor, Muhammad Ali tried to start a fight with him and Meg Ryan didn't quite give the in-depth answers Parkinson was looking for. When asked by the Daily Mail how she felt on Parkinson, she said she felt as though the host talked to her as if he were her father.

I felt like he was berating me for being naked in the movie. He said something like, 'You should go back to doing what you were doing'. And I thought, are you like a disapproving dad right now? I'm not even related to you. Back off, buddy. I was so offended by him.
- Meg Ryan

Parkinson however felt that Ryan was rude to not only him but the other guests.

I should have closed it. But listen, it happens. She was an unhappy woman. I felt sorry for her. What I couldn't forgive her for was that she was rude to the other guests.

Parkinson, once named by Q magazine as an influential figure in the music industry, was aware of the change in the portrayal of musicians in the media. For example, when interviewed by digital radio station The Jazz, Parkinson said: 'We did a 70- to 80-minute show with Duke Ellington which the BBC put out in its entirety. Can you see that happening now?'. In fact he felt he even had a struggle to promote the musicians Jamie Cullum, Razorlight, Diana Krall and Michael Bublé.

Oh absolutely. I mean the thought of putting someone unknown now on to television on a show like mine would cause them to have a heart attack, and you say to them 'look what happened to Jamie'.
- Parkinson

Change is also prevalent in the style of chat show aired today, in that the host doesn’t ask the celebrity probing questions that Parkinson would and young audiences are more interested in the so-called celebrities from reality television programmes such as Big Brother.

For the final show, Parkinson was asked to come up with a wish list of celebrities he would like to interview one last time and to his surprise they all turned up. Billy Connolly, Sir David Attenborough, Dame Judi Dench, Sir Michael Caine, David Beckham and Dame Edna Everage were all on the list but it was the 12-minute standing ovation from his audience that resulted in Parkinson shedding tears. Though Parkinson has now retired from his show he will still be kept busy by the media and his family. He also plans to write his autobiography.

1Later to become one of the game's best-known umpires.2His wife Mary joined him in presenting the show and eventually took it over.