'Taxi Driver': Viewing a Drama as a Horror Film Content from the guide to life, the universe and everything 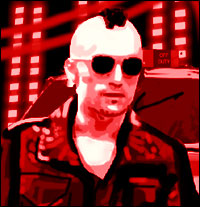 Nowhere in the horror rule book does it say there has to be either a mad killer, a malevolent spirit, a horrible alien life form, a legion of the walking dead, a tribe of savage cannibals, a man-eating shark, a mad scientist, a vampire, a mummy, a lycanthrope, or a dream-stalking child-molester for a film to qualify as Horror. These are popular misconceptions, but misconceptions nonetheless. John Skipp and Craig Spector1 once said that horror is the driving element behind every dramatic act you have ever witnessed. Taken at its core, this statement is true, and no film proves this rule better than Taxi Driver.

Taxi Driver, Paul Schrader's screenplay and Martin Scorsese's film, is about a man faced with ugliness. Everywhere he looks it surrounds him, it envelopes him, it rubs off on his skin. The picture that Scorsese paints of New York is one of urban decay personified. The streets themselves seem to ooze, and the slime that pours forth slowly but surely worms its way into the mind of our protagonist, Travis Bickle (played in his breakout role by Robert De Niro).

Herein is where the true horror of the story lies - the gradual deterioration of the human mind. True, Travis is not the most stable fellow in the world at the onset of the story; his experiences in Vietnam are alluded to, if not exploited. He is a little slow and a little confused. Perhaps he hears voices from time to time. He seems to have been strangely sheltered from several normal aspects of everyday life, but initially at least, Travis is an optimist at heart, looking for love among the ruins.

The targets of Travis' affection are Betsy, a liberated election-campaign worker (played by Cybill Shepherd), and Iris, a young prostitute and surrogate recipient of the love rejected by Betsy (a stunning turn by the then-13-year-old Jodie Foster). His pursuit of Betsy in particular is at first so honourable that you get the impression that if Betsy's father had been working in the campaign office with her, Travis would have asked for his blessing before courting his daughter.

The tragedy of their failed courtship is all the more realised because of the heartfelt attempts by Travis to win her, no matter how far off-base he shoots in his efforts. When he takes her to a Times Square porno theatre, completely oblivious to the mind-numbing faux pas he has just made, a chord of sympathy is struck as well in the midst of our shock. When Betsy expectedly shrugs him off, we follow his heartbreak every step of the way, culminating in a heart-wrenching phone conversation so painful that even the camera has to look away. As it turns out, this is the event that finally pushes Travis over the edge. In vainly searching for beauty, Travis is once again faced with ugliness. An ugliness that is now beginning to see growing inside him.

His sanity having taken a holiday, he decides to do what is always the easiest thing to do – hurt those we love. He fixates on Betsy's candidate, Senator Palantine2, the personification of her ideals, and decides to kill him. Failing that, he manages to actually find a flower growing amongst all the filth, the 13-year-old prostitute - significantly named Iris (the film does, after all, show us the city through Travis' eyes) - whose innocence is slowly wilting. At this point, his personal anger from Betsy's rejection of him is transformed into a kind of righteous fury, in which he is finally left with no other choice than to try and wipe all this ugliness off the face of the earth.

This is but one step removed from the voices in Michael Myers'4 head that told him to kill, or the constant internal nagging of Norman Bates'5 mother that finally drove him to murder. The only difference being that the lines between good and evil in these films are much more clearly defined than in Scorsese's film.

The conclusion to the film contains the most horrifying implication of all; that through a simple twist of fate, this psychopath comes to be regarded as a hero for his actions. Earlier in the film, Wizard,6another taxi driver, tells Travis in so many words that a man is defined by his actions – no great revelation. Indeed, not something that Travis even took seriously. Travis did not want to be a hero in the end; he simply could not stand it anymore. His redemption is a fluke, and all the more horrifying for it.

Would the climax of Friday the 13th not be that much more chilling if Jason was heralded as a hero for giving the irresponsible counsellors their just desserts? In Taxi Driver, the implications of this are truly terrifying, and cause the legendary blood shedding that comes before it to pale in its wake.

Taxi Driver: groundbreaking, thought provoking, and ultimately terrifying - all the hallmarks of a great horror film. And after all, what is horror anyway but drama of the primal? It does not get much more primal than this.

Though some will balk at the idea, categorising this film as horror is not meant to demean it or move it from its 'respectable' place in the drama category - far from it. A film as bold as this, which dares to recognise the true malevolence within the disintegration of the human spirit, can truly have no other classification.

1Authors of The Light at the End and The Scream.2Played by Leonard Harris.3Played by Harvey Keitel.4Of the Halloween series of films fame.5Of the horror movie Psycho.6Played by Peter Boyle.