'Bottom' - the TV Series Content from the guide to life, the universe and everything 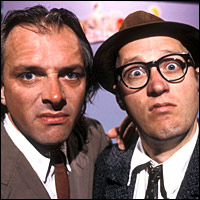 The main gist of the show is that the two flat mates would verbally, mentally and physically abuse each other using a wide variety of makeshift weapons, including, but not limited to:

As well as three seasons of the TV show, Bottom has also spawned three live tours, with performances of all three available on video. Mayall and Edmondson have also released the movie Guest House Paradiso, which is basically 'Bottom-The Movie'. Alas, save for a big fight scene and a gag involving a fishing rod and a nipple ring, it's not a patch on its small screen parent.

1Who also appeared in the fourth series of Blackadder in the role of the Red Baron.