The Legacy of Milton S Hershey Content from the guide to life, the universe and everything 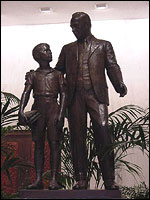 When Milton S Hershey died in 1945 at the age of 88, he left no heirs. But the community which he founded, and which bears his name, can rightly be considered his heir - the signs of the Hershey legacy are everywhere. Obviously, there are the chocolate factories which produce the world-famous Hershey's brand confections. But more than that, there is the town, school, and medical centre which bear his name.

Hershey left very few written records to tell us about his intentions and his philosophy. But in a small autograph book in the collection of the Hummelstown Historical Society, there is an original Milton S Hershey signature.

What Hershey wrote on the page is very revealing:

One is only happy in proportion
as he makes others feel happy
And only useful as he contributes
his influences for the finer callings in life.

This passage was written on 9 April, 1879, when Hershey was only 21. At the time, he was operating his first candy business in Philadelphia, which would fail three years in the future. Thirty years later, Hershey would be a rich candymaker and able to apply these ideals in the community which would bear his name.

Hershey's legacy can be broken into two distinct parts: his for-profit enterprises and his charitable giving.

On the for-profit side are the Hershey Foods Corporation, Hershey Entertainment and Resorts Company, and other smaller endeavours.

On the charitable side are:

There is a famous statue in the rotunda of Founders Hall in the heart of the Milton Hershey School campus. It is a bronze image of Milton Hershey with his arm around the shoulders of one of his school's students. Engraved at the base of the statue are the words,

His deeds are his monument. His life is our inspiration.

Hershey is regarded as a hero and mystical figure in the town which bears his name, especially among the older generation that can remember the impeccably neat little man, whose chocolate provided him the means to improve his small corner of the world.