The Hershey Trusts Content from the guide to life, the universe and everything 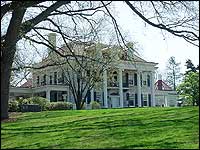 Between 15 November, 1909, and his death on 13 October, 1945, Milton S Hershey gave away a considerable amount of money to the benefit of others. The three trust funds he established during that period continue to benefit and enrich the lives of others - from the community which bears his name to the poor ghettos of inner cities across America.

The Milton Hershey School Trust was created in 1909. The Deed of Trust, its founding document, was drafted by Milton S Hershey's attorney, John Snyder. According to Milton and Catherine Hershey's wishes, the document established a fund and a school for orphan boys. The Deed also established the Hershey Trust Company as trustee of the school trust, whose board of directors oversee the school trust. The school's operations are overseen by the Board of Managers, who are chosen from the Hershey Trust Company's Board of Directors.

When Milton Hershey died in 1945, his will directed that the remainder of his estate (about $731,000) be placed into another trust, which was known as the Testamentary Trust or as the Derry Township School District Trust. The income from this trust fund is donated on a quarterly basis to the public school district to be used at its discretion. Currently, that trust provides about $1 million to the township's schools. This trust is also overseen by the Trust Company's board of directors and has the Trust Company as trustee.

A fourth trust for the benefit of The Milton S Hershey Medical Center was established in 1963 by a cy pres decree1 in the Dauphin County Orphans Court. Transferred through the Milton Hershey School Trust through the MS Hershey Foundation Trust was $50 million including land on which the medical centre and the Penn State College of Medicine were to be built. Penn State University is the trustee, and the responsibility to oversee this trust rests with the Penn State University Board of Trustees.

1Cy pres is a legal term meaning 'as near as'. It is used to resolve problems caused by stipulations in other documents, usually wills, that are deemed to be impractical or illegal.