Education in Hershey Content from the guide to life, the universe and everything 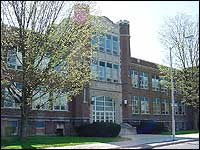 Milton Hershey planned for all his chocolate factory workers' needs when he designed the town surrounding the factory; and, even though he lacked much in formal education, he provided for school buildings from the very beginning.

In 1905, the McKinley School on the southeast corner of Chocolate and Cocoa Avenues was the first school building to be built by Hershey. Nine years later, he spent $100,000 building the consolidated school on the site, which would later become home to the Hershey Middle School and Hershey Public Library until the 1990s. The consolidated school was home to all the students in Derry Township, bringing them in from the 15 one-room schoolhouses that were scattered throughout the surrounding farmland.

Next to the consolidated school, Hershey built the MS Hershey Junior-Senior High School. Built at a cost of between $300,000 and $400,000, the school was donated to the public school system by Hershey in 1925. The saying in town was that students would enter one end of the building aged five to attend kindergarten and would leave the other end 13 years later with a high school diploma.

MS Hershey's final act was to support public education. In his will he created the Testamentary Trust with the $731,000 that represented the remainder of his estate. The money was invested by the Hershey Trust, which still oversees the investment. The income from this trust is paid to the public school district and is estimated to be more than $1 million per year.

But even after his death, public schools were provided for by Hershey's legacy. In 1954, nine years after Hershey's death, the Hershey Elementary School was built and donated to the community by the MS Hershey Foundation. The initial school building was to house children in grades K-3 and consisted of 21 classrooms on a 23 acre site. In 1956, the Foundation built and donated 14 more classrooms. In 1958, the MS Hershey Foundation built and donated an annex onto the Hershey Junior-Senior High School, as well as the gymnasium that was added to the east end of the building in 1960.

The first public financing of school construction in Hershey occurred in 1961 with a renovation of the Hershey Intermediate School, as the consolidated school was then known. In 1965, another publicly-funded bond issue was needed to renovate the Junior-Senior High School. And from that point on, all new school buildings or renovations have been paid for by the taxpayers.