Milton Hershey School Content from the guide to life, the universe and everything 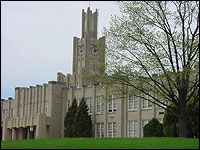 'It was Kitty's idea,' Milton S Hershey always said when he spoke of the Hershey Industrial School.

Both he and his wife Catherine shared a love for children; but early in their marriage, they realised they would never have children of their own.

In their discussion of creating the school, Kitty was said to have wished to provide a haven for those in need of a good home and a better chance in life. To that end, the couple established a trust fund in 1909 to fund a school for 'poor, healthy white orphans between the ages of 8 through 18 years of age.'

The paperwork was signed 15 November, 1909, in New York City, deeding 486 acres of good farmland, including the Hershey Homestead and all the livestock, buildings, and other property to the Hershey Trust Company as trustee 'with the purpose of founding and endowing in perpetuity an institution to be known as the 'Hershey Industrial School' to be located in Derry Township.

This was to be a home where boys who had lost one or both parents by death could live and learn. Hershey explained that his new school was intended for boys, and that girls were not accommodated, because of two reasons:

First, in an orphan situation, they are less wanted around the house because they don't take to housework and homemaking chores like girls do, mainly because they think of cooking and cleaning and sewing as 'sissy' things to do. The other reason is because the boy is in need of training as a future head of a family and the main wage earner. If he's trained well enough, he can buy a home and support his family so his wife won't have to work - outside the home that is.

So on 1 September, 1910, two boys were admitted to the school. Their father had died after a long illness; and their mother tried to support her six children by washing and ironing clothes, but was unable to make ends meet. Two other boys were admitted a few days later. The boys lived in the homestead1 and classes were held in the west end of the building in his father's library. The school grew and expanded into other buildings on the Hershey property.

Enrolment at the school continued to creep upward, with 40 boys enrolled by 1914. Then, on 25 March, 1915, Kitty died in Philadelphia after a long illness. After her death, Milton donated his entire estate to the Hershey Trust for the benefit of the school, including thousands of acres of land and all his stock in his chocolate company.

Hershey travelled around the country, talking to educational experts about the best way to administer the school. But he maintained the basic precepts that inspired him to open the school in the first place.

After Hershey's death in 1945, the school saw several changes. In 1951, the name of the school was changed to the Milton Hershey School. On 22 May, 1968, the school announced a new policy of accepting students of any race. The first non-white student was enrolled in August of that year. The school's Deed of Trust was modified in 1970 to reflect this change in admissions policy. The Deed of Trust was modified again in 1976 to allow for the enrolment of girls. It was at this time that the deed was modified to expand the definition of orphan to include any child not receiving adequate parental care at home, allowing for the enrolment of 'social orphans'. Then in March 1977, the first girls were admitted to the school. The practice of milking cows twice a day was discontinued in 1989, because it interfered too much with extracurricular activities.

Currently the campus has 97 student homes with a married couple, who serve as surrogate parents for the 10 - 12 students in their care. The school enrols about 1,000 students on the 1,400 acre campus. Most of the students are now the 'social orphans', which the Deed of Trust described in 1976. But all of the children benefit from that original gift, which is now worth more than $5 billion. The interest alone on Hershey's gift is more than $100 million a year, more than enough to cover the school's annual budget of $65 million. The leftover money now totals more than $750 million, which is being used to help fund an expansion at the school to accommodate a growth in enrolment to 1,500 students.

'The school was Kitty's idea,' Hershey was often quoted as saying. 'If we had helped a hundred children it would have all been worthwhile.'

Instead, the school has helped thousands of children in its 90 plus year history; and most of the school's alumni would agree that it was, indeed, well worthwhile.

1The home built by his grandfather, where Milton Hershey grew up.