The Milton S Hershey Medical Center Content from the guide to life, the universe and everything 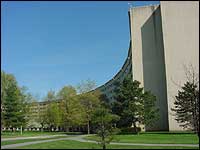 Outside the main entrance to The Milton S Hershey Medical Center there is a small blue and white sign, which details the infamous $50 million phone call that lead to the creation of the hospital and medical school.

In the early 1960s, the Hershey Trust sought to perpetuate the philanthropy of chocolate baron Milton S Hershey. Samuel Hinkel, chair of the Trust and a Penn State Trustee, approached university president Eric Walker about the possibility of establishing a college of medicine. It was agreed and on August 23, 1963, a gift of $50 million for that purpose was announced.

But how that $50 million gift came to be was a difficult legal road. The Hershey trustees examined their books and found that the school trust's principle was more than $300 million with annual interest income of $97 million. Since this more than covered the expenses of the Milton Hershey School, the trustees sought another route to carry on Hershey's philanthropic legacy.

The first step was finding a way to allow for spending the money for something other than the school Hershey founded for orphan boys. A team of attorneys spent months researching how this could be done. With the legal details worked out internally, the $50 million phone call took place as the Hershey Trust contacted Pennsylvania State University's trustees. The only condition the Trust placed on the university was that the Medical Center must be built in Hershey.

An offer of $50 million swayed the university and then the Hershey Trust officials and attorneys contacted the governor and state attorney general to seek their blessings. With the state's political leadership on board, the Trust approached the county courts to get approval to transfer the money from the Milton Hershey School Trust to the MS Hershey Foundation. The county court approved the transfer in 1963, paving the way for the construction of the Medical Center.

In 1969, the Hershey Trust conveyed the recently constructed facility to Penn State University, in order for Penn State to receive federal grants and funding. The facility included a medical sciences building; University Hospital; a 50-acre animal research farm; a helicopter pad site; a steam plant; a laundry; and 248 apartments for students, interns, and residents. In addition, the initial 100-acre site proved to be too small, and the Trust gave another 204 acres.

At this time an unwritten promise that the Hershey interests would not develop the lands surrounding the Medical Center was also agreed upon. In the intervening years, the campus has expanded to its current 550 plus acres.

A formal ground-breaking ceremony was held on 26 February, 1966, and Penn State's College of Medicine opened in September, 1967 with the first class of 37 men and three women. Dedication ceremonies for The Milton S Hershey Medical Center of the Pennsylvania State University and Teaching Hospital were held at the first commencement in 1970. The patients were seen later that year at University Hospital.

However, many insiders said the merger was doomed from the beginning due to different institutional cultures in the two groups, and a break-up of the two systems began in November 1999. By June 2000, the Hershey Medical Center was a Penn State facility again. 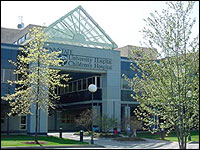 The Medical Center is also home to the 120 bed-Children's Hospital, which is among the best in the US, providing such services as transplant surgery and the treatment of cancers.

The College of Medicine continues to offer a first-rate education with more than 400 resident physicians and post-doctoral scholars and fellows taking place in the programmes there.

This modern, state-of-the-art facility is a far cry from the days when the community would go to the infirmary at the Milton Hershey School for medical treatment.

Most of the Medical Center's staff and administrators feel confident that Milton S Hershey would approve of the high quality care that they provide to his town; and every time they walk in the main entrance of the hospital they are reminded of Hershey's philanthropic legacy, which made the Medical Center possible.