Rangoli - Indian Art Content from the guide to life, the universe and everything 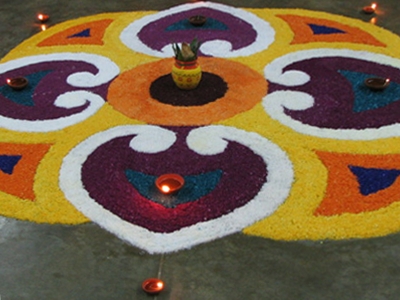 Rangoli (pronounced ran-goal-ee), otherwise known as Alpana and Kolam, is a traditional Indian art form. Rangoli are said to bring good luck and fortune during the Hindu festival of Diwali (the Festival of Light). They are created in front of the entrances of houses, in courtyards, in places of worship, at workplaces and at eateries. A Rangoli is made from flour, sand, parts of flowers, colourful food ingredients and other household items. The skill is taught from one generation to the next, and this Entry aims to give the reader some idea of what is entailed.

Usually the art form shows a traditional Indian image, which can be any size the artist chooses. First the artist decides on a design that they want to create. This design could be traditionally geometric in shape and symmetrical, or may be inspired by books and magazines, or come from the artist's own imagination. Many of the designs are circular in shape, reflecting endless time. Images of animals such as cows, elephants, lions, horses, and birds such as eagles and swans are also popular.

Once the design has been chosen, it is time to choose the ingredients that will give both colour and beauty to the artwork, then to clear and clean the floor where the Rangoli will be created. The area to be worked on should be marked out with dots. Sometimes the artist may design their image on a piece of paper and shade it in using coloured pens before they start the proper Rangoli.

Traditionally, rice or wheat flour, kumkum and haldi are chosen to create a Rangoli at the place of worship, because they are considered auspicious. For home use, rice powder and sand can be used, but you can utilise sawdust as well. In addition, a wide variety of natural substances such as leaves, flowers, fruit, spices, seeds and grasses can be used, as can man-made sources like powder paints. Some ingredients such as sawdust, sand and rice can be coloured1 before being used in the Rangoli. To colour rice, simply add a few drops of food colouring and allow time for the rice to dry. A word of warning: if the coloured rice is not completely dry it may stain the floor.

Once the area in which the Rangoli is to be made is clean and dry and the ingredients have been chosen, it is time to outline the image in chalk. Using chalk allows for mistakes in the design to be rectified, as it is easy to rub out. Now, using the thumb and index finger, pick up the first component. Follow the chalk outline, and with a steady hand, place it in the design outlined. Try not to mix the colours or run over the lines. Gently fill in the design. With time and patience the Rangoli will take shape and be pleasing on the eye to even Lakshmi (consort of the preserver and protector of the Universe).

We first made the eyes, nose, mouth, forehead and hair. Each eye took an hour and-a-half to make. There is a technique for spreading sawdust in a way that it falls evenly on the floor and this we learnt from our seniors.
- Prashant Mani talking about the Rangoli lion which took four medical students 12 hours to create.

Rangoli can also be painted onto walls as visual prayers. Often the paintings reflect the Hindu gods and goddesses such as Brahma (creator of the Universe), Shiva (the destroyer of the Universe), Vishnu (preserver and protector of the Universe), Lakshmi (Vishnu's consort), Kali (wife of Shiva) and Krishna (an incarnation of Vishnu). The most popular of these gods to picture in Rangoli is Lakshmi, who is believed by Hindus to visit their houses during Diwali. In order for her to find her way easily, diyas (oil lamps) are often placed around the Rangoli. Lakshmi is often pictured holding a lotus flower, but many other exotic flower designs, and more common flowers such as roses, passion and marigolds, are used in Rangoli as well.

1Do not forget to wear rubber gloves if using dyes and dyeing tools to protect your hands from being stained.