Bird of Paradise - a Heavenly Flower Content from the guide to life, the universe and everything 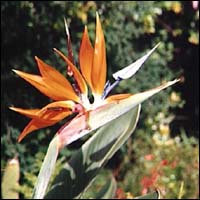 What is the most gorgeous, visually extravagant flower you can think of? If you were to go by the name alone, it would have to be the Bird of Paradise. Were you to judge by appearance, then this stunning bloom would also win hands down. It is even reported to taste very nice1. It fails its adoring fans by lacking any marked scent, only making up for this deficiency by being very possibly the most spectacular cut flower to be found at the florist, and it lasts for weeks in the vase. But is it possible to grow the plant itself at home?

A Bird by any Other Name

The Bird of Paradise is so called because it resembles the plumage of said bird. However, it is also called the Crane Flower, again because of its resemblance to a bird, in this case a crane with its head thrown back and its beak open. A third name it goes by is Geel Piesang, which should give the keen-eyed and Afrikaans-savvy a clue as to its origins. Finally, in botanical terms, this is a rhizome of the family Strelitziaceae, named after George III's German queen, Charlotte of Strelitz.

In order to understand how to care for the Bird of Paradise, it is important to know about its natural habitat. It is related to the banana and naturally grows in coastal areas or on river banks in the Eastern Cape province of South Africa. This has a tropical, mild and humid climate, so in temperate regions the Bird of Paradise will only grow in a hothouse or conservatory. In Britain, the best place to see a full plant has to be Kew Gardens.

The Bird of Paradise is a bold diva of a plant. The evergreen leaves stand one and a half metres tall with the flowers preening proudly above: on top of a long stalk, bright yellow or orange petals stand erect over a long midnight-blue tongue emerging from a long green beak-like bract below. A mature, well-nourished and nurtured plant will flower continuously, except during summer.

Despite being hardy in the right (warm and humid) environment, this is a plant that hates having soggy feet. It is best allowed to dry out between watering, and benefits from a healthy dose of plant food at the end of summer, just before it begins flowering. It is easy to control growth by selecting the right-sized container as root restriction will retard it. Being somewhat masochistic, a side benefit of crowding is that the plant will then flower more profusely.

The Birds and the... Birds

The plant is most easily propagated by 'splitting' the rhizomes, or cloning. It can be grown from seed but this is not always successful. To acquire seeds, it needs to be pollinated. Again, it is important to understand how it is pollinated in the wild in order to know what to do.

In its natural habitat, the Bird of Paradise is pollinated by nectar-seeking birds. The little bird lands on the long green bract and scoots forward to dip its beak into the succulent centre of the flowers. In doing so, the bird gets its feet tangled in the stamen and picks up some pollen. When it visits the next flower, some of the pollen is deposited on the stigma, thus fertilising it. The plant subsequently fruits and seeds grow from there to be harvested when fully ripened.

The very hard shells of these seeds need to be beaten up a bit in order for them to germinate. Presumably, in the wild this would be a service performed by animals seeking sustenance. To achieve a similar outcome, you could use a nail-file to scrape around the seed before planting it. It is also important to note that to pollinate your plants successfully, you will need pollen from a different specimen2, as the virtuous Bird of Paradise is not naturally incestuous.

In Case You Didn't Know..

1In the TV series Farscape, the Scarrans are hooked on Bird of Paradise flowers and, finding out that the earth has lots of them, they aim to go through the wormhole that leads there, to enslave the humans and to steal all their lovely blooms. This is just one of the storylines which never reached a conclusion because of the show's cancellation after Season Four. 2Not plants originating from the same rhizome either.