How to Wear a Kilt Content from the guide to life, the universe and everything 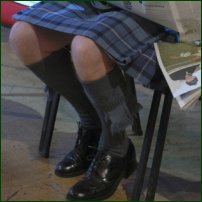 A kilt is a garment closely associated with Scotland, worn mostly, but not exclusively, by men. Some say it is only truly The Kilt when worn by men. It is sometimes used for school uniforms, and forms part of the scout uniform in Scotland. It is made of a long piece of woollen cloth, densely pleated at the back, flat at the front, held in place with buckles at the waist. Opinions vary as to when the kilt first made an appearance, but it certainly existed in the 16th Century. It was, at one time, proscribed as a weapon of war, before enjoying a revival during Queen Victoria's reign.

What's Worn Under the Kilt?

Answer: Nothing, it's all in perfect working order!

Despite the long-running myth about going commando1 in a kilt, there is no dictat which requires this, and comfort, warmth and decency often prevail. This will not, however, stop people trying to photograph under your kilt when you are wearing one. Surely there must be a gap in the market for a pair of undies with a 'Get Lost'-style message on them!

How Long Do You Want It?

Answer: I want to keep it!

The kilt should fall to the middle of your kneecap, although the hardy souls in Aberdeen usually wear those just above the knee. More modern kilts can be shorter than this, and fashion kilts can be very, very, short indeed. Modern or fashion kilts do not restrict themselves to tartan, and can be made from cotton, denim or even leather. A dress or military kilt will be made of longer and heavier cloth than a day kilt. A custom-made kiltmaker will ask for measurement of your waist, hips and desired kilt-length: for the latter, kneel on the floor and measure from your waist to the ground. A proper custom made job will cost, at the time of writing, in the region of £500, plus all the necessary bits to go along with it, which can double the price.

What Do I Wear With It?

There are a number of accessories which a well-dressed kilt-wearer will sport, usually with some history or purpose behind them:

A kilt-wearing groom was asked on his wedding day: 'What's the tartan?'
To which he replied: 'Och, she'll be in a white dress'.

A wide range of tartans exists, although the association of a specific colour and pattern arrangement (or sett) with specific clans only began about 200 years ago. Nevertheless, when choosing a tartan to wear, using your surname is a good place to start. If you have a Scottish surname, a tartan can readily be found, but many other surnames have a link to a specific clan and hence tartan. Most clans will have a day and a dress version of their tartan.

Royal Stewart, as the personal tartan of Queen Elizabeth II, may be worn by any of her subjects, as a mark of allegiance to the head of the clan. Balmoral tartan was created by Queen Victoria and Prince Albert around 1850; it is personal to the Royal family and kilts can only be worn by their members, or the Queen's Piper. Prince Charles favours a kilt of Lord of the Isles tartan.

Non-clan tartans are known as District tartans. Many of these have been created to represent geographical places - if you want a pretty colour or pattern, there are a number of designs which have been invented, particularly for the lucrative Scottish-American tourist trade. The Isle of Skye have created a tartan with soft hues of purple and green, echoing the misty heather-covered hills on the island.

Irish variants are usually a solid colour, often saffron or green. The Ulster-Scots connection has a long history, and a piece of tartan cloth discovered in a County Antrim peat bog in 1956 has been dated back to the 1590s - 1650s. Its design was used to create an Ulster tartan.

Most kilt-wearers - even in Scotland - keep their kilts for special events such as weddings, Christenings, Hogmanay, St Andrew's Day, Burns Night and rugby matches4. However, the wearing of the kilt as everyday garb is not unknown in the Highlands.

To keep the pleats in shape when being stored or in transit to the event, the kilt should be rolled, rather than hung, pleats facing inwards. Special 'kilt rolls' exist for this purpose, but the same effect can be achieved by putting the rolled-up kilt into the leg of a spare pair of tights.

Kilts feature in a number of songs and films. An old Victorian music-hall song, 'Donald Where's Yer Troosers?' tells of a young man journeying to London from Skye, and being teased because of his kilt. Carry On Up the Khyber features a regiment known as 'Devils in Skirts', whose reputation for going knickerless is an important morale booster and out-psyching the enemy manoeuvre. In the 1980s Spandau Ballet were known for wearing frilly shirts and kilts, although they stopped this practice after a while, goodness only knows why.

1Without underwear.2Pronounced skee-in doo.3If it's kept in its usual location, under the arm, it can be more easily reached in the event of confrontation.4A much better demonstration of fierce allegiance to one's team than a poncy scarf.