Knots Content from the guide to life, the universe and everything 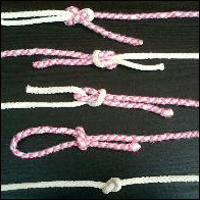 A knot is an intertwining of one or more ropes. Knots can also be tied in string, cotton, ribbon, wire, strips of leather, and numerous other materials. Knots are used in many hobbies such as rock climbing, sailing and lace making. They are also used everyday to tie up shoelaces, put up washing lines, tie ribbons on presents and numerous other tasks. It is important to use a suitable knot for the task at hand. Few people take the time to learn a suitable knot, hence the number of shoelaces that come untied and washing lines that fall down.

Knots have been used by humans since prehistory. The Incas of Peru used knots instead of writing - the type of knot, the colour of the cord and the position of the knot on the cord all helped convey complex messages. As well as functional uses, knots have been used for decoration. Many decorative items can be made with knots, including clothing, jewellery and wall hangings. Knots also appear in art, such as the Celtic knot designs.

In more recent times, attempts were made to write down information on knots and knot tying. The most comprehensive guide to knots is The Ashley Book of Knots by Clifford Ashley. It was first published in 1944. This weighty1 volume contains thousands of different knots.

There are many terms used in knot tying, describing parts of knots and specific types of knots. Here are a few of the most commonly used terms:

The International Guild of Knot Tyers

In the acknowledgements of many recent knot books the International Guild of Knot Tyers, or IGKT, will be mentioned. The IGKT was officially started on April, 1982. The aims of the IGKT are to promote knotting, research into knotting, and to act as a consultable authority on knotting. Additional information can be found on the IGKT Website.