Dusty Springfield - Singer Content from the guide to life, the universe and everything 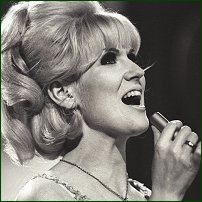 Mary O'Brien was born in London on 16 April, 1939, the daughter of a quiet-natured father and a mother who expressed herself by throwing things. Largely ignored by her parents who concentrated on their son, the lonely girl was sent to a convent school where she gained a reputation as an attention-seeker.

A tone-perfect singer with a soulful voice, Mary first recorded as one of the Lana Sisters. When her brother Dion turned professional he invited his vocally talented sister to join him and Tim Field in the folk group The Springfields. Dion changed his name to Tom Springfield and Mary became Dusty (a nickname she acquired at school, as she was a bit of a tomboy) Springfield.

Folk singing did not suit Dusty; she felt it was old-fashioned and wanted to branch out in a different direction, namely R&B. She was a great fan of the music produced by Motown, a predominantly black recording label.

Between 1963 and 1970 Dusty was queen of British popular music. Her hits in that decade include 'I Only Want To Be With You' (1963), 'Stay Awhile', 'I Just Don't Know What To Do With Myself', 'All Cried Out' and 'Losing You' - all UK Top Ten hits from 1964. She was the first artist to appear on the BBC's new pop programme Top of the Pops, singing 'I Only Want To Be With You'. In 1965, 'Your Hurtin' Kinda Love' and 'Some Of Your Loving' were followed by the UK chart-topper 'You Don't Have To Say You Love Me', which was a smash hit both sides of the Atlantic.

Quite often, British artists who are phenomenal superstars at home can find it notoriously difficult to crack the American market. Dusty Springfield had no such problem. Her next two singles, 'I'll Try Anything' and 'Give Me Time' were received with equal enthusiasm on both continents. Then, 'The Look Of Love' was featured in the James Bond spoof film Casino Royale - the 1967 original starring Peter Sellers as Evelyn Tremble/James Bond/007 and David Niven as Sir James Bond - adding further kudos to her musical repertoire.

In 1964 Dusty was due to tour South Africa, but when she found out she would be performing in front of segregated audiences, she managed to engineer an anti-apartheid clause in her contract. She was the first performer to do this. When the South African government found out that she was singing to mixed audiences, they arranged for her deportation:

It was not my intent to spark an international incident, but rather to simply play my music to everybody, equally.

From 1966 - 1967 Dusty had her own BBC television programme, Dusty on which she sang her own songs (such as 'All I See Is You') as well as introducing and chatting with guest stars such as Welsh crooner Tom Jones, before closing the show with a duet. The show was quite successful, with fans young and old tuning in. Dusty's appeal was universal. She was equally liked by men and women - a good-looking girl who was the epitome of Sixties fashion with her mini-dresses, heavy eye make-up and big hair cemented in place with a full can of hairspray.

In addition to being very comfortable in front of the camera and having the ability to make the viewer feel like she was singing just for them, Dusty was able to chat with her guests who weren't always as easy-going. Some of the participants were known recluses or notoriously shy - not the kind of personalities who generally come across well on live shows in front of an audience. It's testament to Dusty's people skills that she was able to get them to perform at all.

Dusty capped her most successful period with an appearance on the bill of the 1967 London Palladium Show. In 1968 'I Close My Eyes And Count To Ten' made the UK top five. She then recorded a cover of 'Son of a Preacher Man' in Memphis. This subsequently scored a Top Ten hit in the US as well as the UK. The single was so successful that an album Dusty In Memphis was released in the US and received many accolades, even though Dusty herself hated it.

The difficulties of being an extremely gifted female performer in a world of music dominated by male record executives caused Dusty great personal stress while recording, especially during the Seventies. Although she was an intensely private person who fiercely guarded her private life, in an interview in 1972, Dusty admitted that she was bisexual:

I know that I'm as perfectly capable of being swayed by a girl as by a boy.

Rumours persisted that she was a lesbian, although Dusty hated the thought of her fans labelling her as 'butch'. Privately she spent time with her friend the tennis champion Billie Jean King, and worked diligently for several animal rights charities.

Although she'd had seven years of hardly ever being out of the charts, scoring 18 hit records, Dusty failed to keep up with the changing tastes in music. Despondent, she struggled to cope mentally and sank into depression, relying heavily on drugs and alcohol. Distressed people sometimes harm themselves and Dusty was no exception. In what became a self-imposed exile, in the early 1970s she disappeared from the music scene, spending time in the US and Canada. She became a relic of a bygone age, living only in people's memories as she fought her demons.

Dusty had not been forgotten by the industry though. Her hits were regularly chosen for film soundtracks, and some songs were specially chosen. On 3 May, 1978, she recorded Craig Safan's 'Give Me the Night' as the theme song for Corvette Summer. These one-off jobs, plus re-releases of her massive hits and inclusions in compilation love song CDs provided her with an income.

In addition to eventually conquering her alcohol and drug addictions, Dusty recovered enough to make a comeback, epitomising the image of a tragic diva reviving her career with her fabulous voice intact.

In 1987, Dusty featured with the Pet Shop Boys on 'What Have I Done To Deserve This?', and another collaboration, 'Something in Your Eyes' with Richard Carpenter, was eagerly received in the US. Her hit 'I Just Don't Know What To Do With Myself' was used to great effect in the 1988 film Buster, starring Phil Collins and Julie Walters. Even though the subject matter was controversial1 the film was a smash hit and its soundtrack won a Brit Award in 1989.

Quentin Tarantino's use of 'Son of a Preacher Man' in Pulp Fiction brought Dusty to the attention of a whole new generation of fans in the mid-1990s. Drag queens liked to dress as the 1960s Dusty and she took that as a huge compliment, stating that she was basically a drag queen herself.

In 1994 Dusty was diagnosed with breast cancer and underwent radiation therapy. By early 1995 she announced that the cancer was in remission. On 9 February, 1998, Dusty had been due to appear at the Brit Awards, but compére Ben Elton announced that she was too ill to attend. Dusty was battling a recurrence of the cancer and her manager and longtime friend Vicki Wickham said they had every expectation that she was going to make a full recovery. In the New Year's Honours list, Dusty was announced as recipient for an OBE (Order of the British Empire), but she was too ill to attend the ceremony. It was rescheduled, but on the day she had been due to receive her honour from the Queen, 2 March, 1999, Dusty passed away. She was 59 years old. A life-long animal lover, she left behind 12-year-old Nicholas, her beloved pet cat. Dusty's coffin was carried through Henley-on-Thames by a horsedrawn carriage and hundreds of fans joined friends and celebrities at the funeral.

Dusty was the first one to demonstrate girl power. She was a real powerful force but yet she was shy. She was very vulnerable. She drew me close to her. She had tremendous courage and she bared her soul to the whole world. I say now that she and her gift have returned to Heaven. She had such a great spirit that it will never die.
- Singer and actress Lulu, who addressed the congregation at St Mary The Virgin Church.

Following the cremation, Dusty's brother scattered her ashes from her favourite place - the Cliffs of Moher, County Clare, Ireland. A female dolphin which appeared shortly afterwards has been named 'Dusty' after the singer.

Since her death, Dusty's distinctive soulful voice can still be heard regularly on new film soundtracks and in popular television programmes such as EastEnders and Malcolm in the Middle. Her music transcends genres and has an enduring appeal. Grainy black and white footage of Dusty appearing on early Top of the Pops episodes are regular hits on the YouTube website.

Dusty was inducted into the Rock and Roll Hall of Fame in Cleveland, Ohio, in 1999. The Heritage Foundation unveiled the very first musical heritage plaque in honour of Dusty Springfield on 29 April, 2001. The blue plaque is displayed at 38, Aubrey Walk in Kensington, London, where Dusty lived from 1968 - 72. In American Dreams, a television series set to the soundtrack of the 1960s which ran from 2002 until 2005, the part of Dusty Springfield was played by singer/songwriter Vanessa Carlton.

A double CD Another Piece Of My Heart: The Love Songs was released in early 2006. The musical Dusty opened in Melbourne, Australia, on 12 January, 2006, before moving to Sydney in March, 2007. Dusty was inducted into the UK Music Hall of Fame for 'Outstanding contribution to British music and integral part of British music culture' on 14 November, 2006.

Record producer Hal Lifson released a CD of music from the extremely successful television programme Desperate Housewives which includes Dusty's 'Just A Little Lovin'. Tony Award winner Kristin Chenoweth is reported to be the artist chosen to play the part of Dusty in an forthcoming film about her life.

You could hear just three notes and you knew it was Dusty. It was such a rare and beautiful voice. I just want to add my thanks for every beautiful note Dusty sang.
- Songwriter Burt Bacharach's tribute at Dusty's funeral.

1Buster was based on the story of Buster Edwards, a thief involved in the Great Train Robbery of 1963. He escaped but missed his family so much he eventually gave himself up. As it was portrayed sympathetically from the robber's point of view, objections were made by the families of the real victims of the crime.