Chocolate Mole Content from the guide to life, the universe and everything 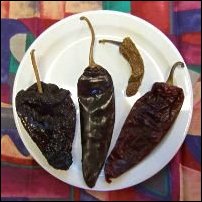 One small bite of mole (pronounced MOE-lay) holds a big mouthful of flavours - sweet, bitter, fruity, earthy, and piquant. Moles are part of Mexican cuisine and are used traditionally to make stews with chicken, turkey, pork, or beef. Dark chocolate blends well with these savoury ingredients to bring out a rich, complex flavour.

The word mole comes from molli, the Aztec word for sauce. Moles usually feature a variety of dried chilli peppers and an impressively long list of other ingredients that often, but not always, includes chocolate.

A Brief History of Moles

Chocolate was not part of any mole prior to the 17th Century. Many fanciful legends have sprung up about the origins of mole poblano, the traditional mole from the Mexican state of Puebla. The most likely story is that the nuns from the Santa Rosa convent near Puebla City, Puebla, collected mole recipes from the indigenous people, modified a mole recipe by adding cocoa, and served the tasty dish to a visiting dignitary.

Today, there are probably as many family mole recipes as families to eat mole. The number of ingredients ranges from 10 to over 301, with most recipes having over 20 ingredients. Chocolate is a traditional ingredient in mole poblano and mole negro oaxaqueño, the latter being black mole from the state of Oaxaca.

A Bit About Chillies

The chilli, regionally spelled either chile or chili, has been part of the South American diet for thousands of years. Pasillas, anchos, mulatos, guajillos and chipotles chillies are mild to medium in heat, very flavourful, and often used in mole:

Although chillies originated in South America, thousands of chilli varieties are grown around the world. If you have difficulty finding these varieties of chillies, try other flavourful varieties with mild to medium heat.

Safety warning: Capsaicin, the spicy substance in chilli peppers, is an irritant. When you are handling chillies, you should wear gloves. Never rub your eyes. When you toast the chillies, the capsaicin released into the air can irritate the lungs and airways if inhaled. Toast chilli peppers in a well-ventilated area or better yet, outside.

The cinnamon used in Mexican cuisine is the soft Ceylon cinnamon, also called canela, not the hard stick cinnamon.

Plantains are firmer than bananas, and not as sweet. If you substitute bananas, use less sugar.

If you can't find an ingredient, try something else: dried apricots instead of raisins; toasted bread or tortillas instead of almonds. Vary the spices, put something in, take something out. Be creative. Do you have some dried currents left over from last December? Did someone give you courgettes (zucchinis)? Do you want to use yams (sweet potatoes) instead of plantains? Throw them in!

When making mole, you'll need to char some ingredients - in other words partially burn them. For example, the tomatoes are charred so that their skins have blackened and blistered spots. The charred ingredients provide flavour and colour in moles the way deeply roasted barley does in porters and stouts.

Chillies, nuts, seeds, and spices are toasted in a frying pan to bring out their flavours.

A comal is the traditional Mexican clay griddle used to char and toast foods. Comals are now more commonly made from iron, steel, or aluminum. You can use any heavy-bottomed skillet, such as a cast iron skillet.

Due to the large number of ingredients and the many labour-intensive steps, there really isn't any point in making a small amount of mole sauce. This recipe makes about 5 litres of mole paste, which can then be thinned with stock to make about 7½ litres mole sauce.

This is a matter of personal taste, as is cookery in general, but the chocolate should complement and not overwhelm the other flavours. Add small amounts of chocolate and taste the mole before adding more. Cleanse the palate between tastes, perhaps with a pale ale or a lager.

To use the mole paste, dilute 2 parts paste to 1 part stock. For vegetarian dishes, dilute with vegetable stock.

1Attempts to find the recipe for the legendary 100-ingredient mole have not been fruitful.2Alternatively, put the chocolate in a pyrex bowl partially submerged in a pan of near-boiling water and let it melt.3In other words, remove the stem and seeds.4As mentioned above, this means you'll need a frying pan, not a toaster.5The bit that isn't the stem or seeds.6If freezing, the mole should be frozen right after it has cooled.