The Rules of Monopoly Content from the guide to life, the universe and everything 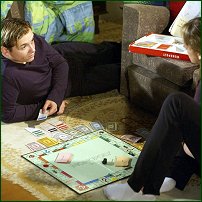 During the Great Depression in the USA, a man named Charles B Darrow of Pennsylvania created a board game that let even common people feel like the great entrepreneurs of the time. He originally produced the game with a friend in the printing business, and sold it through toy shops in Philadelphia. The demand for the game became so great that he had a hard time keeping up production. He turned to the game company Parker Brothers for assistance. They initially rejected Darrow's idea, but after a while they offered to purchase the game. Now, Monopoly is currently sold in 80 countries and in 26 languages.

Most people don't know, however, that Monopoly is related very closely to a game called The Landlord's Game which was created and patented in 1904 by Elizabeth 'Lizzie' J Magie, from Virginia. Magie developed the game, which, like Monopoly, had 40 spaces, four railroads, two utilities, 22 rental properties, and spaces for Jail, Go to Jail, Luxury Tax, and Parking, as a way to teach the single-tax theory.

The purpose of Monopoly is simple and to the point. Purchase properties and drive the other players into bankruptcy.

After a suitable2 Banker has been chosen, he or she will distribute the $1500 to each player. The assets of the bank and the players must remain separate. In other words, the Banker does not get any perks for holding this position. At the beginning of the game, the bank holds all properties.

The bank collects all taxes payed during the course of play, as well as fees and fines. If a player lands on a property and does not wish to purchase it, the banker auctions the property off to the highest bidder. The starting bid is usually at least 10% of the asking price. The bank may also issue loans to players. This is done when a player 'mortgages' the property. To do this the property must not have any buildings on any properties of that colour group. While the property is mortgaged, the property can no longer collect rent, and the player receives from the bank the amount specified on the deed. To un-mortgage the property, the player needs to repay the bank the amount of the mortgage, with a 10% interest.

Each property is named after a city location, depending on the edition of the game. For instance, if it is London, you can purchase places like Pall Mall, Kings Cross or Bond Street. When you purchase a property you will then receive from the Banker a card corresponding with the property and listing the rent fees. To collect rent on a property you must first land on it, and second, purchase it. This can be done by paying the upfront asking price, or at auction. Players can also gain property by trading with another player, or buying it directly from another player. The buying and selling of property must be completed during the player's turn and any trades between players must be negotiated during one of the two player's turns as well; this simply allows for fair play. If a player is forced into bankruptcy the player which holds the loser's debt gains all of his or her properties.

This is the only way to win the game. You can collect rent from any player that lands on any un-mortgaged properties that you hold in your possession. If you hold all the properties of one colour you have a monopoly. If you have a monopoly you can collect double rent on all un-mortgaged lots, and you can build houses and eventually hotels, represented by little plastic bulidings you place on your property. The construction of houses enables the player to charge more rent. Players should note that you are required to build equally on your monopolies. This simply means that you can't have one property with two houses if the other properties do not have any. The same rule applies while de-constructing, houses and hotels are sold back to the bank at 50% of the original cost. If one property has four houses the owner is then able to construct a hotel. With the construction of a hotel all houses on the property are removed. The hotel is the most development that a player can have on any given property. Some properties cannot be built upon, including the railways and utilities (ie, Water Work or Electric Company). These properties automatically collect more rent as similar properties are purchased.

The most important space on the board is Go. Each time you pass this space you are paid $200 by the bank. If you land on the spaces marked Chance and Community Chest, you follow instructions on the cards. If you land on the spaces marked Income Tax and Luxury Tax you are required to pay the bank the amount of taxes specified. Free Parking is a neutral space that cannot be owned, and does not cost the player any money if they land on it. The most feared space is Go to Jail. If you are unfortunate enough to land here, you are sent to Jail.

You can be sent to Jail by landing on the space marked Go to Jail, by rolling doubles three times in a row or by drawing a card that sends you to Jail. While you are in Jail you are still allowed to collect rent from other players and make trades. There are several ways to leave your cell. If you previously drew one of the 'get out of jail free' cards you may present it during your next turn, and continue around the board. You can also pay $50, or you could attempt to roll doubles. If you manage to roll doubles you are allowed to leave jail and travel the number of spaces shown on the dice. Unfortunately, if you do not manage to roll doubles you must wait until your next turn before you may pay your bail. The final way to leave Jail is to wait three turns, then you are free to leave.

Strategies for Winning the Game

There are basically three types of players in Monopoly. Each kind of player has their own strategy for playing Monopoly.

Many players prefer to purchase certain properties. The best investments are the railways. These four properties are a moderate price, and although they do not have the potential to earn as much as a property with a hotel built on it, railways will begin to repay you after the eighth time someone lands on it. If you are using the intermediary strategy these properties are a must-have item; not only are they cheap, but there are multiple cards in the decks that will send players to the railways.

The other set of properties that are often looked down upon are the utilities. This is simply because the return on the property is variable. It is recommended for players following the intermediary strategy to purchase these properties.

The colour groups that are the most valued (in order) by intermediary players are the orange, red, violet and yellow groups. These colours are desired for their placement on the board. If you notice, they receive the most traffic because they appear after Jail. Any player that is leaving Jail must cross this stretch of space. The jailbird has a very high chance of landing in the orange.

There are many different styles of game-play with Monopoly. Because the game can last for quite a long time, many people change the rules to decrease the duration of the game. The most common changes are:

1In the USA more Monopoly play money is manufactured each day than real money.2Someone trustworthy.