Tchaikovsky's Piano Concerto No 1 Content from the guide to life, the universe and everything 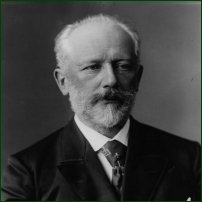 Inspired by the popular concertos of Mozart and Beethoven, Russian composer Piotr Ilich Tchaikovsky (1840 - 1893) began composing his first piano concerto in 1874. The full title is Piano Concerto No 1 in Bb minor, Opus 23. He originally dedicated it to Nikolai Rubinstein. When it was completed in February, 1875, he played the piece for Rubinstein.

Not one word was said - absolute silence... I got up from the piano. 'Well?' I said. Then a torrent burst from Rubinstein, my concerto was worthless and unplayable. Bad, trivial, vulgar, only one or two pages had any value.

So as you can see, Rubinstein didn't like it very much. He wanted Tchaikovsky to make significant changes, but was refused.

I shan't alter a note. I shall publish it as it stands.

Understandably, Tchaikovsky crossed out the dedicatee's name from the top of the page. He then rededicated it to Hans von Bülow1. Bülow said the piece was 'lofty, strong and original', and he learned and performed it on his American tour that upcoming autumn. He first played it in Boston on 25 October, which was the concerto's debut performance and was well-received. He later played it in New York City. Later on, Rubinstein changed his opinions about the piece and eventually learned and performed it himself.

The piece has three movements. The first movement is the most famous and recognisable.

Altogether, the piece lasts about 30 minutes. It was composed to be performed on one piano accompanied by an orchestra consisting of:

In 1958, Van Cliburn, a 23-year-old pianist from Kilgore, Texas, won first place in the first International Tchaikovsky Piano Competition in Moscow, Russia. He played Concerto No 1 along with Rachmaninoff's2 Piano Concerto No 2. He received an eight-minute standing ovation. He later performed Concerto No 1 at Carnegie Hall in New York City and was offered a record contract. His recording of Concerto No 1 was the first classical album to sell a million copies. Since then, Van Cliburn has performed for royalty, heads of state and every US president since Harry S Truman.

In the third series of the television show Monty Python's Flying Circus, there is a sketch titled Life of Tchaikovsky which is a fictionalised account of the composer's life. It ends with pianist Sviatoslav Richter (played by Terry Jones) performing Concerto No 1 while trapped inside a large bag.