Alternative Uses for Clothes Pegs Content from the guide to life, the universe and everything 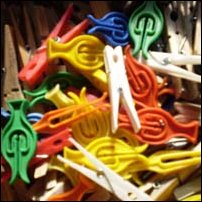 The conventional use of the clothes peg1, as the name suggests, is to hang clothes on a line to dry. However, over the years people have discovered some simple, ingenious and unusual uses for pegs.

There are many varieties of pegs, including the wooden gypsy peg, the dolly peg and the spring-loaded multi designs of the plastic peg, as well as the standard wooden spring-loaded and novelty animal-shaped pegs, with their mouths forming the clamp part of the peg.

One of the early known alternative uses for a peg is the peg doll. This is made from a dolly peg, one of the earlier types of wooden pegs. The dolly peg is carved out of a single piece of wood, with a split up the middle at one end, and a round knob at the other end, making it ideal for a head.

A simple way to make a peg doll is to wrap a lacy handkerchief around it, secured with an elastic band, draw a face on it, and then stick some small strands of wool to the top for the hair. More elaborate peg dolls take a bit more work.

If you're really clever, you could make one of a few different styles of doll-size rocking chair, made out of dismantled spring-loaded wooden pegs.

All of the following, unless stated otherwise, use the spring-loaded wooden or plastic pegs.

Use a couple of pegs to close the gap in drawn curtains that don't quite meet in the middle.

Pegs make ideal clamps to reseal any type of plastic bag. They can be used on bags of crisps or other potato snacks or to reseal bags in the fridge or freezer.

You can glue a tiny magnet to one side of a peg to make a fridge magnet paper clip; ideal for attaching unpaid bills and important appointments.

For tubes, such as toothpaste, turn the end over as you use it and use a peg to clamp it.

Need to keep your hair out of your face, but don't have any hair clips handy? A couple of pegs make useful, if not very flattering, hair clips.

A peg can be handy to keep your gloves together, when you're not wearing them.

A peg on your nose can prevent the nose senses from picking up objectionable smells, such as when changing a baby's nappy. It's a toss-up between whether you want to look daft, with a peg on your nose, or grin and bear the smell.

A home-made baby's mobile can be made with some pegs, string, coloured card or small colourful objects.

A bag of pegs, some coloured card or small pieces of material can be used to keep children amused. Though this is not recommended for children under three years of age.

Pegs can be used as cable-tidies to organise all those unsightly cables; although you need to take care not to damage the cables.

If you need something quick as a bookmark, you don't like folding the corner of a book, and happen to have a peg handy, it can be used as a bookmark. However, a peg is likely to do more damage to the book than folding a corner over.

Said to be popular in Germany is the home-made peg-line advent calendar. Consisting of 24 felt pockets, they each have a Christmassy motif sewn or glued to the top, and a sweet in each one pegged on to a line.

On the Notice Board

There are a multitude of uses for pegs on notice boards, most of which include another useful item: string.

Pegs attached to pieces of string may be pinned to the notice board for various uses. In colleges these include: the holding of plastic wallets for the depositing of return forms; information sheets clipped to the pegs; or a pen attached to the peg.

Having dinner in the garden? Clip a few pegs to the edge of the tablecloth as weights to hold it in place, so it doesn't flap about in your guests' faces.

Not got a safety barbecue lighter? Using a wooden peg to hold a match can give a few extra inches of safety between your fingers and the ignition point (plastic pegs can set on fire, give off noxious fumes and be difficult to put out).

Another way to amuse children by using pegs is the game 'Red Peggy', which is similar to an Easter egg hunt, and ideal for an outdoor children's party. Paint a few wooden pegs red, or use red plastic pegs. Secretly peg them around the garden, and then challenge the children to find them. You could have some small treats ready as prizes for the children that find the red pegs. Alternatively, use a peg in place of a thimble in the 'hunt the thimble' game.

Dolly pegs can be used as holders for plant identification tags, which aren't big enough to be driven very deep, and so get blown away in the first gust of wind.

Protect tender plants during the winter by making a bubble-wrap tepee. Using three garden canes placed in the ground in a circle, bind at the top, and wrap bubble-wrap around the canes and hold it together with a few pegs.

A couple of pegs and a piece of that very useful kitchen roll, and you've got a disposable bib for your baby. Be careful how you clip the kitchen roll to the baby's clothing; if they cry, you've pinched the skin.

Have difficulty finding your car in a large car park? Simply peg a piece of brightly coloured card, or some coloured ribbon to your car's aerial, and you have a homing beacon.

When packing the car with the beach towels and garden umbrella for a day at the beach, remember to pack a few pegs too. They have a couple of uses. You can use pegs to clip your umbrella to those of friends, so there are no gaps for the sun's strong rays to get through. Alternatively, peg a towel around the rim of the umbrella to make an igloo-shaped tent.

A peg can be used to replace the knob on an older car's manual choke.

Pegs are collector's items. Yes, it's true; people collect clothes pegs. Their proud owners have displayed collections of more than 300. One of the most sought-after types are the gypsy pegs made in the early 20th Century.

Pegs are ideal as mini-clamps in modelling hobbies, such as plastic Airfix-type, matchstick and lolly-stick modelling, where they can be used to hold bits of a model together while the glue dries, or to keep them in place while painting.

Photographers partaking in home film developing use pegs for hanging old-type film up to dry after developing as well as prints when they are drying.

An undignified, but feasible substitute for a nose clamp used in diving. The conventional diving nose clamp is a small metal spring-like contraption with two black round rubber pads to protect the nostrils. It is worn to prevent water being forced up your nostrils as you dive into the water.

Musicians use pegs to clip music sheets to music stands to prevent the wind from turning the page, or the music sheet from blowing away when playing outside.

Artists use pegs to suspend their brushes in oil to keep them supple, or when they are in a cleaning solution. The peg is balanced on the top of a jar holding the brush so that the brush end is in the fluid, but not touching the bottom, which could ruin the brush.

Another h2g2 Researcher reported an unusual contest she competed in, and won, in her younger days at a Butlins holiday camp. The idea was, using one hand only, to remove as many pegs as possible from a clothes line. The person who could hold the most pegs in one hand won. Our Researcher won with 16 pegs in her hand.

A couple of pegs are useful when putting a quilt cover on a quilt (also known as a duvet). Simply feed the quilt to the two furthest corners, secure them with a peg at each corner, pull the rest of the cover over the quilt, remove the pegs and give the quilt a good shake.

Ladies, do you have difficulty finding your matching sets of bras and briefs? Peg them together before putting them in the drawer; this cuts in half the time it takes you to get ready in an instant.

1Known as a clothes pin in the US.