Toilet Seats Content from the guide to life, the universe and everything 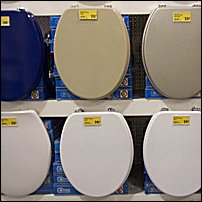 Going to the toilet is something many people take for granted. Indeed, you may feel a slight sensation in your bowels or bladder as you read this. Thus, as you enter the smallest room in the house, or any other bathroom, toilet or even dunny, you casually either sit down on the seat, or lift the aforementioned to perform your duty.

And there it is. The Toilet Seat. Easily forgotten, but a vital component in the overall human process of sanitary elimination.

The origins of the toilet itself are uncertain. From a mere hole dug in the ground, to the electronically aided, systematic flushing variety seen at the beginning of the 21st Century, toilets haven't really changed a huge amount. They are somewhere for humans to leave behind their effluence. Of course, with the advent of the toilet it became apparent that comfort was imperative when sitting on the 'throne' to do one's business. Especially for those who enjoyed not only the act of evacuation, but also that of cogitation!

As a result, toilet seats were produced. The first were not much more than a bit of wood with a hole in the middle, resembling a polo mint. However, as with any human invention, the design was improved upon and often a long plank of wood with as many holes in as there were members of the family, could be found in some outhouses. These changed in shape and material to the more ergonomic plastic toilet seat seen today, which is of an oval shape and sits neatly upon the toilet proper. Some have a secondary, oval shaped lid, but this is not a vital component.

Using a toilet seat is a fairly simple procedure, but is rather dependent on what you actually want to do. For the sake of good taste the correct terms will be used. 'Micturation', or urinating, and 'Defecation', or bowel movements, are the two most common processes for using a toilet and its seat. However, there are also different methods for the two sexes:

There are also cultural differences in the use of the toilet and its seat. In some parts of the world, particularly in Asia and Africa, it is not uncommon to find footprints upon the toilet seat. Many people will squat above the toilet, rather than sit upon the toilet seat, leaving dirty impressions of their shoes or bare feet.

While most humans are quite adept at using the toilet and its seat, other animals have been known to learn the fine art of toileting. Many domesticated cats, and even a few dogs, can, instead of doing what nature intended and 'going' outside, be trained to sit on the toilet seat and lay a 'miaowers' or 'barkers' egg4.

To Lift or Not To Lift

Should the toilet seat remain in an upright position at all times or should it be lowered? Some would say this is personal preference. Some would say it's not. But what are the pros and cons of leaving the seat up?

See? Contentious issue isn't it? Perhaps it's best you just go behind the tree out back...

Falling toilet seats have been known to cause genital injury to young boys whilst they stand close to the toilet and pass urine. In adults, bruising to the buttocks, or even spinal, hip or coccyx injury has occurred when a person has sat on a toilet without the seat being lowered. Some toilet seats can also work themselves loose on their moorings, and even the slightest movement can cause disastrous consequences. Other dangers the toilet seat may hide are redbacks, nasty little venomous spiders found in Australia that have been known to bite unsuspecting toilet users. So, look before you... leak.

There are simply dozens of styles of toilet seat available for the modern toilet, and they can be found produced from an amazing array of materials. There are some that have been produced from recycled paper into cardboard and others have even been made from carbon fibre or glass! But usually they come in the following;

The classic design of the toilet seat has altered over time to accommodate all walks of life;

Some toilet seats are a little more fancy than your average plain-black-plastic-crack-if-you-tilt-your-bum-cheeks variety;

While all the above styles of toilet seat are a fantastic array of the sublime to the almost ridiculous, it is the royal toilet seat that is by far the most impressive. Members of the English Royal Family, it is said, are entitled to a completely new toilet seat on any state visit. Whether it be a trip to the rugby or opening a new hospital wing, a fresh toilet seat is provided for the royal bottom in case one needs to attend to one's base functions. Other Royals and celebrities the world over have also been known to be provided with this incredible service.

It is a common misconception that you can catch a fascinating assortment of diseases from a toilet seat. Some of the more wondrous sexually transmitted infections are nothing to be worried about when you use a toilet and its seat. Honestly. But for those who are concerned, many public toilets now have toilet seat covers, which can also be purchased for home usage. These little oval-shaped paper 'napkins' sit on the toilet seat so you can rest your buttocks safely, without worrying that some nasty little bacteria or virus might climb into your lower intestine or genitalia, and cause you merry havoc.

If no paper napkin is available, you can simply wipe the toilet seat with a piece of toilet paper before use; or, if you have one handy, you can use a face or baby wipe. This is recommended as due course, especially in a public toilet. Not only does it remove any, unpleasantness, from the toilet seat, it also gives the seat time to cool down from the last user. There's nothing quite so unappealing as sitting down in someone else's warmth. And there's no shame in being sanitary, even Diana Ross insisted on having cellophane wrapped toilet seats before she even thought about doing a wee. But whatever your diva-like preference, be safe.

Put it down after you've used it.

1Got the picture?2If the seat is almost perpetually raised, it stands to reason you are visiting a male dominant household, such a bachelor 'pad' or student 'dive'.3Please note, not all men do this. Just 99.98% of them.4Do a poo.5These are plastic too, of course.6At least, they're meant to...