Polos - The Mint with the Hole Content from the guide to life, the universe and everything 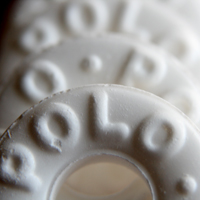 38 million Polos are produced everyday and more than 140 are consumed every second.

Polos are small round mints made by Nestlé1. They are pressed mints that come in a variety of flavours, such as Original and Spearmint. The name 'Polo' is reportedly from the word 'Polar' and is to symbolise the cool and fresh feeling one gets from sucking a Polo.

It all began a long, long time ago when Rowntree opened a tea and coffee shop in York in 1725. The Rowntree confectionery line gained popularity and in 1948 they launched the Polo Mint. It was similar to the Lifesavers2 that could be found in America and the British Navy Sweets but Rowntree attacked this problem with gusto and an aggressive marketing strategy and have since become known for their slogan and the shape of their mints, especially in the UK.

Polos have lasted through the years but in the meantime Rowntree underwent a couple of corporate changes. First, they merged with Mackintosh. Then in 1988 Nestlé bought them out.

Variations On The Theme

They are found in all major and minor newsagents, sweet shops, and supermarkets. Usually sold separately in tubes just about 10 cm tall containing 25 Polos, but can be found in multi-packs ranging from 3 to 6. The tube of Polos is tightly wrapped with silver foil backed plastic. A blue paper wrapper, with the word 'POLO', binds the foil wrapper. The O's in 'Polo' are the images of the sweet. For the spearmint flavour, the paper wrapper is a darker green.

A Polo is approximately 1.9cm in diameter, 0.4cm deep and has a 0.8cm wide hole. The original Polo is white in colour with a hole in the middle, and the word 'POLO' embossed on both sides3 around the ring – hence the popular slogan – The Mint with the Hole.

The ingredients include: sugar, glucose syrup, modified starch, stearic acid (of vegetable origin), and mint oils. They are usually sucked until they are thin and spindly and crushed under the eater's teeth.

In 1994 when the new Trade Marks Act was introduced in UK, Nestlé applied to register the shape of the Polo mint. The application featured a white, annular mint without any lettering. This application however was opposed by Kraft Food, the current owner of Lifesavers, and Mars UK because of the lack of distinctive character of the mint in question. Nestlé's application was allowed to proceed if it agreed to narrow the description of the mint i.e. the dimensions of the mint were limited to the standard dimensions of the Polo mint and that it was limited to 'mint flavoured compressed confectionery'.

Kraft Foods and Swizzels Matlow (owner of British Navy Sweets) have made similar applications for annular sweets bearing the mark LIFESAVERS or NAVY. Nestlé has tried to oppose these trademark applications but have failed as the court ruled that customers would be able to distinguish between a Polo, a Lifesaver and a British Navy mint as all of them have their marks boldly and prominently embossed on the mint.

When Polos are crushed in a darkened room, triboluminescence4 can be seen. This blue light5 is the result of friction between the sugar crystals when the Polos are broken. The sweet tends to crack or break along planes that are oppositely charged. When these positive and negative charges try to get back together, these charges 'jump' across the rift, like tiny lightning bolts.

1A recent advertisement claims that Polos are now 13.063% mintier.2Named so because they looked like miniature lifebelts.3Above and below the sweet.4Light triggered by a mechanical action such as friction.5Sucrose tends to emit a blue light.