Dunnies Content from the guide to life, the universe and everything 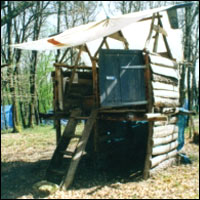 When we talk of a dunny1, a term of Australian slang, we are talking about a place similar to a toilet, lavatory, loo, smallest room in the house, or any other euphemism you care to name to describe the place where we ablaut. The dunny has come to most often mean an outside toilet, also known as an outhouse in some places. The word has its roots in the 17th Century, previously called dunnakin; from danna, meaning human ordure, and ken, meaning a place or house.

The dunny itself seems always to have been with us, in one form or another, and be it a longdrop, flaming fury or even a septic system, it's likely it will be with us for years to come due to its sheer usefulness. After all, in the middle of nowhere all you need is to dig a hole, stick some form of seat over it, and you have yourself a serviceable - if uncomfortable - dunny.

It has even reached the stage where dunnies are being heritage listed and are becoming a feature of historic tours. So even if the 'real thing' goes out of style, there will still be plenty of them around.

The History of the Toilet

It's unlikely we will find out who first decided to dig a hole to relieve themselves in. Presumably then, some person, tired of crouching over said hole on a cold, wet, windy day thought perhaps building some kind of structure around the hole, to keep the elements at bay, was a good idea. Then perhaps later, someone else, of a more laid-back nature, was tired with the whole 'crouching' thing in general and stuck a seat with a hole in it over the top and thus was born the first 'real' toilet. Toilet paper was most likely leaves, grasses and the like in the beginning. Eventually, after some bright spark invented paper, the pages from a book or newspaper were used, and then came purposely-made toilet paper.

Sanitation, on the other hand, can be traced a little more accurately. Possibly the first person who sat down and thought about sanitation with regard to the toilet, was the Abbot of Abingdon, in the County of Oxfordshire, in the UK. He apparently diverted water from a nearby stream to sanitize the toilet habits of his fellow monks. In fact leaders of monastic establishments were instrumental in promoting the use of water to cleanse, and the population was better for it.

The Romans, of course, had previously been well known for their own experiments in diverting various watercourses into troughs hewn from rock, where up to 20 men could relieve themselves at a time.

After the Romans, it seems, the concept of 'plumbing' disappeared for a while. For the rich, it became common to use a 'garderobe', which was a small room attached to the outside of a castle. The bottom of this was open to allow the ablutions to fall, and later some poor servant or other would have to remove the pile of waste.

For the poor it was more common to fill a chamberpot and then toss the results out the window into the street. In 1358 a royal writ commanding the Chancellor of London University to clean up the streets of London was issued. In Paris, the practice of emptying chamberpots out the window continued until it was outlawed in 1395. Curiously, despite the royal writ, the same law wasn't passed in Britain until 1750.

Having the 'luxury' of a chamberpot removed didn't mean ablutions stopped, it simply meant the results needed to be placed somewhere else. Enter the wooden commode. But, there was still the problem of what to do with the contents. Thus was born a new job title: the sanitation man. His job was to empty the full pans in the wee hours of the morning when it was less likely he would offend anyone's sensibilities.

Poor sanitation habits persisted worldwide until the late 19th Century, when it became popular for houses to have a proper earth, ash or water closet. Water closets were obviously preferable, but expensive, so most people had earth or ash closets. Developed urban sewage systems were not widely used until the early 20th Century, so for a long time the contents of interior earth or ash closets were deposited in cesspits and pools under houses, and stank to high heaven2, and it made sense to move the whole arrangement as far away from the house as possible.

Eventually, of course, plumbing, for those close to centres of civilisation, or septic systems, for those not, began to replace the various other methods of 'waste disposal' and in many cases the toilet could move back inside to become a much more respectable receptacle.

The simplest types of dunny are the pan and pit dunnies; both reasonably self-explanatory. The pan dunny has a pan under the seat to catch the 'doings', while the pit dunny has a pit or shaft dug under the seat. The pit dunny took a lot of work to set up, but the amount of time between when the pit is dug, and when it fills enough to require moving the dunny to a new pit is relatively long. On the other hand, the pan dunny basically requires only the building of the dunny 'shack' itself, which could also be made more permanent. The pan has to be emptied regularly, however, as there is a strong risk of 'overflow'.

A special type of pit dunny is known as the 'flaming fury'. It is built in such a way that when the pit grows too full, kerosene can be poured down into the pit and the whole lot burns. These usually have chimneys to siphon off the heat and gasses. It's interesting to note that many pit dunnies inadvertently become flaming furies, regardless of their original design, when some less than thoughtful person drops their cigarette butt down into the hole. Sometimes it goes out, at other times it sets the toilet paper alight which smolders for days. But sometimes that smolder worsens and the whole toilet can go up in flames3 or even explode.

To make a dunny you need only build a small shed with some kind of seat and either dig a large hole, or make a pan. The methods of doing each of these things can vary considerably.

The shed can be anything from a large, empty tree stump, to an old water-tank, to a neat, crafted, purpose-built hut. The seat can be something as simple as a board with a hole cut out of it through to a meticulously-crafted porcelain toilet seat. The pit can be a simple hole, though to a lovingly-dug shaft with the sides hand-laid with bricks.

In dunnies over pits the construction is often light so that the whole thing is easy to move. One design even puts the dunny on a sled to allow it to be even more easily moved. Dunnies with pans can be more solid, ornate and permanent.

One obvious nicety of the dunny is the introduction of toilet paper, but in many ways that is the least of the outside toilet owner's problems. Sanitation can still be a problem. Ashes are often dumped down the hole to help the contents to decompose. Another idea is to modify the lid of the seat to include a 'dripper' that is filled with disinfectant and, when closed, steadily drips the liquid onto the contents below.

Where to Put Your Dunny

The brief of 'up the back' leaves a dunny builder a great deal of scope for the actual placement and orientation of a dunny. With small yards and nosey neighbours some suburban builders have few choices, but out in the country many more choices are available to the discerning builder. Some are built facing east so the early morning user can 'sunbathe' - these are generally built with an inward facing door so it can be quickly kicked shut at the approach of another person. Some are built on hills, giving potential occupants a view to keep their minds occupied.

The Future of the Dunny

Where is the dunny headed from here? With more readily-available sewerage systems and, for the more remote places in Australia, affordable septic systems, the need for an outside dunny has declined, for the most part. Yet dunnies haven't completely lost their usefulness. In many National Parks the old pit-dunny has made a re-appearance; built at remote camping sites or hiking areas. They are cheap to make, require little maintenance, and are relatively 'safe' for the environment.

Again, in places like Lightning Ridge4 there are plenty of abandoned mineshafts just lying around, so it seems natural to use at least some of them as pits for dunnies. Really, anywhere that requires a dunny, but is out of reach of sewerage systems, or where cost or access prohibits a septic system, you'll still find a dunny.

Even if, under unforeseeable circumstances, no new dunnies are constructed, we would still be left with many fine examples dotting the landscape. Many quasi-government organisations in Australia are intent on preserving this reminder of Australia's past and listing the humble dunny, along with many other prominent buildings, on heritage listings.

1Also occasionally spelled dunnee.2London, evidently, was notorious for this problem.3Especially given the dried wood that is the hallmark of many constructions.4An opal-mining town.