The Proms That Nearly Weren't Content from the guide to life, the universe and everything 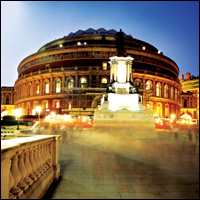 The Proms or Promenade Concerts are one of the greatest annual festivals of classical music anywhere in the world, and are unique. Every summer, from mid-July to mid-September, London's Royal Albert Hall plays host to a galaxy of the finest musicians on the planet. Each night for two months, seven days a week, orchestras, ensembles and solo performers play to packed audiences, and the BBC broadcasts the Proms live by radio to the UK and the rest of the world. A good number of the concerts are also broadcast live on television or recorded for later transmission, including of course the live transmission of the famous Last Night of the Proms concert.

The very first Prom took place in 1895, and the name of the conductor at that first concert, Henry Wood, later Sir Henry Wood, is inextricably linked to the Proms. In 1927, the BBC took on the role of organising the Proms, and apart from a brief period from 1939 to 1943 during WWII, has continued to do so to the present day. From its formation in 1930, one orchestra has been the mainstay of performance year after year – the BBC Symphony Orchestra. Sadly, what follows describes a singularly inglorious moment in the BBC's musical history.

A Plan is Laid

Early in 1980, after years of mounting budget deficits, the BBC set about a major cost-cutting programme that would see a total of 1,500 jobs go. These included 172 members from five of the 11 full-time in-house orchestras that the BBC was then maintaining in London, Glasgow, Belfast, Manchester, Cardiff and Birmingham:

It was these five orchestras that it proposed to disband as from 1 September, 1980, with the loss of 153 full-time and 19 part-time posts. The proposed saving to the BBC's Music Department would be half a million pounds a year. Although small, both in terms of the number of people affected and the financial saving, compared to the 1,500 people and the £130 million of the complete package, the reaction from the orchestras themselves, musicians in general and the public alike was not in the same proportion.

The Battle Line is Drawn

On 16 May, the Musicians' Union, of which the majority of the orchestras' players were members, voted to strike from 1 June, with 419 members voting for strike action and 81 against. Although it was still two months away, the strike threatened to affect the 86th season of Promenade Concerts, scheduled to begin on 18 July. The output of BBC's Radio 3 classical music station was the most seriously affected, although other areas of programming, including television variety shows, suffered as well. The BBC filled in on Radio 3 by broadcasting more recordings from its vast library of gramophone records, and with tapes of its own concert recordings.

The members of the BBC management who were, at least initially, in the front line of the dispute were Aubrey Singer, Managing Director of BBC Radio, Douglas Muggeridge, deputy Managing Director, and Robert Ponsonby, BBC Controller of Music. They would soon, however, be joined by Sir Ian Trethowen, the Director-General of the BBC. On 30 May the BBC made it clear that it would not allow the Proms to go ahead under the management of some other organisation. This was in reaction to an offer by a consortium, including independent radio stations, to put on an alternative series of concerts.

In the first week of June, the BBC Welsh Symphony Orchestra put on a free open-air concert in a Cardiff park, at which an audience of 1,000 gave the orchestra a standing ovation and, more importantly, a significant contribution to the orchestra's hardship fund.

With only a month to go before the Proms First Night, Aubrey Singer announced: We are not going to do the Proms at the sacrifice of not going through with our intentions.

On 24 May, in a letter to Sir Ian Trethowen, and in a letter to The Times newspaper published the following day, the renowned conductor Sir Adrian Boult proposed a compromise in which the Proms would go ahead, with the concerts being recorded but not broadcast. When the strike was over, the striking musicians would be paid and the concerts released for broadcast. Sir Ian said that while he recognised that the plan would have difficulties for both sides, he was willing to discuss it with the Musicians' Union. The union, however, rejected the plan saying that the scheme would clearly be strike-breaking. They further announced that at lunchtime on 25 May, the picket line outside Broadcasting House would be joined by musical heavyweights Malcolm Williamson, Master of the Queen's Music, Welsh baritone Sir Geraint Evans and conductor Sir Charles Groves.

On 26 and 27 June, the independent Advisory, Conciliation and Arbitration Service (ACAS) held talks, first with the BBC, then with the Musicians' Union, but concluded that joint talks would be pointless, as the gap between the parties was too wide. On 11 July, the BBC again met with ACAS, the outcome of which was a new proposal. This would involve casting adrift from the BBC a sixth orchestra, the 32-player Scottish Radio Orchestra, and creating a new one, the Scottish Sinfonia. This new orchestra would have 54 players, moved over from the BBC Scottish Symphony Orchestra, reducing the overall redundancy level by 22 players; the shed Scottish Radio Orchestra would be guaranteed engagements.

With only a week to go before the scheduled start of the season, the BBC was now obliged to post a notice in the press:

The BBC hopes that the Proms will take place as advertised. However, if the present dispute with the Musicians' Union is not resolved, cancellation of concerts will occur. The public is therefore asked to read the daily press or listen to Radio 3 for up-to-the-minute information.

On Tuesday of the final week, the BBC was forced to take the unprecedented decision to cancel the First Night of the Proms. If, as had been suggested early on in the strike period, that the Musicians' Union had been gambling that the BBC would back down at the last minute to save the Proms, the gamble had failed. The following day, the Saturday and Monday night concerts were also cancelled.

A petition carrying half a million signatures was delivered to Parliament. The situation was investigated by the Commons' Education, Science and Arts committee, who recommended1 that Lord Goodman, then Chairman of the Arts Council, should chair a joint meeting of the Arts Council, the BBC and representatives of the Musicians' Union. Sir Ian Trethowen's view, however, was that he would prefer to continue with the ACAS negotiations. The union, for their part, conceded that they would consider allowing the Proms to be recorded for later transmission, under certain circumstances. What those circumstances were was not made public.

Jack Brymer, principal clarinet of the BBC Symphony Orchestra, an internationally-renowned performer and a senior heavyweight on the British musical scene, perhaps spoke for many others when he objected not only to the idea of recording of the Proms during the strike, but also to the BBC continuing to broadcast previous recordings of striking musicians: Let the BBC leave those of us who wish to remain silent 'off the air' until a settlement has been reached, he wrote.

The players of the BBC Symphony Orchestra had arranged an alternative 'First Night' to be held at the Wembley Conference Centre, conducted by Sir Colin Davis. The audience in the two-thirds full hall included Master of the Queen's Music, Malcolm Williamson, alto Dame Janet Baker, Dame Evelyn Barbirolli, the widow of conductor Sir John Barbirolli and herself a renowned oboist, and composer Sir Lennox Berkeley. The programme consisted of Tchaikovsky's B flat minor Piano Concerto with pianist Cristina Ortiz, and Berlioz's Symphonie Fantastique.

While this alternative First Night was taking place, the BBC's Director-General Sir Ian Trethowen and Lord Goodman met for informal talks aimed at resolving the dispute. In the early hours of Thursday, 24 July, in talks chaired by Lord Goodman, an agreement was hammered out between the BBC and the Musicians' Union, subject to ratification by the union executive, and, if approved, by the members of the union. By Saturday, 2 August, the deal struck had been approved by the BBC orchestras, who voted 393 for, and 80 against, ending the strike. The deal saved three of the threatened orchestras: the BBC Scottish Symphony, the BBC Northern Ireland Orchestra and the London Studio Players, while the BBC Scottish, Northern and Midland Radio Orchestras would not be disbanded until the following Spring. It will be remembered that the BBC Scottish Radio Orchestra was not one of the five orchestras scheduled originally for closure, and probably accounted for most of the votes to continue the strike.

Nearly three weeks late, the BBC Promenade Concerts resumed on Thursday, 7 August. Twenty of the 57 scheduled concerts had been cancelled. That first concert, conducted by John Pritchard, began with Mahler's Fourth Symphony with Jessye Norman singing the alto part in the final movement, and, in the second half, French music by Messiaen, Berlioz and Ravel.

Never again has the BBC attempted to reduce its orchestral commitment.

1Their report was delivered by 4pm the same day, believed to be a record for a Select Committee.