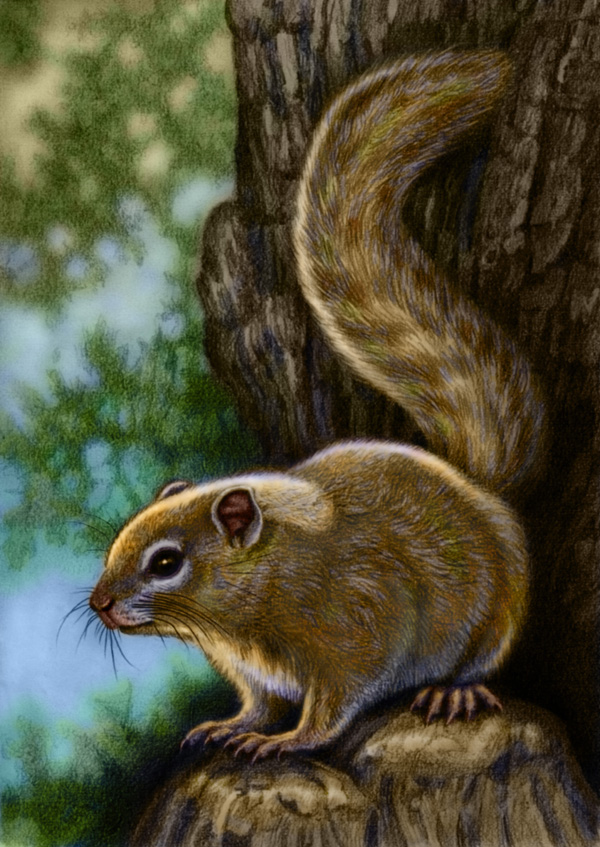 While South Africa has a very rich diversity of rodent species, for some reason we are not blessed with many species of squirrels. Indeed, there are only two you are likely to see anywhere in this country: the Cape Ground Squirrel, and this one. In the coastal forests of northern Kwazulu-Natal, you might glimpse the Red Bush Squirrel also, but it is very infrequently seen. So, this is the only tree squirrel most people will ever encounter here, and it has been simply called the Tree Squirrel here. But of course, in the rest of the world, and even in the rest of Africa, there are vast numbers of other tree squirrel species. A name used for it in the rest of Africa is Smith's Bush squirrel. It is also called the Yellow-footed Squirrel or the Mopane Squirrel, both not very appropriate since its feet are not really yellower than the rest of it, and it inhabits many kinds of woodlands that don't include Mopane trees. Its scientific name is Paraxerus cepapi. I don't know what 'cepapi' means, but 'Paraxerus' means 'beside Xerus', where 'Xerus' refers to a genus of ground squirrel. As you may read in my ground squirrel article, scientists reckon that ground squirrels may have first entered Africa, and subsequently diversified into lines that live both on the ground and in trees. If this is true, then the tree squirrels of Africa are not particularly closely related to the tree squirrels in the rest of the world.


This tree squirrel is found in dry, fairly open woodland country in the north of South Africa, and from there into Central and Eastern Africa, as far north as Tanzania. Towards equatorial Africa, squirrels suddenly become far more diverse, and a plethora of species are found there, including pygmy squirrels, rope squirrels, bush squirrels, sun squirrels, palm squirrels and giant squirrels. All of these are likely comparatively recently evolved, which is to say over the past ten million years or so. For comparison, the non-avian dinosaurs went extinct about 65 million years ago, which started the so-called Age of Mammals, more scientifically termed the Caenozoic. In a global context, squirrels evolved around fifty million years ago and have been amazingly successful, colonizing all continents except Australia and Antarctica. It is strange that they have not significantly diversified in South Africa, but the reason may be the dry and open nature of this country, with few forests or areas with big trees to be found.


Still, we are blessed to have this little squirrel, which is a dainty and delightful thing. It is small and rather thin in body, reaching about 35 cm/14" in overall length and 200 g/7 oz. in weight, with a sparsely-furred, wispy tail. It is easily seen in the places where it occurs; it is bold and inquisitive. It actually spends a lot of time on the ground, where it moves about in buoyant bounds, its little tail arcing behind it. When threatened, it flees up into the nearest tree. It will move around to keep the trunk and/or branches in between yourself and it, and it may scold you with chucking sounds. It also uses these chucks to mob predators like snakes, mongooses or cats, to show them that they are alert to them. The keener the threat, the more rapid the chucks, finally merging into a loud, rapid rattling. Synchronized with the chucks, they flick their tail over their body as well. When large birds-of-prey are spotted, they will whistle loudly and flee into the nearest tree hole. They're very agile and able to leap 2 m/7' from one tree to another.


These squirrels are fairly social. They're sometimes seen alone, but may also occur in small groups, likely based on a mated pair and their offspring. They recognize each other by smell, since they all share a tree hole to rest in, and groom each other regularly. They even anoint each other with a pungent excretion from glands on their bottoms. They feed together and share a small territory, which they mark with face-rubbing, urination and rubbing of their backside glands. The defense of this territory mostly falls on the adult males, and they will sometimes fight and bite intruding squirrels. Mostly, though, disputes are settled without violence. They're active by day, but will spend the hottest parts of summer days resting in the shade. But on cold winter days, they may bask in the sun for 2 hours or so, stretching themselves along branches and grooming themselves. They do this by licking, nibbling and scratching their fur. A mothers forcibly grooms her sometimes protesting youngsters, pinning them down with her forefeet.


South African tree squirrels are omnivorous and feed both in trees and on the ground. Of trees and shrubs they will eat seeds, fruits, leaves, shoots, bark, flowers and pollen; they furthermore add to their diet animal foods such as termites, ants, aphids and other invertebrates. They will venture out onto thin twigs or even dangle from their hind limbs to reach choice items. They will pick undigested thorn tree seeds out of the droppings of antelopes. They also eat the gum that exudes from damaged thorn tree bark, lichens, or fungi. On rare occasions, they may take and eat birds' eggs or even small nestlings.


Like other squirrels, these squirrels use their hands when they feed, holding a seed or whatever item and moving it around so they can nibble at it with their hard, strong front teeth. They typically have a specific spot where they take their food to eat, usually a high point from where they have a good view of potential predators. Below these feeding points small heaps of inedible bits will accumulate. They also will store extra food by burying it. They will have a few different caches dispersed through their territory; they try to hide these from their fellows, but these do sometimes manage to find and steal food from another's cache. Also, seeds left in a cache may germinate and grow, and the squirrels thereby are valuable in propagating trees and shrubs.


Being versatile, tree squirrels may breed at any time of the year, but mostly it happens during the rainy season when most food is available. The female indicates that she is ready by anxious calling; this may stimulate other females nearby to go into oestrus as well. Males will be drawn to her, even ones not from her group, and pursue her, making low growling sounds. Some males will try to chase away contenders, and the female herself will refuse and deter unsuitable suitors. For a male she accepts, she will stop, allowing him to groom her rump, after which he mounts her. After copulation they groom themselves.


Compared to similar-sized squirrels, South African tree squirrels have a long gestation period, of 53 to 57 days. One to three, typically two, pups are born per litter, in a hole in a tree which the mother lines with soft nesting material. They are blind and covered in sparse fur. Their mother suckles them from three pairs of nipples. She takes very good care of them, grooming them regularly and moving them outside from time to time to replace the nest's lining for good hygiene. At age eight days their eyes open and at nineteen to twenty days, they first start leaving the nest. They remain very close to their mother until they are weaned at the age of five weeks. Their father also stays close to them, and grooms them, but only their mother carries them. As soon as they leave the nest, their parents expect them to find food for themselves. They learn how to do this by watching their parents. This must actually be a lot of information they must take in, for instance to learn which seeds and which fungi are poisonous – and a great many are! At the age of ten months they are sexually mature. They may stay around and join the group, or leave to join a different one or start their own.


South African tree squirrels are at present abundant, widespread and adaptable, and not in danger of extinction.