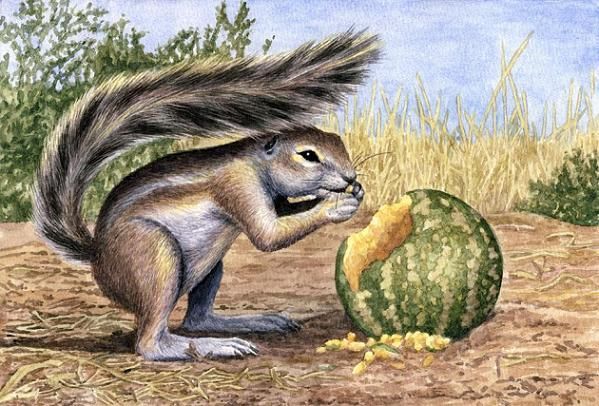 Here you see a Cape Ground Squirrel, Xerus inauris, eating a Tsamma Melon, Citrillus lanatus. This is South Africa's largest species of squirrel, reaching a length of 50 cm/20" and 1 kg/2.2 lbs in weight, and the only one that is ground-living. The melon occurs over much of the arid interior of the subcontinent, and is a wonderful source of moisture and nutrition for all sorts of animals.


This squirrel is quite unlike South Africa's other, tree-living squirrels, and some people don't know it is a squirrel! In Afrikaans we often call it a 'waaierstertmeerkat' or 'fan-tailed meerkat'. A meerkat is of course a species of mongoose that I've featured here already. Mongooses belong to the carnivore order, while squirrels are rodents, so there isn't really a close relationship. 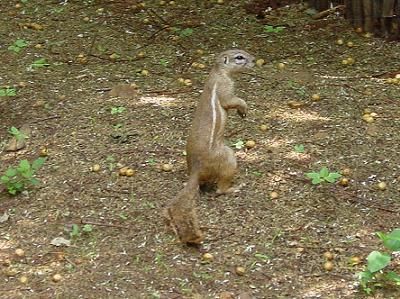 Many squirrels use their tails as screens against sun and rain. The Cape ground squirrel does it in a very conspicuous way. In the drylands of southern Africa, the sun and heat can be intense. This squirrel has the biggest and broadest tail of all … indeed, the tree squirrels here have thin and very wispy tails. Ground squirrels fan their tails and raise them high over their backs to shade them against the intense sun. They will turn their tails whichever way they face to keep their body in its shade.


But the two photos I include here show ground squirrels living in an atypical habitat! These were taken at the Bester Bird and Animal Zoo in Pretoria. I took my mum there while my dad was in hospital and we had a fun day. The squirrels were running loose on the grounds. Since Pretoria has a much moister climate, there were shady trees all over the zoo and the squirrels did not need to shade themselves, so they ran around with tails relaxed! This region is not part of the natural distribution of these squirrels; people took them there. I have seen these squirrels wild on farms in the Orange Free State, where the vegetation is fairly dry, open grassland. 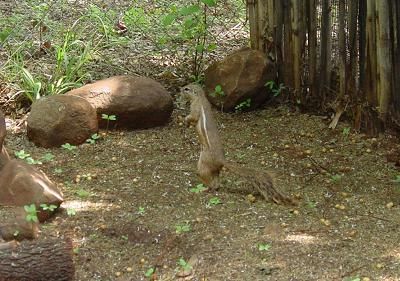 Another difference between the ground squirrels and the local tree squirrels is that they are gregarious, forming societies of up to 30 individuals. These are led by an alpha female rather than a male. The dominant males will often travel from one troop to another, only staying if they can find a willing alpha female in estrus. They live in large warrens dug in the soil. They therefore need soil that is loose enough to dig, but firm enough that their tunnels won't collapse. This sort of soil is fortunately found over much of the region. These squirrels are especially associated with the sandy Kalahari Desert (actually a dry savannah on deep sand). They avoid the looser sand regions, being able to dig better in more compact or gravelly sand such as at the edges of pans or the margins of seasonal rivers. The squirrels constantly excavate, and large mounds of soil pile up at the mouths of their burrows. Adaptations for their subterranean life are their long but not particularly strongly curved claws, and nostrils that they can close voluntarily so sand can't get in. They will use their strong jaws and sharp gnawing teeth to bite off the roots of trees they find in their way as they dig. Inside the burrows they will 'furnish' their rooms with a layer of dry grass on which they sleep, with their tails curled around their heads and bodies.


On winter nights, the desert gets surprisingly cold, and the squirrels will then huddle together for warmth. They will bask in the sun in the burrow entrance in the morning to warm up before setting out to forage. Sometimes they will bask stretched out flat on the ground outside the burrow. But even in the winter the days soon get hot and the tails go up again for sun protection! In the summer, the soil surface can become blisteringly hot, and not even the tail shade helps. Then they might lie stretched out in the shade of trees or shrubs to cool down. But it often gets so hot that this doesn't help any more either. Then the squirrels scurry back to the burrows, the interiors of which remain cool, and have an afternoon nap until it cools down a bit again on the outside.


While the squirrel troop forages, there will be always some who are alert and watching for predators. They have different calls to indicate different kinds of danger. The typical alarm call is a whistle or a scream, which sends all members running flat out for the burrow, their tails streaming behind them. Interestingly, the squirrels also react to the alarm calls of birds such as plovers. They also use the tail as a signal of danger, twitching it up and down – a motion that can be seen from far away. When the danger comes in the form of a snake, the squirrels will crouch down low, crawling over the ground and sweeping their tails sideways at the snake. This strange motion will apparently unnerve the snake and it will leave. A snake that enters one of the warrens will be a huge problem, especially if there are babies inside.


Most of the time the squirrels can forage in peace, and they interact with each other in many ways. Youngsters will play together, wrestling or chasing each other while making chirping sounds. The dominant female will often chase others away from a particularly nice food source or foraging area, growling at them. Troop members greet each other by touching their noses together. They will strengthen bonds by grooming each other. The squirrels also groom themselves, taking particularly good care of their tails. They sometimes take sand baths, covering themselves with sand and lying like that for a while before standing up and shaking off the sand. We still don't know just why they do that.


Another unusual thing is that these squirrels will often share their burrows with meerkats proper, or with yellow mongooses. These carnivores will be peaceful most of the time, sometimes even playing with the squirrels, but might very occasionally kill and eat a sick or injured individual.

Like many other desert animals, a big concern for a ground squirrel is getting enough moisture. It will therefore seek out the juiciest foods it can get. It is predominantly herbivorous, and because of its excellent digging ability, it will seek out subterranean roots, bulbs and tubers. These are indeed the plant parts that in the desert are adapted to store water, since deep down there is hardly any evaporation compared to the parts of the plants that stand above ground in the blistering sun. Bulbs and tubers are especially juicy after heavy spring or summer rains. Many of the desert plants try and protect themselves against digging mammals like the squirrels or others by having their water-storage parts very deep down … even this squirrel can't dig down for many meters. Other plants concentrate poisons in their bulbs or tubers. But the ground squirrel knows exactly what to target.


But often the squirrels cannot get the juicy bulbs they prefer. Then they have no choice but to eat what they can get, which most of the time is the tough, fibrous desert grass. They might eat the leaves and bark of trees and shrubs as well. They will take supplements like the juicy desert melons when they're available, or other fruits. They'll eat grass seeds and the seeds of other plants, and will also eat termites, especially the plump, winged males and females that emerge after good spring rains. They will also take grasshoppers, beetles, grubs and caterpillars.