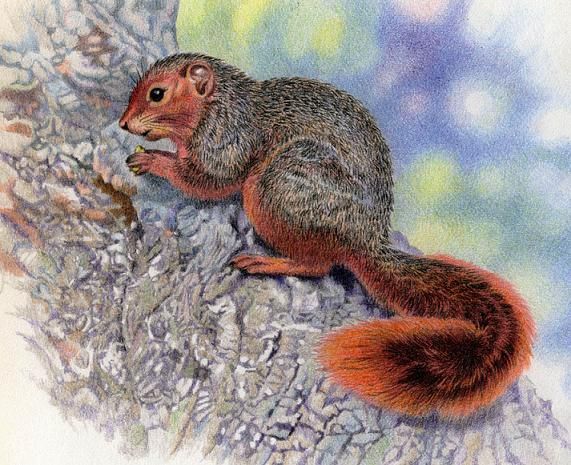 This squirrel is a completely different species from the red squirrel, Sciurus vulgaris, found in Europe and Asia. Its scientific name is Paraxerus palliatus and it is one of about eleven currently recognized species of bush squirrel found in Africa. Its range stretches along the eastern coast of Africa from Somalia to the northeast corner of South Africa. It lives in forests, mostly coastal and riverine, but a few populations are found in inland mountain forests. I've glimpsed it only once so far, while on holiday in the Lake Saint Lucia region. It is the rarest squirrel species in South Africa.


It can also fairly be called the prettiest native squirrel species in South Africa. Its fur is rich orange red below and on the tail, with a greyish, grizzled back. Its more common relative, Smith's Bush Squirrel Paraxerus cepapi (in South Africa simply called the tree squirrel), is smaller, yellowish in colour and with a very wispy tail. These are easily seen in many nature reserves. The red bush squirrel, however, is much more secretive and, living in dense forest and bush, not at all easy to glimpse. It can be located by its chucking and trilling alarm calls. These squirrels will sometimes 'mob' predators, calling attention to their presence. A predator who has been spotted and to whom its prey is attentive like this will usually give up. I'm not sure if these squirrels will mob humans like this as well… I haven't seen it myself or heard it being done with other people. The rarity of photographs of this species would seem to suggest that they don't, preferring to avoid people.


Red bush squirrels are somewhat variable, with differences in size, colour and luxuriousness of their coat. Those living on mountains are often larger, darker coloured, and with longer, denser fur. A number of subspecies have been named. The southernmost subspecies is the Ngoye Red Squirrel, Paraxerus palliatus ornatus. This one lives in the Ngoye Forest of northern Kwazulu-Natal. It is almost twice as heavy as the red squirrels living along the coast to the northeast. Another subspecies, Paraxerus palliatus vincenti (sometimes considered a full species), lives only on Mount Namuli in Mozambique. These two subspecies highlight the plight of a great many species, subspecies and populations of animals: they are restricted to small and vulnerable regions, making them very dependent on our conservation efforts. But another interesting thing is that these two places, Ngoye and Mount Namuli, are not only hosts for these localized subspecies of squirrels, but also have many other unique subspecies and species. So they are overall worth preserving for the uniqueness of the species living in them. Another principle in biodiversity is this: if a place has one unique species then it is likely to have others. Uniqueness usually means that a place or region has been isolated from others for a long period, allowing species to evolve separately and differently … and since ecology means species interact in so many ways and are dependent on each other in so many ways, what happens with one thing will always have an effect on other things.


Apart from colour, different populations of red bush squirrels also display different behavior. In Tongaland, northeastern Kwazulu-Natal, the red squirrels use mainly tail flicking to communicate with each other, since there is a lot of light in this low bush and the bright red fur stands out clearly amidst the green vegetation. But in tall, shady mountain forest the squirrels are not so easily visible to each other, and call to each other more. These forests are also more open in the understory. In the tall forests the squirrels move over larger ranges and tend to feed on larger fruits than in the lower coastal bush.


This species has not been studied much. In South Africa they are active by day. They are usually seen singly, but mothers can be accompanied by their offspring and occasionally by males. Large fruiting trees often constitute centres of activity. These squirrels make a great variety of sounds. Barks, chucks and trills are warning signals. Soft growls indicate that they wish to make contact with each other. The mother also growls to call her children to her. The male growls when pursuing the female or when he sees another male in his territory. When they are stressed they hiss or growl. Squirrels make clicking noises to indicate to predators that they are alert, the clicks increasing in frequently to a trill joined by many different squirrels when a predator is being mobbed. Babies in the nest make a ticking sound to get their mother's attention.


Like the tree squirrels of Eurasia and America these ones will also cache food, but only on a small scale, hiding a bit of food in small caches in hollows in or at the bases of trees or in the forks of branches. They eat mostly fruit, nuts and seeds, but will eat roots and bulbs, leaves and buds, and lichens as well. They also eat insects such as termites. They sometimes chase and attempt to steal food from each other. They will sometimes search for undigested seeds in baboon dung! By burrowing excess seeds – some of which they will eat later but some not – they help with the propagation of forest trees.


The African squirrels are an interesting bunch. Apart from the bush squirrels of the genus Paraxerus there are several other genera, such as the Sun Squirrels, the Palm Squirrels, the Rope Squirrels, the Giant Squirrels and the Pygmy Squirrel – the last being the smallest squirrel in the world, no larger than a house mouse. These tree squirrels apparently all belong to the Ground Squirrel subfamily, which in Europe, Asia and America include species such as the marmots, woodchucks and chipmunks. In Africa there are a few ground squirrels as well (the South African one hopefully coming to Colours of Wildlife soon) but there are many more species like these that are living in trees. Apparently squirrels are recent arrivals in Africa, and at first were of the ground-living kind – themselves probably descendants of tree-living forms – which in the African forests, savannahs and woodlands again became arboreal and diversified into many species.