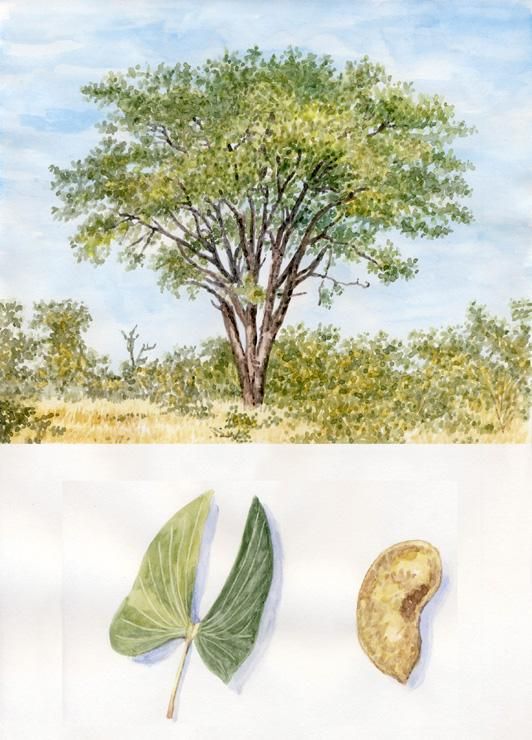 Today I show you a plant that is perhaps not as conventionally pretty as the flowers I featured in the last couple of installments. But the Mopane Tree, Colophospermum mopane, has a beauty of its own and is one of the most vitally ecologically important species on this continent. The entire tree has a resin that smells like turpentine, and its scientific name refers to that. The city of Colophon was the reputed birthplace of the Greek poet Homer, and was also famous for producing rosin, called Colophony, made from turpentine or the gum of other kinds of tree. ‘Spermum’ means seed, so the entire genus name means ‘Colophony-seed’. It is sometimes called a Turpentine Tree. The name ‘Mopane’ is what people in the north of South Africa call it – the name is similar in several different local languages. In Afrikaans it is a ‘Mopanie’.


Mopane Trees in fact form the dominant feature of a major kind of woodland category of Southern Africa. These Mopane woodlands are found from northern South Africa through Namibia, Botswana, Zimbabwe, Mozambique and countries further north as far as Malawi, Angola and Zambia. They are especially associated with the hot, dry valleys of major rivers like the Limpopo of South Africa and the Zambezi and Kunene rivers further north.


The Mopane can be a big and handsome tree exceeding 30 m/100 ft in height, but most of the time it is smaller. Indeed over some of its range it forms what should be called a shrubland rather than a woodland, the Mopane shrubs rarely exceeding 2 m/ about 7 ft in height. These are found on poor, shallow soils. But where the soil is deeper and more fertile they form substantial woodlands, sometimes called cathedral Mopane. All kinds of Mopane woodlands being typically in very hot and dry regions they are not very dense, not forming closed-canopy forests. Furthermore Mopane leaves fold up and hang straight down when the sun is overhead and the day is at its hottest, to minimize sun exposure, with the consequence that they cast very little shade. So these woodlands are open and sunny with a groundcover of grasses and shrubs. Still, the trees in them number in millions upon millions. Although the Mopanes dominate, there are many other species associated with these woodlands, most notably Baobab trees. Other trees frequently found in mopane woodland include species of thorn tree, Acacia, false thorn Albizia, corkwood Commiphora, bushwillow Combretum, and many more. The Messina Baobab Reserve, about two hours’ drive from where I live, contains a good sample of these woodlands, harbouring a variety of animals and fascinating plants.


My painting illustrates the growth form of this species as well as its leaves and pods. In the painting you see one growing as a tall tree … but around it you see low bushes and these are mainly also Mopane! When in leaf the species is very easy to identify: its leaves are in the shape of butterflies with two ‘wings’ connected at the centre. Very few other trees have similar twin leaves, and those that do have a different shape. Also when you crush these leaves they emit a smell of turpentine! Mopanes are in leaf only during the Spring and Summer, shedding them in the long, dry Winter – but they turn from yellow through orange to reddish brown in Autumn before they fall. Then they carpet the ground, making a dry crackling sound as you walk over them. In Winter Mopanes can still be recognized by their bark and growth form, but you’ll have to have familiarized yourself with their shape previously to give you the best chance of identifying them. On old trees the bark is dark greyish brown, rough, hard and split into longitudinal sections. On the shrubs the bark is thinner and less distinctive. Still, when you’re in Mopane country, they’ll be the majority of what you’re seeing. When spring comes again the trees and shrubs erupt in fresh new leaves, these also being a lovely reddish colour!


Mopanes are relatives of beans and peas. They are classified as Caesalpinioids, which either form a subfamily of the Pea family, the Fabaceae, or a separate but closely related family, the Caesalpiniaceae. This is a huge group containing many spectacularly large trees as well as plants with lovely flowers. Caesalpinioids are diverse in tropical rainforests all over the world. In South Africa they are particularly numerous in savannah, mostly as trees and shrubs, many of which are very distinctive. In Zimbabwe and other countries to the north of South Africa a second form of woodland called Miombo is characterised by another group of caesalpiniods, the genus Brachystegia. This is a moister and lusher kind of woodland compared to which the dry Mopane bush seems rather drab and sparse.


But Mopane woodlands are in fact rich in life. These trees, growing in dry places often on poor soils, are superbly adapted to make a lot out of these poor resources. In turn their leaves feed a great variety of browsing mammals from small antelopes up to elephants. They are also good food for cattle and goats. These must first learn not to mind the turpentine taste. It is said that if they’ve browsed on green Mopane leaves their breath will smell like onions! But the tree also produces nutritious pods after its Summer flowering. These dry pods look unappealing but, like other legumes, are rich in protein, and many animals eat them off the trees and bushes, or off the ground after they fall. 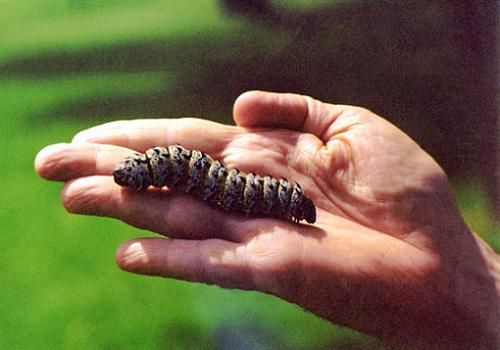 Perhaps most interesting about the Mopane is the fact that insects feeding on it in turn provide food sources for other critters. A kind of bug has a larva that lives on these trees; these small larvae exude a waxy covering that is rich in sugars, and baboons and other animals and even people seek these out and eat them. But the most sought-after item is the so-called Mopane Worm! These are actually not worms but caterpillars, the juvenile form of a large and handsome moth,Imbrasia belina. Mopane worms are big, fat and juicy, but unappealing-looking because of their spikey protrusions. I include a photo which is, as far as I know, this species or one closely related, which gives you an idea of their size and appearance. In many places in rural Africa people collect them off the Mopane bushes, then squeeze out their innards and let them dry in the sun; they can be eaten dry or roasted, or cooked into a stew with vegetables. They are rich in protein and as such a valuable resource for many poor people in its range. I must say, they aren’t exactly what I would call tasty! Lastly there is a small kind of bee that make their hives in hollows in Mopane trees; their honey is blackish and a locally sought-after delicacy.


Mopane wood also has many uses. It is very hard, heavy and tough, resistant to termites, reddish brown to almost black in colour, and widely used for constructing huts and cattle camps. They were used for railway sleepers in the past but unfortunately not enough big trees remain for that. Because of the hardness of the wood it is rarely used for finer work, but can be used for furniture or ornaments. An emerging modern use is for making woodwind instruments like clarinets, which produce a pleasant-sounding tone. They’re also used for highland bagpipes although the Scottish climate couldn’t be more different from that of their native lands! On the smallest scale of all, Mopane twigs are used as toothbrushes! First you chew on the tip of a twig until the wood fibres fan out like a brush, then you can brush your teeth with it. People DID brush their teeth before commercial toothbrushes were manufactured! Toothpaste is not necessary as the resin has anti-bacterial and anti-plaque properties.


But Mopane wood is also extremely valuable as a fuel source. Many, many communities in South Africa and our neighbor countries are still chiefly dependent on firewood, and the Mopane, numerous as it is, is the chief source of this. It is the most popular kind of firewood wherever it occurs, with Leadwood, Combretum imberbe and Camel Thorn, Acacia erioloba ranking just below it. It burns well even when green, gives off a pleasant smell due to the resin, and produces an intense heat and long-lasting coals. Gathering, selling and trading it is a substantial economic operation.


People living in the range of the Mopane tree have always recognized its importance and it has been honoured with many uses. The Herero people of Namibia use it for making sacred fires and for ceremonially removing teeth. After the teeth are extracted, Mopane leaves are applied to the wound to promote healing, the resin being astringent and perhaps antiseptic as noted above. Chewed leaves can be applied to other wounds as well to stop bleeding. An extract from the bark is used for tanning leather, and the fibrous inner bark for making ropes. A decoction of the bark is said to stop diarrhea, while a leaf infusion in turn combats constipation. Branches heated over a fire extrude a gum which is said to heal wounds that seem to be slow to mend. Lastly yet another insect feeding on it is useful … this time, a moth the caterpillars of which spin cocoons that are used as a source of silk-like fibres.


Mopanes are not easy to cultivate. They only grow in sunny, frost-free regions with long, dry winters. The seeds germinate unpredictably and the young plants are sensitive to fungal infections. Even if they survive the trees are slow-growing, needing decades to become substantial specimens. But I personally believe that growing them is worthwhile in regions suited to them. Certainly they add interest to game reserves and farms, and should be planted in groups in rest camps and around visitor huts; labeled tree specimens are very helpful to teach people to identify different species. Even when small their distinctive leaves, turpentine smell and attractive autumn and spring colours are striking. To grow them the seeds can be removed from the pods, or planted while still in them. Once germinated the seedling must not be overwatered which would cause it to rot. Seedlings must be transplanted very carefully to avoid damaging the roots. One benefit of the Mopane is that it is tolerant of poor, shallow, alkaline soils.