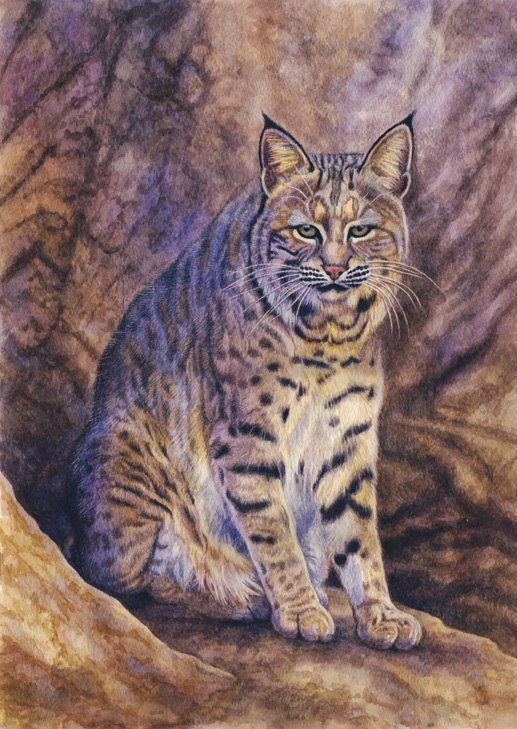 Something for you American folks for a change! I found a beautiful photo and got permission to use it, so I've painted this Bobcat, Lynx rufus. I love all cats of course, and wouldn't mind painting all the world's wild cats as well as a bunch of domestic cat breeds. But for today, here's the one you have. Bobcats are quintessentially American wild cats. They extend from northern Mexico through practically the whole of the USA into southern Canada. They've adapted to a vast range of different habitats, from deserts to forests, from swamps to mountains. They prefer wooded regions, or landscapes offering some other kind of shelter. Bobcats are variable in size, males reaching 60 cm/24" at the shoulder and a weight of 22 kg/50 lbs; but on average they're about 10 kg. They have short bob-tails, from which, along with their bobbing, rabbit-like gait, they've received their name. They're closely related to the larger Canadian Lynx, which also has longer ear tufts and proportionately bigger feet. All the lynxes have long cheek fur giving them the appearance of having whiskers. Lynxes and bobcats, unlike domestic cats, have round rather than slit-like pupils.


The one I painted here is typical in coloration, with a coat that is striped, blotched or spotted. The base colour of bobcat fur can be greyish or brownish, and in general those from deserts are lightest in colour, and those from forests darkest. There are some that are all-black like black panthers, but even in those, the pattern of darker spots, blotches or stripes can still be seen.

Cats are superbly adapted predators, and can be reckoned as some of the most 'modern' of mammal groups. But actually the lineage of the cat family goes far back into antiquity, and they were already as specialized and adept at predation many millions of years ago. Living cats fall roughly into one of two groups, the big cats such as lions, tigers, leopards and jaguars, and the small cats, which are the profusion of wild cats and lynxes of the world, as well as the cougar or puma, the largest of the small cats. Within the small cats, the bobcats and lynxes form a well-defined group that likely split off from its nearest relatives (leopard cats and typical wildcats) over three million years ago. (They've sometimes been believed to have an African relative, the caracal, which has a similar short tail and tufted ears, but genetic studies seem to show that caracals are more closely related to other African small cats like servals and golden cats, than to lynxes.) About two and a half million years ago, a lynx entered North America from Eurasia, its progeny moving from the north to the south of the new continent. About two million years ago, the ice ages started and glaciers in the north stranded the lynxes in the south. Separated from the Asian lynxes, they evolved into a new species – the bobcat! Later on more lynxes entered America from Asia, these ones evolving into the Canadian lynx. The two species are still genetically close enough that they can hybridize.


Reproductively, bobcats are typical cats. They're fairly promiscuous: males often mate with several females, and females can mate with several males. They're very noisy when mating, perhaps because like other cats the naughty bits of the males have spiky 'decorations' that cause the female physical pain. After mating the male goes off; the female carries and then gives birth to one to six kittens, which she raises alone. They remain well-hidden in the den at first, but start exploring their environment at the age of four weeks, and are weaned at about two months. They will then accompany their mother on her travels. She can have two litters in a year: the first in April or May, the next around September.


Whatever their habitat, bobcats are active mostly around dawn or around dusk and a bit into the night. They patrol territories, which they mark with urine or faeces. They do bury these by scratching soil or leaves over it. They also make visual marks by scratching the bark of trees. Their territories must be large enough to sustain enough prey, and also to include several places for retreat and shelter. The ranges of males often overlap those of others, but females tend to stick to their own turf.


Strong for its Size

Bobcats are much like other wildcats, noted for their ferocity. A big male can bring down a small to medium-sized deer or pronghorn! They're also considered as feeding on livestock and consequently persecuted by farmers. While a big bobcat is still not a serious threat to an adult cow or horse, they can kill sheep and anything smaller, even sometimes killing domestic cats and dogs. The limit of what a bobcat can bring down, seems to be an animal about eight times its own weight. A big deer is killed, quite quickly in the typical cat manner, by a bite to the throat or the base of the skull – or sometimes the chest. Such a big prey animal can't be eaten all at once, so the bobcat will eat as much as it can, and then bury the rest of the carcass under snow or leaves, to return to later.


Most of the time, bobcats go for much smaller prey. They mainly prey on rabbits, hares and rodents. They catch a variety of bird species, and will even fish, and go after large insects. They're ambush predators, either sitting hidden in one place and waiting for something to come close enough to pounce at, or they will slowly stalk intended prey through dense cover, coming as close as possible and then rushing out to grab it. They will also scavenge carcasses killed by other predators, and at least some of the reports of them killing livestock might be attributed to this. When nothing better is available, bobcats will hunt porcupines, but this is a dangerous game – porcupine quills lodged in their bodies might cause infection, and quills in their mouths can stop them from feeding entirely.


Also, bobcats themselves are often killed and eaten by predators – smaller predators for the kittens, larger predators such as wolves and cougars for the adults. In very harsh times, there's a small amount of cannibalism, adult male bobcats killing and eating kittens. But this is a relatively minor factor. Many bobcats are killed by humans, for 'pest control' or hunting. Still the species is so resilient that it seems to tolerate this attrition of its numbers. They can co-occur with humans, except in heavily farmed regions, and even enter suburbs.


Bobcats are still rather heavily hunted by humans, either for their fur or for 'sport'. I do wish we humans would start respecting the wild things more. These beautiful wild kittehs have a tough life as it is, and just because as a species they can rebound from mistreatment doesn't mean that it's all right for us to mistreat them as individuals. Nature itself will find the optimal numbers for bobcats, if we leave them be, and their presence as predators also benefit the ecosystems they find themselves in. For now there's little legislation to protect bobcats, and while it might not seem necessary now, we need to think of the future, and we also need to think about them as subjects to whom moral consideration is due for the simple reason that they have feelings and interests (I hope to write more about this philosophy basic to the concept of animal rights). They not only suffer from direct persecution but they are also severely impacted by accidents such as eating rats that have been poisoned by humans, which of course makes them very sick, causing them to suffer horribly or to die. Even if they survive, the poison weakens their immune systems leaving them vulnerable to mange, a horrible and disfiguring condition.


In addition to the ecological and intrinsic value bobcats have, they have cultural value, strongly figuring in Native American folklore, as well as tales from the first European settlers. A skeleton of an apparently domesticated bobcat has been found in an archaeological dig of a gravesite of the Hopewell Culture, along the Illinois River. This is an exceptional find, though, and seemingly overall these kittehs are just too wild to ever have been tamed completely.