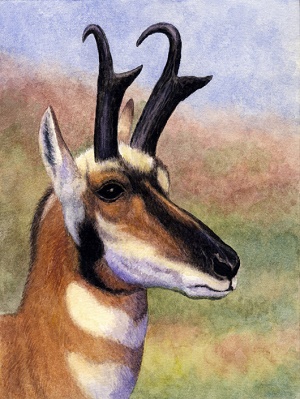 Something from America this time. Pronghorns, Antilocapra americana, are mammals of the open plains of the prairies and the dry west, occurring just marginally outside of the USA in south-western Canada and north-western Mexico. They're often called 'antelopes', as in 'where the deer and the antelope play'. Actually, they are the last survivors of a large family of hoofed, horned animals that are relatives of giraffes! Their scientific name means 'American goat-antelope' and so, like many scientific names, is not entirely fitting.

The giraffe family today includes giraffes – perhaps several species as genetic studies suggest – and Okapis. They occur only in Africa. In the past, there were a great variety of other giraffe species, in Africa as well as in Europe and Asia. Relatives of the giraffes were the families Climacoceridae and the Palaeomerycidae, which are extinct today. But also, one more family – the Antilocapridae! This is indeed the family to which the pronghorn belongs. It is the only other surviving family of the Giraffoidea. Pronghorns are only known from North America. There have been links between America and Eurasia in the past, meaning that the ancestors of pronghorns as well as giraffes were able to wander around the continents, but so far, the pronghorn family proper has not been found in Asia, Europe or Africa. They seem to have been a contingent endemic to the New World. Yet, they existed there for quite a long time, in a wonderful diversity. Even when humans reached America, there were several species, but all went extinct except for the one that survives. It is indeed likely that human hunting contributed to their extinction.


The pronghorn itself also almost didn't make it. When Europeans settled America, they hunted it intensively and also disturbed its native habitat, making it hard for the pronghorns to migrate as they need to between summer and winter feeding grounds, especially in the northern part of their range. Even erecting fences over the prairies had a negative impact. Pronghorns can run very well, but are poor jumpers, and even a relatively low fence will be a hindrance. But they do sometimes squeeze under a fence, and today, a measure of accommodating them, is to use an un-barbed lower wire on a fence, or leaving out the lower wire entirely. But thankfully there are now large nature reserves in the USA for them, and there are now almost a million of them. But there are threatened sub-species, including the Sonoran and Baja Californian pronghorns.


So, we at least still have this species … but we could have had three more, if we weren't so amazingly destructive!


Fastest Buck in the West

Another very noteworthy feature of pronghorns are their speed! It is difficult to determine the top speed of a wild animal, but pronghorns can run at about 90 km/h (55 mph) for a distance of 800 m/half a mile. They can thus outpace cheetahs, which can run slightly faster but only for a short distance. Pronghorns have the greatest speed-endurance of all running mammals, and can sustain 56 km/h (35 mph) for a distance of 4 miles/6.4 km. To give them this speed and endurance, pronghorns have large hearts, lungs and wind-pipes to help them get enough oxygen; cushioned hooves to absorb shock when running; and lightweight but sturdy bones.


What is interesting about this, is that this speed and endurance of the pronghorn by far exceeds that of any of its surviving natural predators. But there used to be one which could have caught pronghorns on the run: the American Cheetah, Miracinonyx. This was not a real cheetah, instead being quite closely related to the Cougar or Puma, Puma concolor. But it could likely run just about as fast as the cheetah, and thus could have preyed on pronghorns. Its extinction is likely also due to humans.


Today, apart from humans, pronghorns are still preyed on by a few species: wolves, coyotes, and cougars. These have to use ambush strategies to catch them! Golden eagles sometimes take young fawns.


Pronghorns have interesting social behaviour. In the winter they form large herds of males and females mixed; in summer, which is breeding season, new groups form: bachelor herds of young males; female herds; and independent adult males which roam around alone. The females establish a dominance hierarchy in their herds, the more dominant females having favoured access to feeding sites.


Male pronghorns attach themselves either to territories, or harems of females. In wetter regions, the males defend territories, rather than females, by marking them with scent and displaying to intimidate other males. Females in turn may be 'samplers' of males, moving through a slew of them; 'inciters' start as samplers but then incite the males to display or to fight, taking the winners. The males start with simple intimidation displays to sort out the biggest and meanest, only rarely actually fighting. Finally, some females stick with just one of the isolated males throughout the season.


Males court females with a gentle display, calling softly to them, and waving his head to show his black cheek patches. She'll sniff his scent glands, and if she accepts, will let him mount her. The one or two fawns are born after a gestation of 7-8 months. They reach sexual maturity at the age of 15-16 months, and can live for 10-15 years.