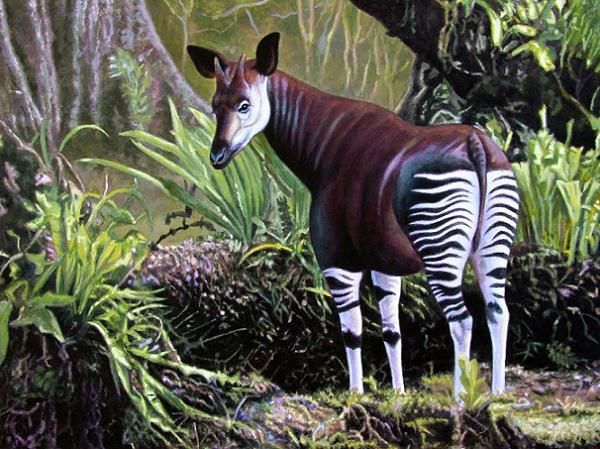 Today's article is about what to me is one of the loveliest mammal species in the world – the Okapi! This species, Okapia johnstoni, is one that not many people know about and even fewer understand. I've written a Guide Entry about it, which you can find here: Okapis. This article is more up-to-date and accurate than that one by the way.


In case you don't want to read that: this is in fact a species of giraffe, the only 'other' kind of giraffe apart from the one everyone knows. What makes it a giraffe? Everything! It shares an evolutionary history that goes back twenty million years or more. You can see it's a giraffe from its skull. Giraffes don't have horns or antlers, but simple outgrowths called ossicones. They start out covered with skin but the skin often rubs off the tips. Only male Okapis have ossicones. But the head and face is very giraffe-like. The nose is slender with a very mobile upper lip to pluck leaves, aided by a very long, muscular and prehensile tongue. Okapis can even lick clean their own ears – and this tongue extends the reach of the head and neck allowing it to pluck off nice and juicy leaves. Okapis have the same short, velvety hairs covering their noses, and very big, dark eyes. Although the Okapi's neck is not as long as a giraffe's, it is still comparatively long, and like the giraffe its back slopes down from its shoulders to its haunches, but not as much. The body is short, and the legs long. Just like giraffes Okapis walk by moving the front and back legs on each side of the body forward and backward together, instead of, as in most mammals, moving the front left and right rear leg forward together, and then the front right and left rear and so on. I include for you a sketch of an Okapi walking to show how it's done! This is so the long legs don't hit each other.


Another interesting thing is that the Okapi was only discovered comparatively recently – at the start of the Twentieth Century. Prior to that it had been known from stories told by locals, and finally from a skin. But at first it was believed to be a kind of forest donkey, zebra or horse. But tracks indicated by locals to have been made by okapis were of cloven-hoofed animals, ruling out horses! Finally a skull was found and it at last became clear that it was a kind of giraffe. The name 'Okapi' comes from the Lese language, and refers to strips of bark wound around arrow shafts and scorched to form stripey strips. This is of course similar to the stripes on the legs and hindquarters of the Okapi. 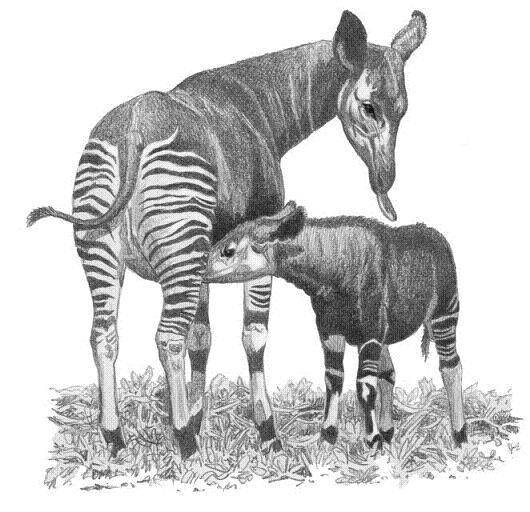 Some people would call an Okapi a 'living fossil', a survivor of a more primitive stage of the evolution of the giraffe, back when it still had a short neck. This is very inaccurate! Okapis are as well adapted to their environment and lifestyle as anything that lives today, and are still evolving and have evolved. Indeed it is difficult to work out just how closely related they are to giraffes, or just what stages they went through to evolve into their present form. It is a matter of 'bad luck' for want of a better term that we are stuck today with only two giraffe species, the better known of which has a long neck. A fairly short while ago, geologically speaking, there were many different giraffe species in the world; most lived in Europe or Asia rather than Africa, and most had short necks. So rather than seeing the Okapi as a 'primitive' giraffe, both of them can be seen as survivors of some kind of giraffe holocaust; if we had gone back in time to the heyday of the giraffes, we would have considered the long-necked giraffe as a rather aberrant specialized form, with the Okapi being seen as more representative of the family; we would perhaps have paid more attention to the huge short-necked giraffes such as the sivatheres and bramatheres. I portray some of these extinct giraffes in my article. There are many other kinds I also would like to portray, maybe in yet another article.


One reason for why Okapis are not better known is because they live in a rather inaccessible region of rainforest in the Democratic Republic of the Congo. Even today not many scientists go there, and new species are discovered around the region with regularity. The Okapi perhaps occurred more widely in the past; they are and have been hunted, and perhaps are a fairly easy quarry for hunters skilled in tracking, and are sometimes trapped in pits. Today Okapis are protected but this is difficult to enforce due to the wild nature of the region, and also the seemingly neverending Congo civil war. They are therefore still not much studied. But there are increasing numbers of them in zoos around the world. The make some of the most beautiful zoo attractions! I am always more in favour of conserving animals in their natural habitat rather than captivity, but with the volatile nature of the region where Okapis occur, captive breeding projects can make a contribution to safeguarding the species. 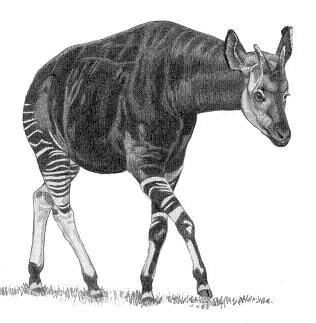 What exactly is the function of the Okapi's stripes? Zebra stripes have always been considered as a way to trick the eyes of predators. When many zebras are together in a herd, one sees a dazzling confusion of stripes and it is almost impossible to pick out an individual animal. But okapis don't live in herds. In the rainforest, sunlight coming through the canopy will throw patterns of light and dark. But really pondering the Okapi, its colour pattern does not much resemble dappled shade. If you look at my painting you'll see that actually the hind quarters of an Okapi stands out very conspicuously! I therefore think that display is a more likely reason. Also it is speculated that baby Okapis can follow their mothers through the dark forest more easily thanks to the very bold black and white pattern on her butt! Speaking of babies, Okapi babies are extremely pretty! They're a bit fuzzier than the adults, including a chocolate-brown mane along their necks, which is gradually lost as they mature. 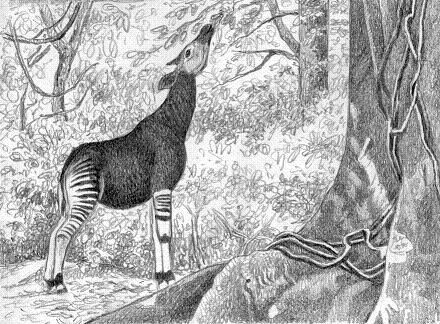 In their habitat Okapis don't have much to fear from anything except for humans. They are quite large, reaching from 200 kg/440 lbs to 350 kg/770 lbs in bodyweight. Apart from the forest elephant, only forest buffaloes and bongos (a kind of antelope) rival them in size. They are also the tallest of the browsing mammals of the forest. Only leopards prey on them, and then mainly on babies.


A final interesting fact about Okapis is that they lick clay, bat droppings and charcoal from trees struck by lightning. They must get some kinds of minerals from these that they can't get from their regular leafy greens!