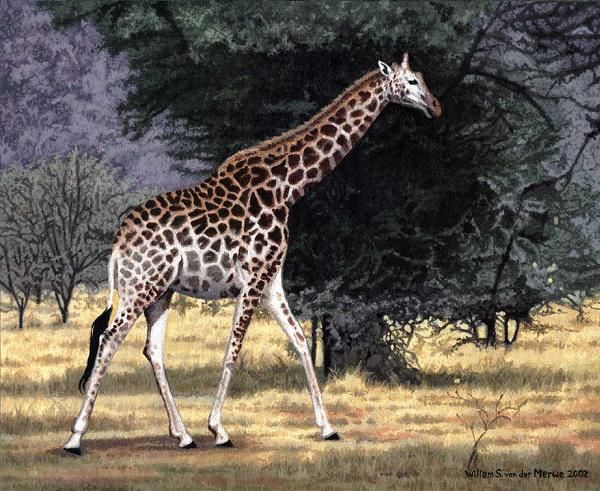 Today I have a bonanza for you: a two–page, six–picture entry about giraffes! Giraffes are certainly among my all–time favourite mammals. The first page will be about modern giraffes, and the second page will feature extinct giraffes.


I’ve already written an Edited Entry about giraffes; here it is:

In that link you can read a lot of facts about giraffes. . . if you need even more information, there's an exhaustive entry on Wikipedia:Giraffe . So instead of more facts, I'll use this article for personal impressions and views.


I am very fortunate in living in a region where there are plenty of giraffes. They can be easily seen in our local municipal game reserve here in Pietersburg/Polokwane, and then there are also populations in several reserves not far from here, such as the Potgietersrus/Mokopane Game Breeding Centre, the Messina Baobab Reserve, and the Turfloop Nature Reserve. Indeed every decent–sized game reserve and many game farms in the Bushveld and Lowveld regions in South Africa would have some. They are also among the easiest of animals to see. In the open, sparse savannah and woodland where they occur, their size and height make them very conspicuous. Also they are usually not very afraid of humans. They are very rarely hunted, and their only natural predators are lions, which do not occur in most of the smaller nature reserves. Thus, they are frequently tame and relaxed and can be approached fairly closely. Consequently I have managed to take many good photographs of them. The two paintings here were both done from my own photographs, and the face sketch is from a photograph taken by one of my cousins, Jaco Bekker. 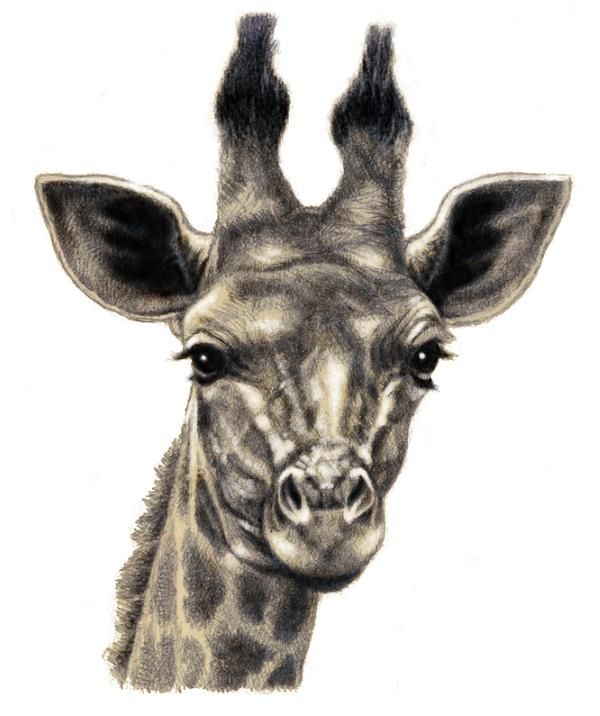 Even before coming to Pietersburg I was fascinated by giraffes. I was born in Pretoria and lived there until I was eight years old. My father encouraged my love of animals and nature and I still fondly remember our trips to the Transvaal Museum, where there's a mounted giraffe head and neck, and the Pretoria Zoo, where there are several living giraffes in a large enclosure. Much later, when I was studying at the University of Pretoria, I again took a trip to the Zoo, on foot. . . from the hostel where I was staying it was a walk of several hours there and back. That was in addition to all the walking at the Zoo itself, which is quite a large complex, and ascending a good part of a hillside. So the trip was rather exhausting all told, but I still enjoyed it very much. And the highlight of the trip was when I visited the giraffe camp. The front of the camp is designed for viewing visitors, the back not: there's a high wall and gate which the zookeepers use for entry. I saw from a distance a giraffe standing there. . . maybe waiting for food. So I walked around to the back, and it was a young female giraffe. And she was very friendly! She bent her head down to me and let me stroke her nose. Up close I could admire her incredible size and beauty. Her bright black eyes were the size of apples, her entire head at least as long as my outstretched arm. Her warm breath blew out of her nostrils with an audible whooshing sound. The fur of her nose was dense and soft like velvet. All in all it was an incredible encounter.


Another nice encounter was when I was taking a couple of German girls sight–seeing. They were exchange students, the University of the North having had an agreement with some German universities. The two girls wanted to see some wildlife, and I took them to the Turfloop Nature Reserve which is associated with the University. It is not a very developed reserve, not having good roads. Much of the trip we were really roughing it, sometimes where there were no visible roads at all, driving through tall grass and thorny trees and shrubs that would scrape against the side of the car with that awful kind of screech, like nails down a blackboard, that would set your teeth on edge. But in the end it paid off, because we did encounter an entire herd (or maybe the word is 'journey') of giraffes! We admired them for a long time, and I took many photos. Here's one showing eight of them. . . the entire herd was a bit bigger than that, but it is still the largest number of giraffes I've been able to fit into a single photo:

I have been privileged by many other encounters. Special elements of encounters include seeing little giraffe calves. They are very cute, with small horns with fuzzy tips. Their horns are soft and lie flat while they're in the womb, so that they don't hurt their moms. The horns then come erect after birth. Another interesting thing to see is a very big and old bull giraffe. Their spots and coats keep darkening so that by this point they could be almost black! Such old bulls are nearly always on their own, the typical herds (or journeys) being composed of younger animals. A final very special thing to see is a giraffe running. They look like they're doing it in slow motion! Actually they are moving quite fast, but it only looks slow because they are so large and their legs so long. 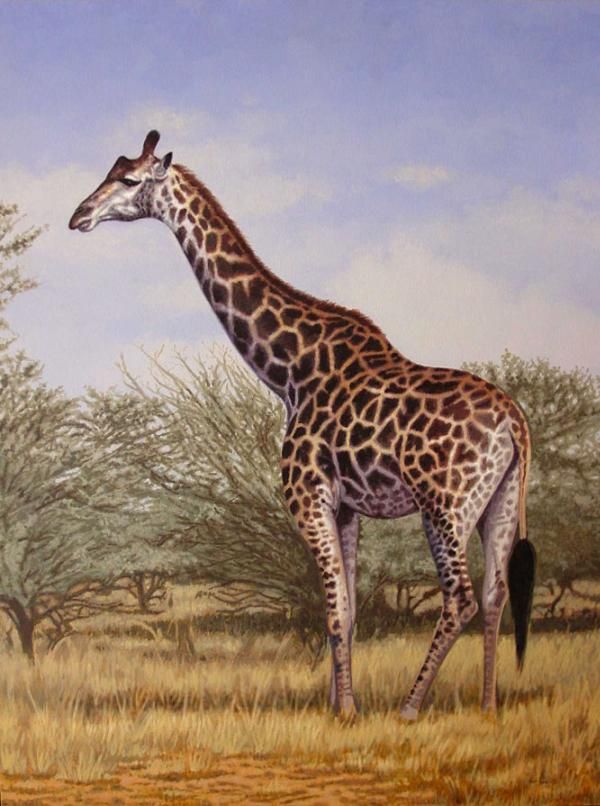 A last thing I'd like to mention about giraffes: there is currently a lot of talk about their genetic diversity. Some studies now suggest that instead of just a single species, we should recognize perhaps from six to nine different giraffe species! It turns out that the different populations in Africa are separated into groups that rarely interact or interbreed. There is significant variation in their coat patterns, with for instance the Reticulated Giraffe of East Africa having large chestnut–coloured patches very neatly separated by thin white lines, while the Maasai Giraffe, which lives nearby, having veryirregular star–shaped patches. Every one of these different groups of giraffes has its own characteristic genetic composition. Whether they deserve recognition as full species, or whether they should just be termed sub–species, is not important, as in any case they represent unique 'units' of biodiversity. Two of them are currently severely threatened, numbering only a couple of hundred or so animals each: the West African Giraffe, and the Rothschild Giraffe. Obviously these need to be targeted by special conservation measures.


I must mention as well the other kind of living, modern giraffe, the Okapi. I've not yet any paintings or photos; in fact I have not yet seen a living one. I do hope to cover it for Colours of Wildlife sometime; until then, there's my entry.