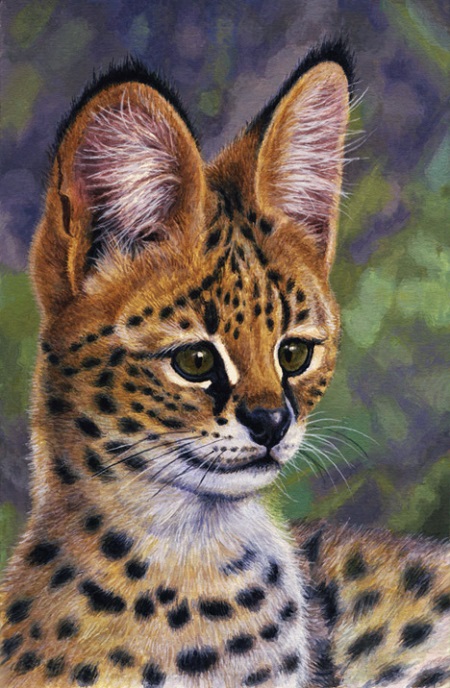 If you thought the previous kitteh, the Caracal had big ears, then check out this one! This is a Serval cat, Leptailurus serval. Indeed, I've portrayed here a youngster, which has ears proportionally larger than the adults, but not much. You can also see its inquisitive look, pricking its ears – perhaps it's heard something scurrying up ahead! Servals indeed use these huge ears of theirs for hunting. And the rest of them aren't shabby either. They're certainly on my list of ultimate felines – and I'm a feline fan, considering the entire cat family pretty awesome! In Afrikaans we call them 'tierboskatte' or 'tiger bush cats'. The English name is derived from the Portuguese 'lobo-cerval', which is actually the name of the Eurasian Lynx, which is not a particularly close relative. The scientific genus name Leptailurus means 'light/slender cat'.


Servals are the second-largest of Africa's small cats, being just a bit smaller than the caracal, weighing up to 18 kg/40 lbs. But they have longer legs and stand taller, reaching 60 cm/24" or more at the shoulder. They have short, black-ringed tails, reaching only down to their heels when hanging straight down. Their ears have bold black and white markings on the back surfaces, used in signalling. They have black spots on their warm-yellow coats, which join together on their necks, backs and sometimes on their sides and limbs, into bold black stripes running lengthwise on the back and sides but (if present) crosswise on the limbs. There is also a form with very fine spots or freckles – this is not a different species or even a race or sub-species, but a colour form that can even occur in one or more of a litter of otherwise normally-spotted kittens. These are mainly found in equatorial regions. In East Africa, and especially around the tall mountains, black servals are found. They're melanistic morphs, similar to the 'black panthers' which are melanistic leopards. Again, they're not different species but just colour forms of the same species. Even in cats, colour is pretty much only skin deep.


Tall Stalkers of the Moist Grasslands

Servals occur all over sub-Saharan Africa, as well as in North Africa in Morocco, Algeria and perhaps Tunisia, in regions with tall grass. They're especially fond of grasslands that are moist for most of the year, such as grassy marshes and other wetlands. They also occur in reed-beds and rank vegetation at the edges of forests. Here they hunt the numerous small critters seeking out this verdant vegetation offering year-round food. They're particularly partial to rodents – especially the stout and chubby rats we call 'Vlei Rats', that is to say marsh rats. These can be extremely abundant in suitably lush and dense grassland or marshland.


These small critters have an advantage in this tall grassland: being small themselves and scurrying around at ground level, they're almost impossible to see! This is why the serval has evolved its huge ears: these enable it to hear the scurrying rodents, even though it can't see them. So the serval will pinpoint the location of the blissfully ignorant marsh rat from some distance away, and then stalk it with silent, feline stealth. It can start its pounce from a distance of several yards away, launching itself high into the air and coming down almost straight from above on its (hopefully) mightily-surprised quarry! When it lands, it will try to stun the rat with a blow from one or more paws. If the rat survives the pounce, a rapid bite to the neck will kill it. Still, sometimes the prey can escape – indeed, only about half of a serval's pounces are successful.


Servals typically hunt alone, from dusk till dawn. Sometimes couples hunt together, and they sometimes hunt on dark, misty or cloudy days. They walk at a stiff pace and can cover large areas in each night's hunting. They tend to patrol their own established trackways. They even enter flooded, marshy regions with a depth of water of up to 8 cm/3.5". They don't feed on larger critters than rodents up to the size of cane rats, or hares. They do catch some birds, and are able to deftly snatch them out of the air like caracals. They can also extract rodents or birds from burrows or hollows using their long limbs and dextrous paws. They also eat a variety of reptiles, frogs, even some fish and insects, and on occasion will eat fruits. But they overwhelmingly prey on mice and rats. This, and their preying on seed-eating birds, actually makes them valuable for grain farming. Thus it is especially tragic that they often perish as a result of indiscriminate predator-killing by farmers. They don't kill or eat more than they need. If they're satiated before having eaten an entire prey item, they will hide the left-overs in a cache and return to eat it later. But they eat only their own left-overs; they'll not scavenge carcases killed by something else. They'll neatly pluck birds before eating them, and also tend to not eat the entrails of their prey.


While African wild cats, the ancestors of domestic kittehs, bury their droppings just as well-behaved domestic cats do, servals leave theirs out in the open. These large scats full of coarse rodent hair betray the presence of a serval in a specific region. Servals don't occupy exclusive territories, but a single adult will have a region within which it is quite active itself, and its droppings and urine communicate this to other adult servals by sight and scent. The others will then avoid this region – unless it's an adult of the opposite sex seeking a partner! When rival servals do meet, they try to look taller, standing on tip-toe, or perform a high-bounding display to each other. They also display by raising and lowering their heads. They growl, snarl, hiss and spit when angry, and purr when content.


There is no fixed breeding season for servals, but mostly it happens towards the end of summer. The female delivers her one to four kittens not in a den, but at ground level in a spot sheltered by tall grass or shrubs. She will suckle them, later bringing prey like birds or mice to them. Their ears start out small but grow amazingly fast. At one year they become independent, but females may remain with the mother for a while longer, while the males are chased off. These young adults wander around for some time before managing to find suitable territories. They reach sexual maturity at the age of two years, and can live to the age of twenty.

Servals themselves are very wild kittehs, but can become reasonably tame if reared from a very young age, and some people do indeed keep them as pets. However, there is a kind of cat breed called a 'savannah cat' which actually is a cross between a serval and a domestic cat! Savannah cats are large and extremely beautifully spotted, and retain some of the wildness of their ancestors. They are demanding cats to keep, but those who have them consider it worth their while. The cat breed called the Bengal cat also is a hybrid with a wild parent, but this time using an Asian leopard cat crossed with a domestic cat. These, too, are beautifully spotted felines.


Unfortunately, wild servals are in a bit of trouble. They are persecuted by some farmers, but much worse for them is the farming itself. While they can still survive where there is some cultivation and the land is not altered too much, where there is wholesale destruction of the natural vegetation, they can't adapt. Much of the tall, moist grassland in South Africa and elsewhere in Africa has been turned to intensive farming, including timber plantations, which completely exclude servals and their prey; even grassland that is maintained, often becomes overgrazed by livestock, which means there's no tall grass left for the servals. They also fall prey to domestic dogs, and thus decline in regions where many humans live. They're sometimes killed for their beautiful spotted coats. While not in immediate danger of extinction, they are indeed dependent on human conservation efforts for their continued existence.