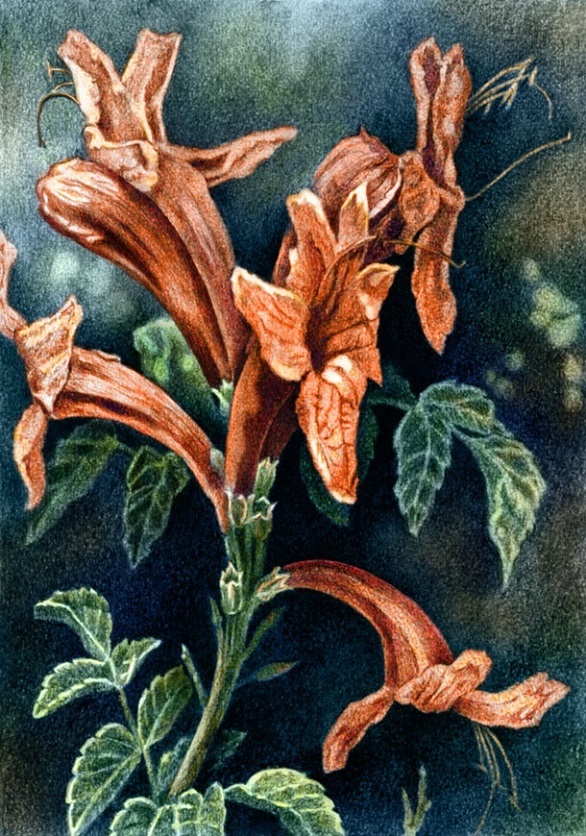 This time I have for you another beautiful flower. This is the Cape Honeysuckle, Tecoma capensis. It is sometimes placed in its own genus, Tecomaria. The plant usually grows as a vigorous, scrambling shrub, but can be a free-standing, small tree reaching 5 m/17' in height. This species is in the Bignoniaceae, the same family as the Sausage Tree, the Port St Johns Creeper and the Karoo Gold. It is not a true honeysuckle. Common names for plants rarely reflect their relationships … people tend to call them whatever comes to mind. Not even scientific names are much help, since these change frequently. Plants are so variable, that it is often difficult to figure out what is really related to what.


In South Africa, this species is found in the warmer, moister regions from the Western Cape through the Eastern Cape, Kwazulu-Natal, Mpumalanga and Limpopo provinces. From there it occurs northward to Tanzania. The Cape Honeysuckle grows in scrub, on the edges of forests, or on riverbanks in woodland, on various kinds of soil. The long, scrambling branches bear beautiful, glossy, compound leaves. In a climate that is hot and humid year-round, they are evergreen, but will lose their leaves in cold and/or dry winters.


This species can flower for a long period, mainly from June to November (winter to summer here in South Africa), but flowers might be found any time of the year. The flowers vary in colour from yellow to red, and are about 5-7.5 cm/2"-3" in length. Their sweet nectar is popular with sunbirds, starlings, orioles and other birds. They also attract bees and butterflies. In addition, a few butterflies will lay eggs on the honeysuckle's leaves – which provide food for their caterpillars! The insects will attract insect-eating birds, and some birds like making their nests amidst the dense branches.


In the bush, many species of game will browse honeysuckle leaves: kudu, nyala, bushbuck, klipspringer and more. Humans use a decoction of the leaves to treat diarrhoea and bowel inflammation, while the powdered bark is used medicinally to relieve pain and fever, treat bleeding gums, and induce sleep.

This is a wonderful plant for a wildlife garden. Because of its vigour, it should be given enough room for best effect. It can be planted in a bush clump, as a screen or windbreak, or hedge. If a smaller, neater specimen is desired, it can be pruned. Pruning will stimulate new growth and flowering. It is surprisingly robust. Although it grows in moist and warm climates in sheltered places in the wild, this species can tolerate light frost (when mature), moderate drought, and windy conditions. In my own garden, it grows rampantly in spite of getting no care or extra watering apart from the yearly summer rainfall (average 500 mm/20" in Polokwane). You can plant it in full sun or shade – in the latter case, it will send out long shoots towards the sun. This plant will thrive in warm regions of the world, but be careful about growing it in small, sensitive islands such as the Azores, where this species might invade the unique local flora.


This species can be grown from seed. The pods that follow the flowers are long and narrow, splitting to release the papery, winged seeds. In nature, these are distributed by the wind. It is best to remove the wing from the seeds by rubbing them between your fingers prior to sowing. Sow the seeds on a well-draining soil mixture and cover in a thin layer of sand. Keep moist. Germination is best in spring or summer. Plant the seedlings out individually once they've formed two proper leaves. Protect them against frost for the first two years. The plants grow fairly rapidly, and can flower in their second year.


The Cape honeysuckle can also be grown from cuttings. These work from new shoots or from shoots a year or two old. Take cuttings of about 10 cm/4" in length. Remove all leaves except for the two at the tips, and insert the base of the cutting in clean sand. Keep it moist and spray it with a fine mist once or twice each day. Another, easier way is to remove rooted suckers. These can be induced to form: take a branch close to the base, bend it down to the ground level, and cover it with soil, or hold it down with a rock. Within a few weeks, it will have formed roots. Then you can detach this rooted section and grow it into a new plant.