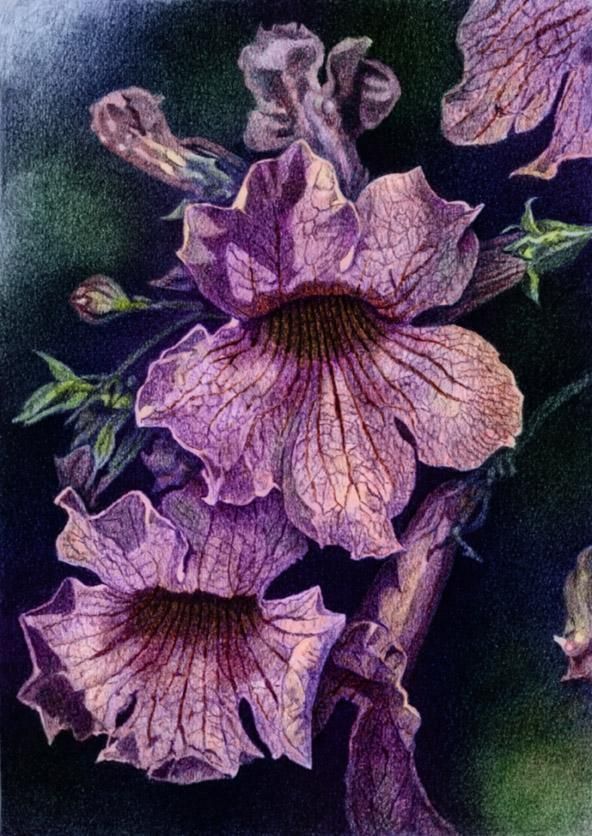 This beautiful flowering plant is called the Port St Johns Creeper, Podranea ricasoliana. Port St Johns is a town in the Eastern Cape province of South Africa, in what used to be called the country of Transkei, intended to become an independent country during Apartheid times. The region has long been set aside by treaties, white people declaring that they would not settle there and allowing the Xhosa people to retain the territory. The Port St Johns Creeper only grows wild in a small area in this region, around the mouth of the Mzimvubu river. It occurs much more widely in cultivation than in nature.


This species' genus name,Podranea, is an anagram of the name of a similar species from Australia, Pandorea, which in turn has been named for Pandora the all-gifted woman from Greek mythology. Apart from the Port St Johns Creeper, there is just one other species in the genus, the Zimbabwe Creeper, Podranea brycei, which is found far away in a small region of Zimbabwe and Mozambique. This species is very similar to the Port St Johns Creeper, and sometimes included in it.


There is more to this story than meets the eye, though. This creeper has been cultivated so much over such a large region for so long, that it is not entirely beyond doubt that the natural populations growing here in South Africa are indeed the original natural ones. It has been claimed that they might have been introduced here long ago by slave traders operating around the east coast of Africa. Their real home might be somewhere else. Its original population may also be small and hidden somewhere in Africa or maybe even Asia … or may indeed be extinct.


A Family of Beautiful Flowers

This creeper is a member of the Bignoniaceae family. This family is most prevalent in tropical regions and contains many trees, vines and shrubs with beautiful flowers. The Sausage Tree with its large deep-red flowers is a member, as is the Jacaranda tree, originally from South America but now planted in masses in South Africa, giving beautiful displays of purple flowers in cities like Pretoria and also my own town of Polokwane. Other beautiful indigenous flowers in the family here in South Africa include the Cape Honeysuckle and the shrubs and small trees of the genus Rhigozum.

The Port St Johns Creeper is a vigorous plant. In nature, it grows in coastal and riverine bush and forest in a moist, subtropical climate. Growing along the sunny edges of the forest, they scramble over trees and shrubs and the vines can reach a length of over 10 m/33'. Because of the warm and moist climate, these vines are evergreen. They don't climb by means of tendrils, as many other climbers do, but by sending out rapidly lengthening, arching shoots that drape themselves over whatever support they can get. Their foliage, not shown in my picture, is very attractive as well, the leaves being pinnately compound (arranged like the feathers of a bird's wing), glossy and luxuriant. The trumpet-shaped, pink flowers are born in masses at the tips of the shoots. Flowering persists throughout the entire summer. The flowers attract big, fuzzy carpenter bees as pollinators. They're followed by the flat pods, which release the seeds with their papery 'wings'. Drifting in the wind, the seeds take their chances of landing in a favourable spot to germinate.

A caution is in order. In regions with a very favourable climate, this species can grow like a weed and become almost impossible to control. It can therefore be an invasive species and threaten native plants and ecosystems. It is thus best grown here in South Africa where it is indigenous, or in other countries in unfavorable climates where it needs just a bit of help from humans. Being from a subtropical climate, it dies back in regions that experience cold winters. However, if the winter is not too cold, its roots will survive and send up new vines in the next spring and summer. It grows outdoors in the USA in regions that include California, Texas, Arizona, Florida, Louisiana, Nevada and South Carolina. It flourishes as well in Southern Europe. In regions that are colder still, it can survive in hothouses. It will need regular pruning back to prevent it from taking over the entire hothouse!


There are many ways to use this creeper in the garden. It can cover walls or grow over verandahs, or be allowed to scramble up a BIG garden tree (it might overwhelm a small one) or in a bush clump along with other strong scrambling plants. If you wish it to climb up supports, you need to tie the branches to these since it lacks tendrils. It can also be planted in a large pot and pruned to keep it neat. It enjoys full sun and rich, fertile, well-draining soil. It prefers lots of water in summer but moderate watering in winter. Established plants can survive moderate drought periods. Be prepared to prune it back regularly.


This plant can be grown from seeds, but seed production and fertility can be erratic. Seeds should be sown in well-draining soil and only covered in a thin layer. Keep them moist in a warm but shady place; germination should happen in a month or so. It is easier to grow this species from cuttings or layers. Plants in gardens will form roots wherever the branches touch the ground. These rooted sections can be snipped off and planted in bags or elsewhere to propagate the plants. You can make layers by staking down branches, bending the tips upward and putting some soil over the branch just behind the bend; roots will tend to form at the bend, and then you can remove the rooted section. You can also take cuttings from branches that are a season or two old; these should be rooted in conditions similar to that for germinating seeds.