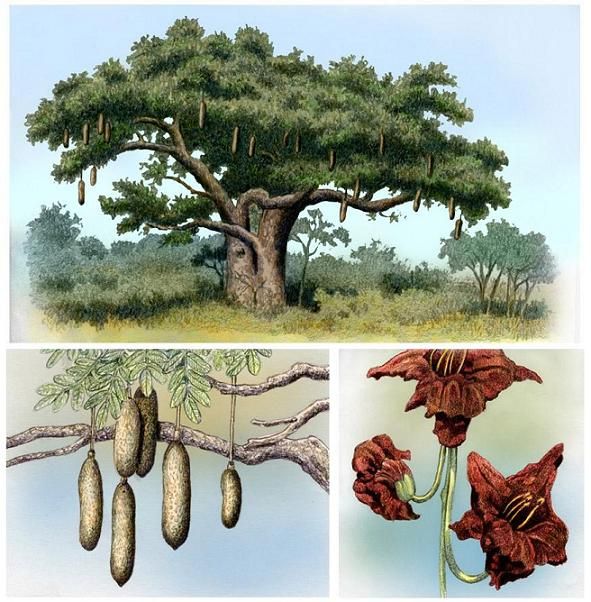 A tree again, yet another weird one, but one with very beautiful flowers! This is the Sausage Tree, Kigelia africana. Yes, really, this tree exists! It grows from north eastern South Africa northwards as far as Tanzania. Over here it is especially associated with the warm, low-lying savannah of the Lowveld such as found in the Kruger National Park. Most of the time it grows on riverbanks where the roots have access to water year-round. It can often be identified from far away by its size and shape. It reaches 25 m/83' in height. It usually spreads wider than it grows tall, and its trunk can grow very stout. It is one of the more imposing of the riverside tree species, along with wild figs.

Of course this tree is most easily identifiable when it bears its diagnostic fruits! These look like immense sausages hanging from the tree on long strings. Each sausage can reach a meter/yard in length and weigh 10 kg/22 lbs. Unfortunately they are not as tasty as they look! They're rather hard with a tough rind. Though inedible to humans, some animals eat them: bushpigs, rhinos, porcupines, baboons and perhaps others. I've seen a photo of a kudu sucking on half a sausage fruit, probably to extract moisture from it. Unripe fruit are toxic, and there's apparently a bit of poison in the ripe fruits as well. Still, humans use them: unripe fruits are used medicinally for rheumatism and syphilis, while the ripe fruits are baked and the pulp added to beer to aid its fermentation. Powdered pulp is used for making dressings for sores and ulcers, while an extract of the pulp is used for skin and sun protection ointments. The fruit as well as the bark, ground up and boiled, are used for children's stomach complaints.


In the wild, most of the fruit end up on the ground where they decompose and release the seeds. These are edible after roasting in warm ash, but apparently they are mostly eaten in times of famine.


The sausages are even used magically! They can be dried out and hung in people's homes where they are considered a charm offering protection against whirlwinds. But even for people who don't believe that, the dried fruits can be used as ornaments and conversation pieces.

The sausage tree is also renowned for its fabulous flowers. These hang down from long stalks (the same ones that later become the strings for the sausages) and are quite large, reaching 15 cm/6" in diameter at their mouths. They are deep red and have soft, velvety appearance. The crinkly petals tend to fold backwards around the tube. They have a rather unpleasant aroma, and are pollinated by bats! These land on the large flowers and shove their heads, or sometimes their entire bodies, into the tubes to get access to the nectar, in the process getting dusted on the head and body by the long, curved stamens. The flowers are short-lived. The buds open at night, and the flowers fall off the next day. They're quickly replaced by more flowers, so that trees can be seen in flower over the course of the flowering season, which is in early spring.


One critter has found a way to cheat the flowers! Sunbirds, instead of climbing into the flower's throat to get the nectar, sit on the outside and pierce the base of the flower tube with their sharp beaks, and then drink the nectar. In the process, those flowers don't get pollinated! But luckily there will be enough other pollinators active, and the trees certainly do get pollinated judging by how many sausages they produce. Monkeys also drink the nectar. Monkeys and baboons will also eat the flowers themselves, and fallen flowers are eaten by lots of antelopes and other animals.


Value to the Ecology


Apart from everything that eats the fruit and flowers of these trees, there are many more things that eat their leaves. For protection, young trees tend to have leaves with coarse, spiny margins. But in adult trees these smooth out, the margin being wavy at most. Kudus and elephants have been recorded eating the leaves. Because of its size, the sausage tree provides welcome shade for many animals at the hottest time of day. The canopy provides shelter and nesting sites for birds, and the large bole sometimes has cavities big enough for large hole-nesting birds like hornbills.

Before I tell you how to grow these trees, a caution! I've seen it here in Polokwane: these trees are being planted in PARKING LOTS of all places! While this may be all right while they're small, imagine what will happen once they're large. Imagine a yard-long, twenty-pound, hard-shelled 'sausage' falling from a height of 30 ft or more onto a car! In fact these sausages are even potentially dangerous to people, though I've so far not heard any accounts of someone being hit by one. (There are many people who've been injured or even killed by falling coconuts, but coconuts are much more abundant than these trees and also occur on beaches where many people tend to think it's a nice idea to lounge about underneath them.) So … they should not be planted in parking lots or other places where they can damage property. Good places for them are city parks (with falling sausage warnings), LARGE gardens (with guests appropriately cautioned) or perhaps best of all farms and nature reserves. There they can be planted on the banks of rivers, lakes and ponds, for their beauty, shade and attraction of wildlife.


Also, they should not be planted in unfavourable climates. Growing in hot savannah, they are not cold resistant. If young trees are protected, they can in fact grow in regions experiencing moderate frosts, such as Johannesburg and the colder parts of Pretoria. In these regions the trees will be deciduous, losing their leaves in the winter. They can also survive a short winter drought in leafless form. In more favourable climates, they will have only a brief period of shedding their leaves at the very end of winter or start of spring, growing a fresh, new crop of leaves almost immediately.


But given enough room and a favourable climate, sausage trees grow fast and well. The seeds are fairly large and germinate readily. Plant them in spring in pure river sand, just pressing the seeds into the sand until they're flush with the surface, and then sprinkle a thin layer of sand on top. Keep moist. They should germinate in anywhere from ten days to a month. The seedlings can be transplanted into individual bags once at the two-proper-leaves-stage. A good soil mix is a well-draining one with a moderate amount of compost. This tree can also grow from cuttings. Cut the tips of twigs and remove all leaves except for the last pair at the tip. Use pure river sand for striking the cuttings. Sausage trees growing in good conditions can increase their height by 1 m/yard a year. In a large garden they can be expected to reach a height of 10 m/33'.