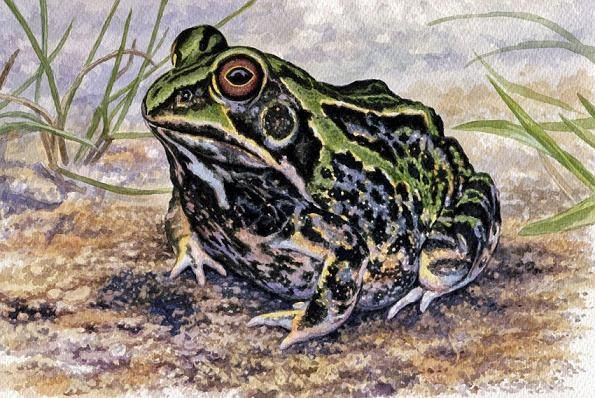 Time to feature another froggie! This is the Ornate Frog, Hildebrandtia ornata. It is named for its conspicuous ornamentation: most of them have bold black bands and blotches decorating their backs, with lighter, mottled bellies. Actually this is another species of frog that is extremely variable. The ground colour can be green, reddish, brown or golden-yellow; some of them are very pale, with a creamy or whitish ground with brown blotches. These colour variations can occur in the same population; ornate frogs can change colour as they grow older.


Ornate frogs are rarely seen and not much is known about them. They spend most of their lives underground, in a kind of torpor. They only come out during warm, rainy weather. Since they live in the savannah regions of sub-Saharan Africa, this happens in the spring and summer, which is also when they breed. The male ornate frog has two separate vocal sacs, one at each corner of his mouth. When not in use they withdraw into a pair of slits just below the frog's jawline. The call of the courting male is a short, rather nasal quack, repeated frequently and for very long periods. Calling males are extremely hard to find … they probably call from inside burrows at or close to the edge of a seasonal pond or pool. (They've also been found breeding in temporary rock pools on top of the small, isolated rocky hills we call 'koppies'.) When a receptive female approaches, the male comes out and grasps her under the armpits, a move particular to amphibians which is called 'amplexus'. The male frog develops hard ridges on his forelimbs, called nuptial pads, to hold her more securely. She will lay her eggs into the water, and he fertilizes them as they come out. This frog lays its eggs singly and widely scattered, rather than in clumps or in strings like some other toads and frogs do.


Young ornate frogs are somewhat more slender than adults. Adult frogs are pudgy and compact, quite toad-like in form. Nevertheless, they are true frogs, either classified in the river frog family or in the grass frog family. They can be confused with young bullfrogs but most of the time their markings are bolder. In particular, ornate frogs have a distinctive pair of whitish, Y-shaped stripes down the length of their throats. They reach a snout-to-vent length of about 65 mm/2.5". The squat body shape is typical of frogs that bury themselves in the ground. They often make their burrows under logs or stones. When the rainy season starts, they come out and eat to prepare for breeding. The adult frogs are predatory and will catch invertebrates as well as smaller frogs. They particularly like the winged male and female termites, called alates, that also emerge to breed at these times. When confronted, ornate frogs will puff their bodies up and lift themselves high on their legs to appear as large as possible. These frogs are apparently not particularly poisonous, since there are African rural peoples that regularly eat them. Despite this, they are not endangered, and have a very wide distribution in sub-Saharan Africa.