Colours of Wildlife: The Sharp-nosed Grass Frog: A World-class Leaper 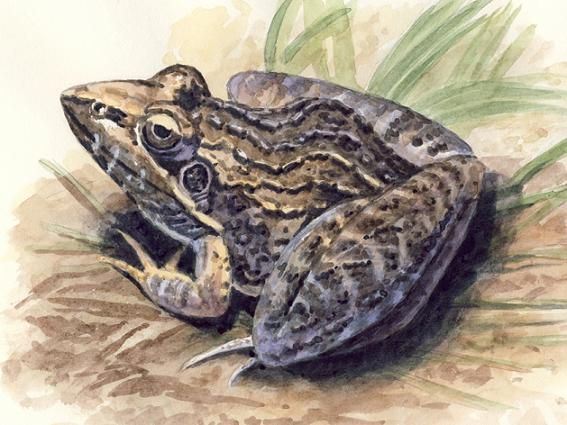 Mark Twain wrote his story 'The Celebrated Jumping Frog of Calaveras County' in the eighteen sixties … here is the entire text.

Inspired by this tale, an actual frog-jumping contest has become a tradition in Calaveras County. The rules state that a frog has to make three consecutive jumps, and the total distance is measured. The 'record' that – last time I checked the 'net, which happens to be a few minutes prior to writing this – still stands, is 6,6 metres (about 22 ft) set by an American Bullfrog called Rosie the Ribiter. But the truth is that this record has been substantially exceeded by a South African frog. And it so happens that one such frog, specially imported from South Africa, has made an attempt at a record at the very same contest, almost succeeding … as a result of which the rules were changed to stave off any possible future upsets.

The frog in question was a Sharp-Nosed Grass Frog, Ptychadena oxyrhynchus. This species is widespread in the savannah regions of Africa, only avoiding rainforests, deserts, and cooler climates. It is an excellent athlete … if you look at the picture, you'll see that the shinbone alone is about as long as the entire head-and-body length. Add to that the thigh and foot bones, and you have legs that are almost three times as long as the body itself, when extended. This gives a tremendous leverage that can rapidly translate muscular power into speed.

Among South African frogs there are several other great leapers, but the Sharp-Nosed Grass Frog seems – for the moment – to be the best. But not all the species we have here, have been tested for this.

Back to the frog jumping contest. After the jumping prowess of this Grass Frog had been discovered, one was sent – in 1955 – to the Calaveras Jumping Frog Jubilee. It was a tiny little thing, just 5 cm (2") in length. It was competing against bullfrogs three or four times as long as itself. The spectators laughed when they saw it. And the little frog did justify their ridicule, because it just sat on the starting pad, ignoring whatever was done to prod it into action. After thirty seconds without starting, it was disqualified. But then it jumped. Its first leap took it a distance of 4.2 m (14 ft) … the next leap took it into the crowd, which apparently made sure it could not make a third leap. But at any rate, the leaps were unofficial and thus never registered in the Jubilee's records. And immediately afterwards, they put a stipulation that all contestants must be over 10 cm (4") in length. These grass frogs never exceed 2.5" (about 6.5 cm) in head-and-body length. And so, the records remain with American frogs.

But frog jumping contests were held since then in South Africa as well, without such discrimination. And the current record held here at the moment, for the three-jump total, held by a Sharp-Nosed Grass Frog named Santjie, is 10.3 m (about 31 ft) compared to the 6.6 m (about 22 ft) which is the American record and sometimes claimed to be the world record.

Now, there might be other frogs in the world that can jump further, but so far I've not been able to get any clear and unambiguous evidence of any. Whatever the case, the Sharp-Nosed Grass Frog is at the very least one of the best jumpers in the world.

Belonging to the genus Ptychadena, this is one of several Grass Frog species occurring in South Africa. They are relatives of river frogs of the genus Rana – which in fact includes the American Bullfrog, Rana catesbeiana. But the Grass Frogs constitute a separate family with only three genera – though Ptychadena itself includes many species. Living in the savannah belt, they can be found in areas with tall grass or herbs, breeding in small, temporary pools and ponds. Their call is a high-pitched trill, emitted by twin vocal sacs – each emerging from a slit along the side of the lower jaw. These sacs expand and contract rapidly to produce the trill.

Sharp-Nosed Grass Frogs are widespread and currently not known to be threatened. But there is an extinction crisis affecting frogs worldwide at the moment, caused by a fungus and perhaps exacerbated by climate change and human alterations of natural habitat, and thus this species – and all others – needs to be carefully monitored.