Willem is a wildlife artist based in South Africa. He says "My aim is simply to express the beauty and wonder that is in Nature, and to heighten people's appreciation of plants, animals and the wilderness. Not everything I paint is African! Though I've never been there, I'm also fascinated by Asia and I've done paintings of Asian rhinos and birds as well. I may in future do some of European, Australian and American species too. I'm fascinated by wild things from all over the world! I mainly paint in watercolours... but actually many media including 'digital' paintings with the computer!" 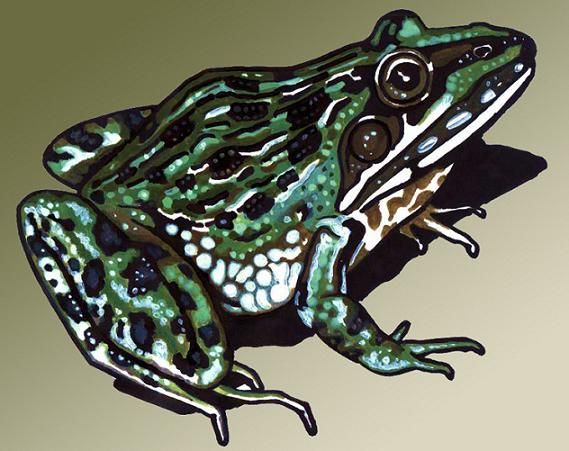 This is a painting of a Common or Angolan River Frog. I intended it for a children's book which is why it is somewhat cartoonish. The scientific name is a mess of confusion because we still know so little about frogs. It used to be called Rana angolensis, but now is called Afrana angolensis> or Amietia angolensis. Thus, it used to be classified in the same genus, Rana, as the 'common frog' of Europe, Rana temporaria … how I pity the Europeans who only have a single common frog species! … or the American Bullfrog, Rana catesbeiana. But the genus Rana was ridiculously large (in terms of number of species) and it turns out many of those were actually not closely related. Amphibians have been really, really neglected when it comes to closely studying them and their relationships. So the genus Rana has been broken up into several different genera … and in fact some of those genera might even belong to different FAMILIES! (For the taxonomically challenged: a family is a bigger unit of classification than a genus. So, for instance, wolves, dogs and jackals are different species, in a single genus, Canis. The red fox is a different species and also in a different genus, Vulpes, which contains several other species: the Red Fox is Vulpes vulpes, the Cape Fox is Vulpes chama, and so on. The dog family is a bigger unit still, and includes many other genera such as Otocyon, the bat–eared foxes, Chrysocyon, the maned wolves, and so on. Genera may have only a single species (those last two being noteworthy examples) but may contain many. But all foxes, wolves, dogs and jackals belong to a single and quite distinct family, the dog family, Canidae. Other, separate, families of carnivores are bears; raccoons and their relatives; cats; mongooses; and several more).


So basically what the scientists found was that some frogs that were considered as closely related to the 'common frog' group, actually as different from them as bears or raccoons are from dogs.


The problem is that frogs – and amphibians in general – tend to look very similar to each other. Well, to untrained human eyes that is. Once you start to get to know them you are staggered by how diverse they are. And there ARE frogs so weird some people may have difficulty recognizing them as frogs. Rain Frogs for instance are not at all frog–like in shape. And so are a few other more species from South Africa, and when you include the rest of the world there's some truly wonderful weirdness out there. But getting back to 'regular' frogs – and the Common River Frog is one of the most regular – they are what one could call 'conservative' in their general appearance. This word has a specific meaning when you're talking evolution. It essentially means 'winning formula'. The ordinary frogs have a kind of body that works so well that no radical changes to it have been necessary for millions of years. Frogs of that body plan have been around for about 200 million years! That means, short–bodied, large–headed, long–legged, and adapted for hopping. This build has been absolutely amazingly effective for all of that time, and suited frogs to a variety of different lifestyles. The big thing is that a frog can sit quietly and unobtrusively in one place, catching food as it comes into range, but when a predator appears it can hop away fast.


But while the body plan has not changed much for most frogs, over those 200 million years they have indeed been undergoing a vast amount of evolution. It has merely been masked by the fairly uniform external appearance. And in ways that will surprise most people, frogs do indeed differ greatly from each other. I shall not go into this here … I don't even know much about it myself. But the bottom line is that the world today has a bewildering number of frog species, of a bewildering number of different lineages, with a bewildering variety of subtle and not–so–subtle differences between them, and we are just beginning to scratch the surface in figuring out their true relationships. And there is so much about them that we still have no clue about.


Getting back to these specific frogs now. They are indeed in many ways very 'generic' frogs. They look like ordinary frogs and behave so as well. The name 'Common River Frog' of course only applies in those regions where they live, which is Suthern to Central and Eastern Africa, as far north as Ethiopia. The name 'Angolan River Frog' is even more misleading as they occur in all those other countries as well. Here in South Africa this frog is easy enough to encounter. They live in rivers in a huge variety of habitats. Actually, the adult frogs don't live in rivers all the time – but they are always found close to clear and unpolluted water.


I mostly see these frogs when I'm visiting the wonderful mountain mist forests of the Magoebaskloof/Woodbush region. Many streams flow through these forests. Their water is clear and perfectly drinkable – even better than tap water. A magnificent waterfall, the Debengeni Falls, is a popular tourist attraction in the area. Apart from the falls there are several more quiet pools, and in and around these you will easily find the frogs.


Not always adult frogs. Most will be tadpoles! These grow very large, two or three inches in length. I am not entirely sure, but I think they might take more than a year to mature in the cool water of the mountain streams. You will see these blackish tadpoles swarming in some of the more quiet pools. To find an adult you will need to look around on the banks of the streams. Walk about and you're sure to see one jumping into the water as you approach!


In the water they are wonderfully streamlined, fast and agile swimmers. They propel themselves with powerful thrusts of their long, slim hind legs. They will head for the soft slime and mud at the bottom in which they will hide themselves and may stay until you go away. Sometimes if you wait until the mud settles again you may see their eyes poking out of it, watching to see if the coast is clear!


But if you can spot one before it flees, and observe it for a while, you'll see an admirably handsome little amphibian, striped and mottled in green, brown, blackish and white, elegantly shaped with a neat, pointy snout. Their colour scheme can vary a lot in fact; some are more brownish, others greener; some are more boldly coloured than others. The adults reach a length of 8 cm/3" snout to vent. When extended their legs more than double this length.


These river frogs live around the town of Polokwane as well. They make use of human–created pools and ponds. Even when you don't see them, you'll hear them – if you're clever enough to recognize their call! It is not a ribbit, but rather a quiet, clicking rattle, followed by a short, soft croak. You'll have great difficulty locating a calling frog. It's not at all easy to figure out where the sound is coming from, and the frog will call from a carefully chosen hiding place. And it will stop calling when you approach too closely.


There are several other related frog species in South Africa. The Giant Bullfrog is probably a relative – indeed the Common River Frog is sometimes placed in a family with it, separate from many other visually much more similar frogs. The Sharp–nosed Grass Frog is a somewhat more distant relative.


I am very dissatisfied with how little we know about frogs – and also with how little we care and how much we are messing up their natural habitats! ALL frog species are to me wonderful and fascinating creatures. I will certainly share more frog pictures and info with you in this column.