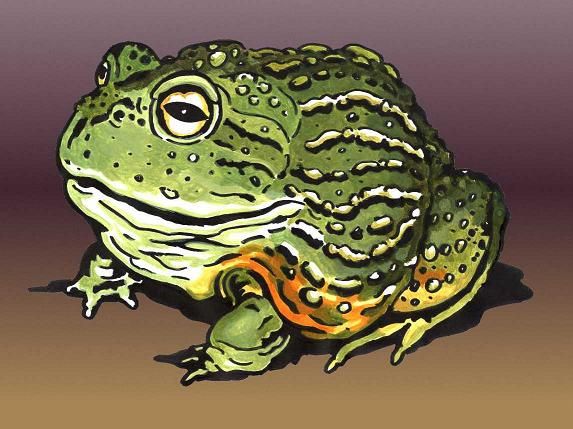 You can see the picture here is a bit cartoonish … I intended it for a children's book about frogs. But it's close to reality: the African Giant Bullfrog, Pyxicephalus adspersus, is a very big, fat, squat-bodied, huge-headed frog, the largest species in South Africa. The Goliath Frog, Conraua goliath, of West Africa is much bigger, though – indeed, it's the biggest frog in the world. Our bullfrog reaches about 25 cm/10” in length from snout to vent, the legs, when extended, doubling this length. It can reach a weight of 2 kg/4.4 lbs. Unlike the previous frog I spoke about, this one is not much of a jumper. In fact, it jumps only in emergencies, waddling most of the time. 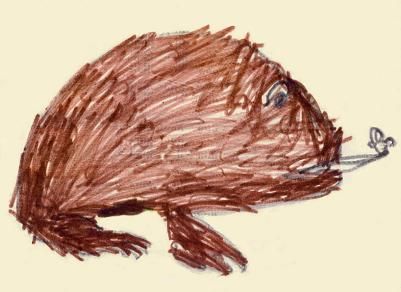 Here's another picture, a felt-tipped pen drawing. This one I drew when I was five years old! I was in the Queenswood kindergarten at the time, in Pretoria. For a time there were a couple of bullfrogs in a large, glass cage at the kindergarten. I was not much of a frog expert at the time, but I am sure they must have been this species, because if you look at my picture, you'll see the huge-headed, short-limbed appearance, which only this species has in our region. Also, they impressed me as being HUGE, which cannot be said for any other of our local species. I also remember it catching flies with its tongue, which you can see I depicted. The only thing that is a bit strange is that I drew it as being brown … and I remember it as being brown as well. In fact, the bullfrog is dull, olive greenish, with orange and yellow on its lower parts. But back then I might have interpreted this as being closer to brown than the bright green that was the only green pen colour that I had.

Giant bullfrogs occur in the high, dry interior of Southern Africa, from the eastern Cape, through practically all of the Free State, to the Northwest, Limpopo and Northern Cape provinces and from there to Zimbabwe, Botswana and Namibia. Seeing as these regions are very dry, bullfrogs are not out and about much. In fact, they spend most of the time buried a yard/metre or more below the surface, inside a cocoon formed from extra, sloughed-off layers of skin, enveloping them entirely – apart from the nostrils – like a plastic bag, which keeps them moist. Like all frogs, their skins are not watertight, meaning they will rapidly dehydrate if they remain exposed above-ground.

Only when the summer rains arrive, and water penetrates down to that depth, will the bullfrog be stirred into activity. It will burst out of the cocoon and dig itself out. Rains that penetrate to that depth are sure to fill up many depressions, which form shallow pools or pans that will retain water for at least a few weeks or a couple of months. It is in these shallow temporary pools that they breed. Males will congregate at suitable pools, fighting with each other and trying to attract females with their deep, bellowing calls.

During their fights, the males can become very vicious. They do not have true teeth, but do have a pair of sharp projections in the lower jaw. They wrestle each other noisily, splashing, grunting and trying to bite each other with these. Sometimes males even get killed during these fights.

The males that win get to mate with the females.

And now for the marvelous thing: the males of these frogs actually take care of the eggs and the tadpoles! One more example of how mammals and birds are by far not the only creatures to have parental care. What the male bullfrog does, is to stay with the clump of eggs – which hatch very quickly. The tadpoles then form into a tight, wriggling swarm, eating the algae that rapidly grow in these shallow pools in the hot summer months, as well as other vegetable matter or insects that fall into the pool – or aquatic insects like mosquito larvae. The male bullfrog will watch over the tadpoles and chase off predatory creatures, even ones much bigger than itself like humans! So it will offer protection against many potential tadpole-eaters like herons or marsh mongooses – OR other bullfrogs! The tadpoles will grow rapidly and within a month will metamorphose into tiny bullfrogs. These are very prettily marked and sometimes in the pet trade called 'pixie frogs'. Then they will jump off and from there will be on their own.

Most amazingly, the male bullfrog will even have a plan for when the pool dries out too soon. There will typically be a number of pools in one region, some bigger and some smaller. The smaller pools will dry out first, and if the tadpoles become trapped in one of them, the male will dig a channel leading to a larger pool, and safely herd all the tadpoles over to it.

Once metamorphosed the little frogs will be formidable hunters, eating insects and invertebrates and, once they're larger, small mammals, reptiles and even other frogs – including other bullfrogs! Like with all frogs, a great number of these will not survive to adulthood, but many will make it to the end of the rainy season, and dig themselves into the soil and stay there over the course of the long, dry winter, until the next season's rains arrive.

Once again, these bullfrogs are very special to me, because they breed around my town. To the east of Polokwane there is a small 'vlei' (a marsh region) which is a shallow but broad depression that fills up with rain every good rain season, forming ideal breeding conditions for bullfrogs as well as a number of other frog species. It is a wonderful experience to walk about the marsh in spring and hear all the different frogs in chorus! I've also seen young bullfrogs, and I've encountered adults going into and out of their underground lairs as well. The species is in danger as a result of human development destroying wetlands over much of its range.

Also these frogs are sometimes sold as pets, and are available in America, Britain and Europe. I am not much in favour of this sort of thing, but it is unlikely to harm local populations if small frogs – most of which in nature would die – are caught and sold. But selling them as 'pixie frogs' might confuse buyers when a few months later they find they have a huge monster on their hands! At any rate, here is an article about keeping them as pets, with a few nice pictures as well.

Since they don't seem to breed when kept as pets like this, it doesn't really help with conservation. If they can be kept and bred in zoos, it would be better.